Black youths in the inner city sound off about police patrols. Part IV of a continuing series.

By Mark Doremus, Milwaukee Neighborhood News Service - May 8th, 2013 12:37 pm
Get a daily rundown of the top stories on Urban Milwaukee

On a sunny weekend afternoon, a group of young African American men are sitting on a park bench at 26th and Medford on the city’s North Side. They’re talking about their experiences with the Milwaukee police.

A young man we’ll call “KJ” recalls his most recent encounter, the night before, around 8:00 p.m.

“We was sitting at the gas station. My guy was driving and he got his license, got his insurance, everything is good. Police there. We there. We take off. They follow us.”

Pretty soon the police turned on their flashing lights and stopped the vehicle.

“They pull us over and they ask us plenty of questions like, ‘Where you going to? You all related? Do you all smoke? You got no guns in the car?’ Just questions trying to get us nervous or something.”

According to KJ, the police had everyone exit the vehicle. Then they patted them down, all four of them, including a ten-year old boy.

KJ said one of the officers thought he recognized him. “The officer said, ‘I know you. I think I’ve arrested you before,’” KJ recalled.

“I said like, ‘I never been arrested. You ain’t never had me in cuffs and you never will.’ And he looked at me like he can’t wait to get me.”

After further delay, KJ recounts, “They put us back in the car and said, ‘you guys can go.’”

This is what Chief Edward Flynn’s proactive policing strategy looks like for some of the folks who are on the receiving end. Since he took over the Milwaukee Police Department in 2008, Flynn has targeted high-crime areas for extra police attention, ramping up patrols and dramatically increasing the number of citizen encounters with police.

Many big cities in America have adopted this approach to crime. The idea is to put police in contact with people who may be involved in criminal activity or have knowledge of a crime. Most of the encounters wind up going nowhere, like the traffic stop that KJ so vividly remembers. But sometimes police find contraband or run into someone who’s got an arrest warrant or turn up evidence of a crime.

Chief Flynn has acknowledged that, to carry out this strategy, police will stop and question a lot of innocent people. But he says that’s a price that must be paid if folks in high-crime areas want a safer, more orderly community.

And he cites police crime statistics as evidence that the strategy is working. “A 21 percent decrease in crime in Milwaukee over the past five years shows that our policing strategies are having an impact,” Flynn stated in a published report of 2012 crime statistics.

The question is whether the negative impact of proactive policing outweighs the benefits.

“So many of the encounters don’t amount to anything. Youth are left wondering ‘Why did they stop me in the first place?’” 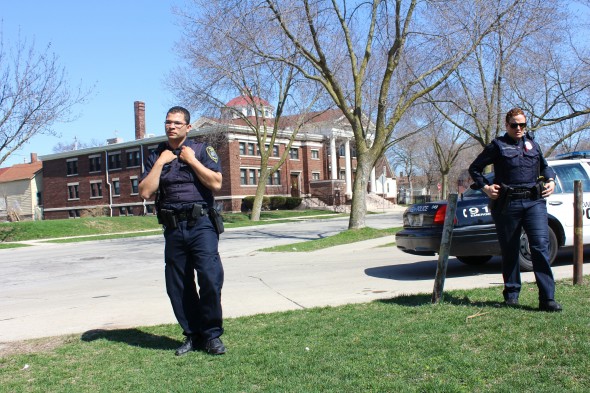 Police on a jump-out at 26th and Medford in Milwaukee. Photo by Mark Doremus.

“TJ,” another young man in the park at 26th and Medford, put it this way. “We can’t be chilling without the police harassing us. They can just pull up and jump out on us anywhere. They don’t need any reason.

“And then if you talk to them in a certain way they gonna’ jack you up, they gonna’ fold you up. The reason they try to do that I think is because you be around your family and they just want to prove their point. When there really ain’t nothing to prove.”

In other words, in TJ’s view, the goal is to intimidate as much as investigate. Police might call it deterrence: be visible, be active on the street and you discourage bad behavior.

And, to be sure, there’s bad behavior on the streets of Milwaukee’s poor black neighborhoods. Groups of young people, roaming the neighborhood or loitering on the corner, can be intimidating and disruptive even if they aren’t engaged in serious criminal activity.

“When the weather is good, if you come through the black community you will see hordes of young men with nothing to do, nowhere to go, walking the streets almost aimlessly,” observes Rev. Willie Brisco, president of Milwaukee Inner-city Congregations Allied for Hope (MICAH).

“It’s really difficult for young people to find a release. Your parks close early, the lakefront shuts down. There are no organized activities that are geared toward youth,” Brisco said.“ So in the summer when you have temperatures in the nineties, those are just powder-keg moments and people are stressed out and you have them feeling like they’re trapped in a limited area.

“There is no community that would not be in chaos without a competent, well-trained police force,” added Brisco, who had a career as a Milwaukee correctional officer. “I want to make it clear I’m not against policing. But it’s like poking a stick in a hornet’s nest. You have an angry, volatile situation that you continue to exacerbate with a method that seems invasive. It gives you the feel of an occupation.”

Aerion King, 17, is a member of Urban Underground. By his account, he’s had his share of negative encounters with police.

“When I was little I looked up to them. They was going to stop everybody from getting robbed. But then when I got older they started acting like you can’t tell them nothing.

They get smart and you get smart back at them and it always ends up bad, you get in trouble.”

Quintin Smith, 17, is also a member of Urban Underground. He says he had a run-in with police last fall.

“We was just standing on the corner talking. It was me and two of my friends, there were three of us. It was seven or eight o’clock and they stopped us and it was like, ‘You have to move around. You can’t just stand here.’ And so we said, ‘Okay, whatever,’ and we was walking on and they was following us. To make sure we were leaving.

“To be honest, lot of the inner-city minority community, they are taught that the police will stop you for whatever reason they deem worthy of stopping you. So with that mind you’re always on the lookout for situations like this. No matter what time of day when the police is around you might get stopped. So this day it was like, ‘They might stop.’ It wasn’t a complete shock.”

Before she was appointed to the Fire and Police Commission, nominee Ann Wilson was quoted saying the relationship between the African-American community and the Milwaukee Police Department is “tenuous to say the least.” She declined to elaborate but if you talk to African American youth in Milwaukee, you begin to see what she means.