Three Bridges Park and the extension of the KK bike trail will bring excitement -- and great biking opportunities -- to the city.

By Dave Schlabowske, Bike Federation of Wisconsin - May 17th, 2013 10:52 am
Get a daily rundown of the top stories on Urban Milwaukee

The bad news for Milwaukee is that the legislature could leave all attacks on local control and cuts to bicycle funding in the state budget. Even the Legislative Fiscal Bureau predicts those political power grabs will hurt the city’s residential and business taxpayers. The good news is that some incredible new bike trails and parkland are nearly finished thanks to good local urban planning leveraged with relatively small investments of public funds.

Paving crews put down a lift of fresh asphalt on the north segment of KK River Trail between Maple and Washington Streets.

The long wait for the Kinnickinnic River Trail is nearly over, with paving already done from Washington to Maple, and the south leg from Lincoln to Rosedale under construction. I know more than a few folks in Bay View and Lincoln Village who have almost given up on that project ever being built, but they should be able to ride the north leg by Memorial Day and the full length of the trail to S. 6th Street and Rosedale Avenue by the fall. The time needed to construct a new bridge over Chase Avenue is the reason the south segment will not open sooner. 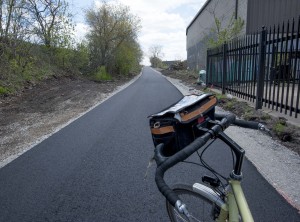 Click this link to view a Google Map I created of the Kinnickinnic River Trail. The map also shows the section of Washington and South Water Streets that will be improved for bicycling as part of the Bay View to Downtown Connector (the sad alternative to a bikeway over the Hoan Bridge).  As the Milwaukee Metropolitan Sewerage District continues to remove the concrete lining of the KK River to the west of 6th as part of their flood abatement project, the trail will be extended west as well.

Please note that even though the north segment of the KK River Trail is paved, construction is ongoing, so it is not open yet. I spoke with the construction supervisor from Milwaukee DPW, and he thought that segment of trail might be complete and open by Memorial Day, but he added both Washington and Maple Streets are slated for full reconstruction projects. While those roads are being improved (and they need it) getting to the trail will be difficult or impossible until later this summer. People are advised to stay out of active construction zones.

A rendering of the future KK River Trail bridge over Chase Avenue.

Perhaps even more exciting is the opening of Three Bridges Park, the new 24 acre park, between the Mitchell Park Domes and the Menomonee Valley Passage in an abandoned former rail yard from about 27th to 35th Streets along the Menomonee River. The park will be operated through a partnership of the city of Milwaukee and the state Department of Natural Resources. Two new bridges will dramatically improve access to the new park, the Hank Aaron State Trail, the other recreational opportunities, and of course, to all the new businesses and jobs created recently in the Valley.

The bridge, still under construction, to Mitchell Park Domes from the new park the Menomonee Vally.

The two new bicycle and pedestrian bridges will be at 33rd Court (behind Palermo’s Pizza and nest to Falk) and from a new hill in the park up to the Mitchell Park Domes. The new Menomonee Valley Park will also have community garden plots and will provide access to the river for fishing and canoeing. The wet spring had delayed plantings and some other landscaping, but the grand opening of the park is still scheduled for July 20th.

The new bridge over the Menomonee River into the park from behind Palermos.

The park is being built on a site that is too narrow for commercial development, according to Laura Bray, executive director of Menomonee Valley Partners. MVP has been leading the economic development and environmental restoration of the Valley. Many employees of companies in the valley already take advantage of those amenities, Bray says. ”Those amenities have become a great tool for recruitment and retention of employees,” she adds. Who wouldn’t want to work at a company where you can walk to a Brewers game, go for a bike ride through a prairie or fly-fish for trout without moving your car after work?

The sad days in the Valley.

I think of my grandfather, who proudly worked in the Milwaukee Road Shops, an enormous complex that made rail cars and locomotives for the Chicago, Milwaukee, St. Paul & Pacific Railroads, and sadly grew up watching the Valley erode into empty, polluted brown-fields. Compared to those days, the transformation of the Valley around the Hank Aaron State Trail has been almost magical. Anyone who drove I-94 west of downtown looked down on the empty shells of factories and our city’s most visible eyesore. Since the trail was built and the investment was made to reclaim about 300 acres of brownfields, more than 35 companies have moved to the Valley, investing hundreds of millions of private dollars. One million square feet of green buildings and seven miles of trails have been constructed, and 45 acres of native plants installed, leading to improved wildlife habitat, improved water quality, increased recreational opportunities in the heart of an urban center, and at the same time creating more than 4,700 family-supporting jobs. 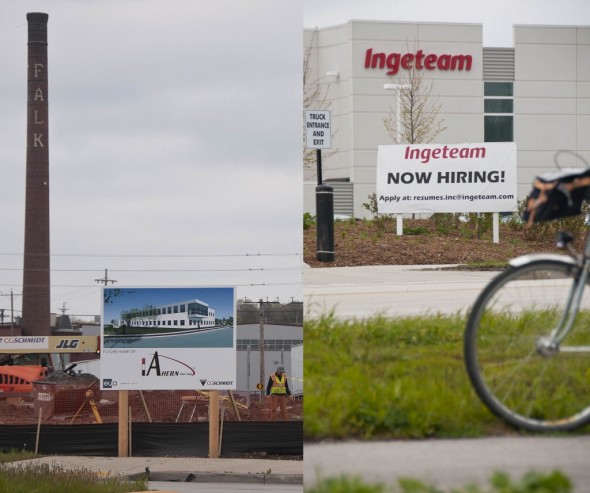 New jobs along the Hank Aaron Trail in the Valley

The Kinnickinnic River Trail and the new park and segments of the Hank Aaron State Trail in the Menomonee Valley were planned and funded before the current leadership in the State Capitol started their “war on Milwaukee,” and thankfully momentum will carry the projects through to completion. Although it is a smaller project, the KK River Trail should help to revitalize the corridor and neighborhood it runs though, much in the same way the Hank Aaron State Trail helped spark the economic reinvestment in the Menomonee Valley. 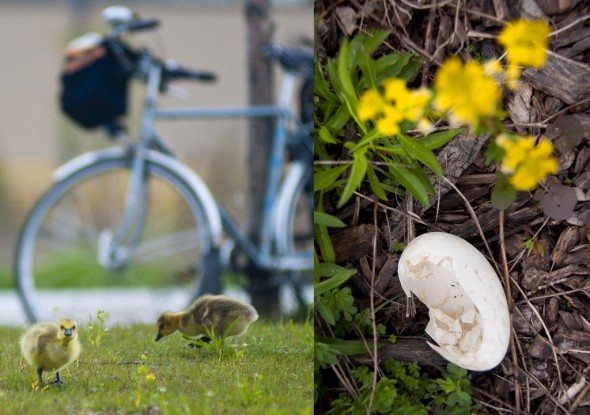 New life in the Valley. These little guys should help you forget about the bullies in Madison long enough to make you smile.

So if you live in Milwaukee and have been feeling a little beat up on lately, I hope you can take some solace in the great new park and trails you will have to ride in. As you pedal through them, you can also feel a little better because of all the jobs and revenue the public investment in those trails and parks has brought to our city and the state. Hopefully the positive momentum of our state’s most populous and economically powerful community can keep us moving forward despite the drag from the political over-reach we are fighting. Milwaukee remains the most diverse, cosmopolitan, and culturally vital urban center in Wisconsin and it is still a great place to live, visit, work, do business, and of course, ride a bike.