In the digital age, this shop still collects the real thing: old books that collectors treasure. 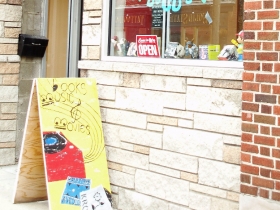 The sign Troka painted welcomes customers to the store, which is situated in the 1913 Brickyard Building. Photo by Peggy Schulz.

Bay View Books & Music may have the perfect location: it’s nestled into a spot on the 2600 block of S. Kinnickinnic Ave. that may be the busiest section, the crème de la crème of this bustling retail strip. The book store is on the ground level of the Brickyard Building, built in 1913. Surrounding that building are retail establishments as varied as Heavenly Kidzz, a children’s clothing store; Solid State Tattooing Co.; Pipe Dreams smoke shop and accessories; Kathy’s Green Creations, featuring recycled, wearable art; and what is thought to be the oldest commercial spot in Bay View, Price Right Gifts, at 2664 S. KK. Historic photos inside that combination snack and gift shop, now also selling pipes, show the storefront not much changed since the early part of the 1900s. 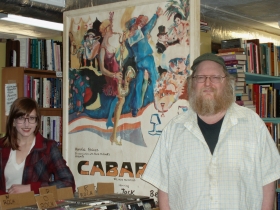 A recent acquisition of a “Cabaret” poster from its days on Broadway lights up Bay View Books & Music, along with Phie Troka and Dan Dehling. Photo by Peggy Schulz.

The store sells a wide variety of used and like-new books and music, including a healthy selection of vinyl. There are three other music outlets nearby, but Dehling says they all help rather than compete with each other. “We’re interconnected,” he says. “We advertise for each other.” Dehling makes it a point to patronize the other stores around him, too. “I probably spend 80 percent of my income on this block.” Events such as the Bay View Bash in September help all of the businesses in the area.

The key to success for any used book seller, Dehling feels, is “condition, condition, condition.” That is, being able to acquire used books at reasonable prices that are in good to excellent condition, so that re-sales, whether in-store or on-line, are profitable. The store’s business is balanced fairly equally between the two venues, Dehling says. Every book that’s listed on-line is physically in the store, although those that are on the more collectible end of the spectrum are kept behind the counter. A concept called “shelf wear” can pretty quickly turn a $1,000 book into one that might sell for only ten bucks if handled often enough by casual customers who might not appreciate the true value in their sometimes less-than-clean hands.

Collectors hope to find nice pieces, as Dehling describes them – old, oftentimes rare books that are in excellent condition. But, those collectors usually are willing to start with what’s known in the business as a filler copy, meaning the would-be collector has a copy of the desired book to start with, regardless of its condition, and is willing to wait and work up to something much more precious.

Dehling attributes much of his current success to his now full-time assistant, Stephanie “Phie” Troka, who started working for Dehling on a contract basis, painting the easel-style sign that sits on the sidewalk in front of the store, about a year and a half ago. Troka handles most of the on-line posting of books, including a recent major project where she condensed the listings, purging most of the non-movers. The store’s website is operated through Abe Books. Some day Dehling and Troka hope to get all of the stock in the store that’s valued at a minimum of $10 listed on the website. 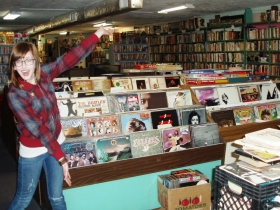 Vinyl lovers can find plenty to please their ears, as Troka demonstrates. Photo by Peggy Schulz.

Both are down-to-earth, yet hopeful, about the realities of selling used books. Dehling is encouraged that in the store, books still outsell music. And Troka’s face lights up when she talks about positive experiences with customers, even miniature ones. “A little boy, maybe 3 or 4, came in with his mom and was looking for a book on whirlpools,” Troka says. “He kept tugging on his mother’s pants, asking her to ask me for different things.” He couldn’t read, Troka says, but he still found great delight in many of the books in the store.

One of Dehling’s favorite anecdotes about the used book business dates back to the Prospect Mall location. “A picker guy walked in with two first editions of ‘Atlas Shrugged,’ with dust jackets,” Dehling recounts. “Picker guy” is a term for someone who frequents rummage sales and stores such as Goodwill, trying to pick out items that might be of resale value to a store such as Bay View Books & Music. The store initially paid the picker guy $50 for each book. After those two copies sold to collectors for $650 and $580, the picker was paid an additional $100. 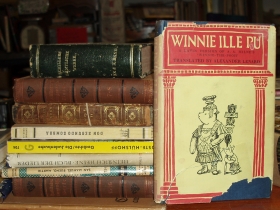 Neither Dehling nor Troka are in it for the money. One other short-term hope Dehling has is to simply stay in business. “Our original goal was to hit $100 in sales, in the store, per day,” Dehling says. That happens fairly often, but slow days are common, too. Dehling offers a rueful quip on the business he loves: “I think all booksellers end up living in a room surrounded by books they thought they could sell.”