I-94 could be straightened to run through current Miller Park parking lots. Brewers are open to this option.

By Gretchen Schuldt, Wisconsin Justice Initiative - Mar 11th, 2013 10:38 am
Get a daily rundown of the top stories on Urban Milwaukee

The parking lots at Miller Park could provide an alternative way to expand the freeway through the center of Milwaukee. 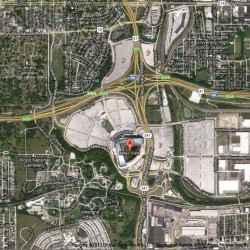 Some Story Hill residents and elected officials are urging the Wisconsin Department of Transportation to use that option for future reconstruction or expansion of east-west I-94 to minimize the freeway’s impact on the neighborhood. This would involve straightening or partially straightening the bend in I-94 where it curves north around the Miller Park parking lots, which are used mostly for 81 home games during the baseball season. Straightening the freeway also could lessen reconstruction / expansion impacts on the Story Hill neighborhood from the proposed double decker freeway.

“I’ve heard the Brewers express two expectations,” Duckett said in an email.  “They would like the new design to work as well as the current situation (as far as loading and unloading the parking lots) and they would like to maintain the same number of parking spaces. I think shifting I-94 may still allow WisDOT to fulfill both of the Brewers objectives. As long as the Brewers objectives are considered, I can’t think of any major Brewer or District concerns related to shifting I-94 to the south.”

The Milwaukee Brewers referred questions about the proposal to Duckett.

A WisDOT official said at a recent Story Hill Neighborhood Association meeting that shifting I-94 to the south could be costly if WisDOT builds freeway bridges through the stadium parking lots to preserve parking spaces underneath them.

A WisDOT representative said last week that “WisDOT is quantifying both the amount of potentially affected (lost) parking, and any opportunities to replace that lost parking elsewhere. One strategy (of many) could be to replace parking underneath new bridges, but other strategies are being investigated as well.”

A parallel situation occurred downtown: Several hundred parking spaces used by county employees were eliminated when the Marquette Interchange was reconstructed. Urban Milwaukee asked WisDOT in an email about the differences between the Marquette and I-94 projects when it comes to the priority given to preserving parking. The agency did not respond to the question.

“In politics you have to play hardball,” Carpenter said during the Story Hill Neighborhood Association meeting. Miller Park is financed through a sales tax and if the Brewers and Stadium District resist the parking lot option, “we’re just going to have to push for legislation to end that stadium tax and they can pay for it with a ticket tax,” he said.

Ald. Michael Murphy, who represents the area, said he believed the parking lot proposal would be “politically overruled by the Walker administration” if it is more costly than other options, even if those are more damaging to the surrounding neighborhoods. “Anything that costs any extra and that might benefit the city is immediately shot down,” he said.

Correction: Through an error in editing, an earlier version of this story suggested the alternative route could mean a double decker freeway wouldn’t be needed. That is is incorrect.

Gretchen Schuldt is a Story Hill resident who opposes a double decker freeway.