A new coffeehouse on Wisconsin Ave. is run by an expert barista and jazz drummer. 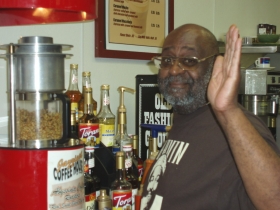 Tantalizing aromas of freshly roasted coffee and jazzy background music draw in customers to the CITY.NET Café at 306 E. Wisconsin Ave.  The cafe opened for business on February 22.  Many visitors to the cafe, now occupying the former Dunkin’ Donuts location, express a “finally” sigh upon talking to owner Sam Belton.  Belton acknowledges that the “opening soon” sign was on the store window for almost a year.

The café isn’t a new endeavor for Belton.  He has run a similar coffee shop on the lower level of the Milwaukee County Courthouse for five years.  And, Belton operated CITY.NET Café at 72nd and Burleigh for several years before making the move to downtown.  “It was economics,” Belton says, that caused him to relocate.  “The neighborhood just wasn’t supporting it.”

While coffee is one of Belton’s current passions, it’s not his first love.  That distinction goes to music, specifically, jazz.  As a jazz percussionist, Belton plays with other jazz musicians around Milwaukee. Before becoming a barista and entrepreneur, he was a music teacher in Milwaukee’s inner city.  World travel is, perhaps, Belton’s second love, reflected in a variety of posters adorning the walls at CITY.NET.  That travel, and trips to African nations through his religious work with Spirit of Truth World Ministries, also exposed Belton to the concept of an Internet café, in cities such as Paris, London and Amsterdam, as well as the world-class coffee beans grown in many countries on the African continent.

“In the last 12 years, I really got into coffee,” Belton says.  “I traveled extensively with ministry in Africa and Central America.  I picked up a strong interest in coffee and how it’s produced.”  Belton notes that coffee originated in Africa.  “The whole continent is really rich in coffee.”

Belton does all his own roasting, using a wide variety of beans, under the name Abyssinia Coffee Roasters.  He attended a number of roasting workshops and completed a course of instruction at American Barrista School in Portland, Oregon.  Recent daily special coffees at his new café included Mexican Chiapas, Kaui and Tanzanian PB.  PB stands for peaberry, and is a smaller-than-average coffee bean.  Other African nations represented in the café’s offerings include Rwanda and Ethiopia.

The on-site roasting is a great convenience for customers who might want to buy a pound of coffee, as well as a bit of free advertising, as the aromas waft out the door.  “We give people the freshest coffee they can possibly get,” Belton says.  The relatively small roaster sits close to the door.  It uses hot air to roast the beans in a glass coffeepot, as opposed to the drum roaster style used by many local coffee shops.  “My customers know that other local outlets are not going to cater to them,” Belton says.  “Here, we roast while you wait.”  Roasting time depends on the bean, but generally one pound of coffee is ready within 15-20 minutes. 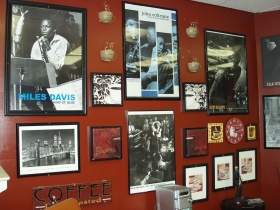 After just two weeks of operation at the Wisconsin Ave. location, CITY.NET already has a good number of regulars, largely due to its location and strong word-of-mouth advertising.  One late-afternoon customer commented:  “You guys just opened up?  Nice location, nice store.”  Another, a security guard at a nearby office building, said that two cleaning ladies in her building already had sampled – and enjoyed – the turkey sandwich offered on CITY.NET’s menu.  Yet another coffee fan, already well known to Belton, works at a nearby parking ramp and was quick to buy a second cup to go for a co-worker.

Belton is hopeful that his business, along with the relatively new Hilton Garden Inn, just south of Wisconsin Ave. on Broadway, and Power’s Jewelry, just across the street, and the Marriott Hotel opening on Milwaukee Street, will be part of a revitalization on the eastern end of Wisconsin Avenue.  Belton’s business experience at both the Courthouse and Burleigh St. locations should help him gauge the needs and desires of customers.  The chairs are comfortable, the décor is soothing and the free WiFi is as good an excuse as any to settle in with a cup – or two – of freshly-roasted java.

In addition to a good variety of coffee and espresso drinks, CITY.NET offers unique “SAMiches,” salads and desserts, some made in-house.  “I’m a barrista,” Belton says, explaining the split of work with his daughter and his few employees.  “My passion is the coffee.  My daughter and the others primarily handle the food.”

One thought on “City Business: A Jazzman’s Cafe”