You’ll find a wonderful variety of restored and reclaimed items. And the profits help build homes for the needy. 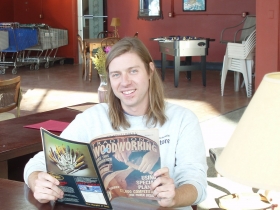 If you don’t see something you like at Habitat for Humanity’s new ReStore location at 420 S. 1st St., just wait a few minutes.  It’s likely more items will come through the door before you leave.  Be it gently-used furniture, a possibly valuable piece of artwork hidden at the back of an otherwise worthless poster, or a new door chime for your front door – you have to keep checking back to stay on top of what’s available.  Jake Brandt, ReStore East store manager, says 60 percent to 70 percent of arriving merchandise is sold the same day, and virtually all of it within a week.

Habitat for Humanity opened its first ReStore in Austin, Texas in September 1992.  The idea was to take building materials left over from Habitat build sites and sell them to the public, recycling the proceeds back into the Habitat program, whose mission is to build and renovate homes for families and individuals in need of sustainable housing.  From one location to now roughly 500 stores across three countries, the ReStore concept has proved a big success.  Wisconsin is home to 17 ReStores.

The ReStores, as part of Habitat, operate on a non-profit basis.  But, make no mistake, this is a thriving business. And for-profit businesses can be important suppliers. Several shelves full of paint brushes at ReStore East came from a “big box” store because the UPC codes on them were incorrect, and it was cheaper for the store to donate them than ship the stuff back to the manufacturer for re-tagging.  Another shelf in the building materials area holds a stack of new sinks — given by a rental property manager who’d over-ordered and had no use for them.

Many, although not all, such donations to ReStore are tax deductible.  What’s more, ReStore figures prominently in keeping tens of thousands of pounds of building materials and other items from being dumped in landfills.  Much of the unopened paint available for sale at ReStore East, along with other home finishing products, were left behind by Benjamin Moore, the ReStore space’s previous tenant, when it downsized and moved to a smaller location at S. 1st St. and National Ave. 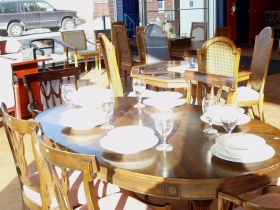 Such donations to ReStore are a “win-win” for everyone, Brandt says.  “The business gets a tax write-off, our customers get the goods at a reduced price, the environment doesn’t get dumped on, and the money we make on sales goes back to help build the community through Habitat for Humanity,” he says.  Habitat home owners get a 20 percent discount at ReStore, as well, he adds.

ReStore West is now on N. 114th St. in Wauwatosa, having moved from its original location on Hawley Rd.  It has been known for years as a great source of building materials for area home owners.  Restore East also has a healthy offering of doors, toilets, sinks and cabinetry, but aims to focus more on quality used furniture.  The floor-to-ceiling glass windows in the former Benjamin Moore paint store provide shoppers with a great view of what’s available.  ReStore East rents the space from the owner of ComedySportz, located at the eastern end of the former industrial building.

Brandt says the high visibility of the S. 1st St. location was one reason to locate there.  Habitat wanted to expand its ReStore business and Walker’s Point was deemed the best neighborhood in which to do so.  “It’s a budding neighborhood,” Brandt says, “and convenient to both home owners and donors.  We want to expand our reach in the community.” 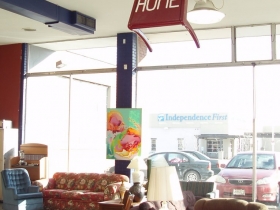 ReStore East also has two important community partners that broaden its ability to gain something financially from virtually every donated item.  For un-sellable items such as clothing and broken electronics, two companies, Recycle That and Vintage Tech Recyclers, will buy items from ReStore and then either re-sell or recycle them.  At Mayfair Mall from April 13 to 20 a large recycling drive will be held by ReStore and Vintage Tech Recyclers, the company that deals with broken electronics.  That event is part of ReStore’s Earth Week celebration.

ReStore East had its “soft” opening on January 18, as part of Gallery Night in the Third Ward.  It will hold a grand opening March 2.  To ensure the store is well-stocked for that event, a “stock the store” campaign is going on now, through February.  Brandt hopes this will raise awareness in the community about ReStore and its function in supporting Habitat for Humanity.  “We’re stocked completely by donors,” Brandt says.  “We’re not a name like K-Mart where you know what to expect.”  And, for the fourth year in a row, the Recycled Art Contest, which encourages artists to use materials purchased from ReStore, will take place in March.  Entries are due by March 5.

In 2012, ReStore in Milwaukee realized sufficient income to completely fund two Habitat for Humanity homes, another win-win for this community. Get more information at milwaukeerestore.org.