Queen of the Animals

Jessica Huber helps MADACC find volunteers -- and defend it from charges of “murder.” 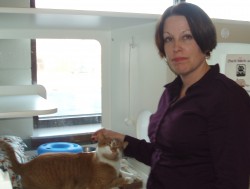 Jessica Huber visits with Henry in his “cat condo” in the MADACC lobby. Photo by Peggy Schulz.

Jessica Huber’s job description is four pages long and her job title isn’t exactly short. She is the Community Outreach and Volunteer Coordinator for the Milwaukee Area Domestic Animal Control Commission and has held that position for less than a year. As the first person to hold the job, she is something of a trailblazer, helping determine the job’s parameters. Inside MADACC, she oversees its many volunteers, often animal lovers like herself. Externally, Huber has to deal with its detractors, who at their worst may accuse the group of murder because it must at times euthanize animals.

Huber lives in the Sherman Park area and taught school in the city for 10 years, at Madison, Marshall and Rufus King High Schools, before coming to MADACC. She always had a fondness for domestic, furry creatures (her mother was a volunteer at animal shelters), and early in 2012, Huber fostered a dog through MADACC. “That wasn’t enough,” she says, to satisfy her love of animals. So, she applied for her current job.

MADACC’s mission now is a dual one – “To provide animal regulation and care services which protect the health, public safety and welfare of the people and animals in Milwaukee County.” At times, that directive means that stray animals, especially when they’re old, ill-tempered and/or diseased, are euthanized. It’s a marketing challenge Huber confronts as she works in the community to recruit more volunteers and establish partnerships that will result in more animals being saved. 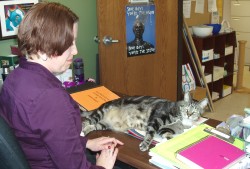 While coordinating the many MADACC volunteers, Huber works with dog walkers, cat socializers and special event planners. She works to match up fosters and animals in the animal foster program. The foster program has become a key factor in the agency’s growth from a strictly “stray/hold” facility to one that now does a fair number of adoptions. “I like seeing foster animals go out,” Huber says, “on the way to them finding forever homes.” Most animals, though, still leave MADACC via transfer to its placement partners.

MADACC is a government commission. In its role with the 19 municipalities it serves, it’s required to take in all stray animals that come to the facility, at 3839 W. Burnham St. “MADACC was never intended as a facility that would do adoptions,” Huber notes. “The adoptions came about when finders of animals inquired about adopting an animal, if it went unclaimed, that they had brought to us,” Huber says. At that point, MADACC began working through an exclusive contract with the Wisconsin Humane Society, and then added other shelters and rescue groups, transferring animals from its organization to those that focused on adoptions.

It sometimes difficult for Huber to remain objective when she talks about how animals are treated: the occasional dog that is left tied to MADACC’s doors after hours or the animals that are left behind in residences after their owners are evicted. “The summer I started, we had a stray bull dog brought in, named Luna,” Huber says. “We learned she had been stolen from her owners five years previously, in Miami, Florida.” And when almost 250 snakes, lizards and other reptiles were taken out of a south side Milwaukee home in 2010, they all were brought to MADACC. Many were saved by sending them to zoos and other institutions across the country. MADACC also offers a temporary “safe keep” program for pet owners facing challenges — house fires, evictions or even jail time — that temporarily prevent them from taking care of their animals. 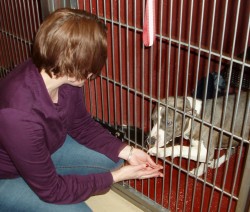 One of the many Pit Bulls temporarily housed at MADACC looks for attention from Jessica Huber. Photo by Peggy Schulz.

Her community outreach event can help clear up misconceptions. At the Hamilton-Sussex school district’s “Club Action,” which showed the film “Beyond the Myth,” about Pit Bulls, Huber talked with students about the issue. She was accompanied to the program by Pearl, a three-legged Pit Bull. “Pit Bulls once were America’s dog,” Huber says, the way Labrador Retrievers might be considered today. Huber is happy to report that Pearl has been adopted since accompanying Huber to the student event, and is now in a safe, “forever” home.

Huber is aware that some critics believe MADACC is not upfront about the number of animals it euthanizes on a month-to-month basis. Some on-line commentators and Facebook posters insist “euthanasia” is really “murder.” “We are honest with people when they bring in animals,” Huber says. “The time and space in our shelter, the animal’s health and temperament – all of these factors contribute to whether we can save that animal, or not.” Huber says the biggest misconception she deals with on a regular basis is, “Don’t take animals to MADACC, they’ll be killed.” In fact, the fostering program and evolving adoption program do find homes for many animals, though it’s still not possible to save every animal brought to MADACC. Many more homes and loving owners are needed, particularly for Pit Bulls and adult cats, Huber says. “They are the hardest animals to place.”