The downtown ambassador helps visitors, prevents crime and answers questions -- but won’t help you get a date. 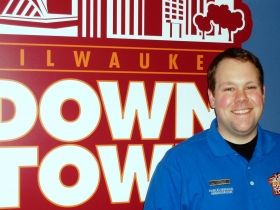 The home office for Justin Miller and all the Public Service Ambassadors is at the BID #21 offices at 600 E. Wells St. Photo by Peggy Schulz.

“I like to smile and interact with people,” says Justin Miller. Good thing, because his job –as Public Service Ambassador for Milwaukee Downtown Business Improvement District #21 — calls for a lot of that. As Miller puts it, “the core of our job is letting people know we’re out there to help them.”
He’s been with the program for just over six years, now works as a supervisor, and says, “God willing, I’ll be here for at least another six.  It’s a one-of-a-kind job.”

From January through February, ambassadors are on the street from noon to 8 p.m.  From March through December, the hours are 2 to 10 p.m.  During the holiday season, the ambassadors also staff the “Jingle Bus” that provides tours as part of the Milwaukee Holiday Lights Festival. At peak times, the number of ambassadors on duty runs from 10 to 15; during off-peak hours, about 5 to 8. Such events as Bastille Days and Jazz in the Park often require more ambassadors.

The Public Service Ambassador program is financed by BID #21, which started it in 2000, but the staff are actually employed by the G4S security company that contracts with the BID.  The ambassadors, however, are not security guards though they sometimes act as observers who tip off police.  “We stay in close touch with the MPD beat officer downtown,” Miller says. He recalls one instance when an apparent shoplifter ran past him from a downtown store. He quickly radioed his dispatcher and Milwaukee police were contacted.  Just the uniforms the ambassadors wear can help deter crime, Miller believes, which in turn helps the city. “If someone’s car gets broken into, they might think twice about returning to downtown.” 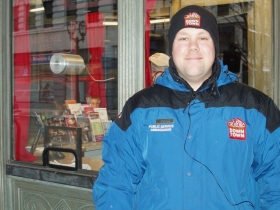 Justin Miller awaits visitors to the Visit Milwaukee information booth at 214 W. Wisconsin Ave., which was once a movie theatre, and now is staffed by the Public Service Ambassadors. Photo by Peggy Schulz

Miller also maintains relationships with storekeepers and employees, all the “regulars” on his routes. The ambassadors also note quality-of-life issues that need attention.  Whether it’s newly-painted graffiti, malfunctioning parking meters, burned-out street lights or the odd broken store window, the ambassadors pass on the information to the dispatcher, who alerts the proper authority.

All the ambassadors also have smart phones with built-in GPS devices, which helps the dispatchers monitor their locations.  “What’s your 49, please?” is the dispatcher’s way of asking an ambassador’s status and location.  The check-ins happen roughly once an hour.  As a shift supervisor, Miller helps ambassadors on duty with any problems or questions. On a recent icy, weekday afternoon, that included helping one ambassador essentially defrost his smart phone.  The ambassadors’ phones come in handy to answer inquiries from downtown visitors.

“Certain things you remember after a while,” Miller says, such as the fact that City Hall was built in 1895.  But perhaps you weren’t aware that the wingspan of the Calatrava addition to the Milwaukee Art Museum is 217 feet?  Then there are those unanswerable questions.  Miller, with his almost cherubic smile and wind-reddened cheeks, seems embarrassed to admit he gets asked for a good place to find a “date.”  But, he’s never been asked if he knew Jeffrey Dahmer.  “The oddest, most common request I’ve gotten is ‘How deep is the Milwaukee River?’” Miller says.  “Oh, and ‘How many George Webb restaurants are in Milwaukee?’” 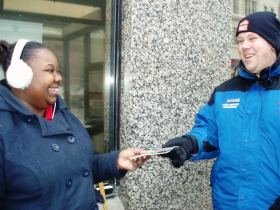 Andrea Brown is happy to receive an information packet from Justin Miller while she waits for a bus on W. Wisconsin Ave. Photo by Peggy Schulz

Visitors offer compliments, too. “People tell me Milwaukee is a very clean city. I don’t know what they were expecting, or what it’s like where they’re from.”  Other visitors  – and he’s talked to thousands over his six years as an ambassador – appreciate the old style buildings like City Hall.  Those from from newer cities, Las Vegas or Phoenix, don’t see many older buildings.

Miller is a Milwaukee native. He graduated from Whitefish Bay High School and now lives on Layton Blvd., near the Mitchell Park Domes. He worked for a few years for a Salvation Army store prior to becoming an ambassador.  “I was looking for something like this,” he says, “with a little bit more customer service, the chance to be outside and to help people.”  He also likes the exercise he gets, noting that the ambassadors cover 124 square blocks downtown. “I’ve never come to work and felt, ‘I really can’t do this today.’  It’s very fulfilling for me to help people. It’s a calling in life for me.”