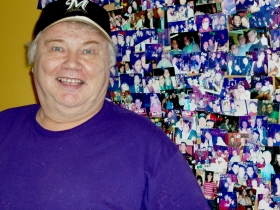 Real Chili is uniquely Milwaukee. The two locations – Marquette and East Town – serve just one type of chili (“mild,” “medium” and “hot” ratings are based on the quantity of meat sauce), along with hot dogs, a few subs and nachos.  James Stocks, who’s been behind the counter at Real Chili longer than any other worker, is equally distinctive in his implacably positive attitude; he can make almost anyone smile.

While Stocks admits he’s not as quick getting around behind the counter as he was when he started, he isn’t ready to retire, though he’ll turn 62 this year.  2013 marks his 27th year here; he’s as much of a fixture at Real Chili as the “Marquette” – beans and spaghetti – and the bottomless bowl of crispy oyster crackers.  Virtually his entire working career has been in food service, including a long stint at the former Marc’s Big Boy on Prospect and North (now Jalisco’s) and the Ham N’ Egger on 12th and Wells. Stocks started with Real Chili at the Marquette location, near 17th and Wells, and has been at the East Town site for the better part of three decades.

Stocks has a simple approach to how he got hired — and to life. “The only way to learn is to ask,” he says.  In 1986, he noticed the Help Wanted sign at the Marquette Real Chili.  Stocks was employed at the time, but thought a little extra money wouldn’t hurt. He was hired almost immediately.  Once he started working, he told the 18-year-old manager he just wanted to do something simple, such as wash dishes. “No, no, you’re too good,” the manager, then almost young enough to be Stocks’ son, said.

Former Real Chili owner Dan Helfer knew a worker he could depend on when he met Stocks. He sat him down for five minutes, showed him the ropes and then said,  “I don’t need to be here,” Stocks recalls. 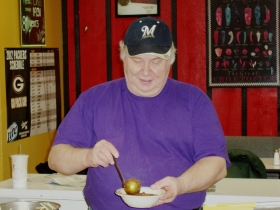 While the technical title for what he does is food service, Stocks thinks of it as people service. He’s proud of the regular customers for whom he dishes up their usual orders (this writer is a hot, spaghetti only, with cheese), while the customers dish to him about their lives.  Stocks can run through a list of celebrities he’s served, including Ben Sheets, Ray Allen, John Steinmiller, Brian Setzer from “Stray Cats,” Willie Davis, Tom Bosley, Bob Reitman, Ted Perry and Loretta Lynn: “She had a couple of chili dogs.” Longtime Milwaukee Buck Michael Redd sent his private chef down to taste the chili, apparently, with the hope the chef could duplicate it. No word on that score.

Stocks also recounts the many families, especially former Marquette University students, now in their second, or even third generation as regular customers of Real Chili.  He’s served chili to wedding parties.  About three years ago, a bridesmaid came in and asked Stocks what size he wore.  He laughingly replied he was a 13.  Without hesitation, the bridesmaid took off her dress, handed it to Stocks, along with a bottle of champagne, and walked out the door, clad only in her undergarments.

Both Real Chili sites are pretty basic, primarily stool seating, with big, clear glass windows in front that often are cloudy with steam.  Pictures of regular customers fill up the bulletin board at the East Town location, alongside bumper stickers and T-shirts, posters of sports teams and a colorful round-up of chili peppers.  The lighting is anything but subdued, all the better to ensure you don’t wear your chili home on your shirt.

Real Chili’s website proclaims it has been “Preventing Milwaukee’s Hangovers Since 1931,” and on occasion Stocks has to deal with drunks. “Once, I had to cut off a drunk,” Stocks recalls.  “He was falling off his stool.  I told him, ‘Come over here, sit down, I’ll give you some chili’.”  And it worked.  Then there are the customers who insist Stocks give them the chili recipe.  “Are you kidding?” he says. “If you get the recipe, you won’t come and see me anymore.”  As for customers who ask for the veggie menu, all Stocks can offer is a veggie taco, or a simple bowl of spaghetti and beans.

As his knees began to cause him mobility problems in the last few years, Stocks tried dealing with it by dividing the two-sided counter with co-workers.  But that proved not-so- successful: Stocks notes his ample girth and the tight passageway between the counter and steam table.  So Stocks will let his younger colleagues handle the counter on the busiest weekend nights, if there’s sufficient staff, and he’ll wash dishes or do other tasks.  And, he’s shortened his shifts a bit. 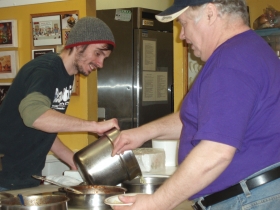 “Spanky” and James Stocks work together at the steam table. Photo by Peggy Schulz.

Stocks is considering a move to part-time status, but is in no hurry.  As one of his co-workers, whom Stocks calls “Spanky,” tells it, “He’s [Stocks] what brings people in the door.”    The relationship Stocks has with his boss also keeps him staying on.  Stocks recounts his pleasant surprise the first time he had a $500 night.  There was a bonus from Helfer on his next paycheck.

Stocks leads a simple life outside of work.  He has a fondness for the music of the 60s and 70s, especially Diana Ross and the Supremes.  He’s a humble man, recounting the “Legends of Chili” who worked with him briefly at the Marquette location before retiring, like “Blondie,” who retired at the tender age of 77, and Judy.  But as his co-workers and regular customers likely would agree, the true, enduring “Legend of Chili” is James Stocks.