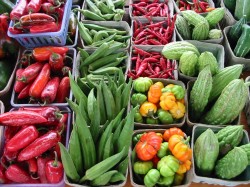 “Are the farmers at your market organic?” People ask me this at least once a week. As I wrote in a previous column, the answer is long and complicated, and I feel like I’m in a race against an invisible attention span timer. Nowadays I ask, “Do you want the long answer or the short answer?”

Here is the long answer:  Yes and no.

Yes in the spirit of the first organic rules as they were written in the 1970s. Emphasize quality over quantity. Don’t treat the soil as if it’s a chemistry equation that says if you put in X parts of nitrogen you will get Y bushels of eggplants, but regard the soil as an extension of the plant. Think long term by putting in more nutrients than you take out. Don’t ride above your crops in a $250,000 tractor with an air conditioned glass cab and GPS. Instead walk the fields every day and examine your plants with your hands and learn to listen to them. Don’t spray pesticides when you think you’ll have pest problems. Spray only when you know you’ve got bugs.

No in the sense that the original organic rules have been revised over the years to suit the needs and wants of corporate mega-farms that know there’s big money to be made on organic produce.

No in the sense that modern organic rules have paperwork requirements beyond the capabilities of most small farmers, who would rather keep their produce affordable by not hiring an office manager.

No because small farmers tend to be fiercely independent and proud people who resent having to file paperwork with governmental entities to get a seal of approval. They already know their produce is good.

Yes in the sense that a farmers market tomato is more like the tomato that our great-grandparents ate, before the introduction of truly nasty pesticides like DDT.

Yes because mega-farm organic tomatoes are still bred to survive a 1,500 mile journey on a truck. Drop them on the floor and they bounce. Farmers market tomatoes are picked by headlight the night before. Drop them and they go “splat.”

Yes because that farmer who smiles when she sees you every Saturday cares more about you and your health than any organic farm corporation ever will.

At this point, if the attention span timer hasn’t gone “DING!” I continue. Many people think that organic vegetables are grown without pesticides. But the truth is that every farm has bug problems, and all organic farmers spray their crops with approved organic insecticides. A 2011 USDA study of organic lettuce found nearly 20% tested positive for organic pesticide residue. Spinosad, for example, is on the list of USDA-approved sprays. It is a derivative of the soil bacterium Saccharopolyspora spinosa, a rare species discovered on a Caribbean island in 1982. It is manufactured by Dow Chemical under their brand name, Entrust, and it attacks the nervous systems of both harmful insects (aphids) and friendly ones (bees). Drink the stuff and you will have to go to the emergency room.

The short answer? Our farmers are “near-ganic” – as close to organic as they can possibly be.

Wisconsin was prominent in a recent column at Mental Floss called “19 Regional Words All Americans Should Adopt Immediately.” Number Four on the list was the wapatuli, “a homemade alcoholic drink with any combination of hard liquors or other beverages—Mountain Dew, white wine and vodka, anyone? A wapatuli can also refer to the occasion at which that jungle juice is consumed.”

I’ve never heard of this before. Does anyone have a recipe to share?