Food Desert or Not? 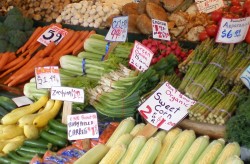 A lawyer friend of mine and I have a running joke.  Whenever I ask him a seemingly simple yes-or-no legal question, he pauses. Then he sighs and says, “Well … it’s complicated.” And so it goes for me when people ask me questions about getting more healthy food into North Side Milwaukee. It’s complicated.

It came up again recently when some friends asked me if I’d seen the New York Times article about two new studies that have failed to establish a connection between obesity and a lack of full service grocery stores in poor neighborhoods – a linkage that many of my colleagues and I have accepted as fact.

To be fair to these researchers, they have a difficult task. They want to conduct their studies on a grand scale so the conclusions are applicable across the United States. But the sheer scale of their work makes it impossible to sit down and talk to the people most affected by healthy food scarcity. What gets lost are the local stories.

It’s like trying to measure outdoor exercise opportunities for children by counting playgrounds from a helicopter. Yes, you can fly over Milwaukee and count the total, but unless you visit each playground you won’t know if the swings are working or if wood chips are in place so kids don’t hurt themselves. An urban planning colleague of mine calls this “ground truthing.”

To get an accurate picture of what’s going on, you need to visit residents and ask if their kids actually use the playground. It could be the playground isn’t used because it’s surrounded by trees that prevent a dad from watching his children from the front porch, or because there are no safe crosswalks leading to the park, or because children have found used condoms and hypodermic needles. Most researchers don’t have the funding for this level of detail, so they extrapolate their conclusions from huge impersonal databases from the Census Bureau or the state Department of Motor Vehicles.  And it ends up like trying to paint a 4-inch canvas with a 4-inch brush.

If these researchers were to visit the hundreds of convenience stores that serve as the main food source for whole swaths of Milwaukee, they would find some fresh produce. But they’d find those fruits and vegetables to be more expensive than at a suburban grocer and probably a few days away from becoming compost. If they talked to the corner store operators, they’d learn it’s impossible to run a mom-and-pop store and compete with Walmart because no wholesaler wants to sell produce to them anymore. They’d learn that convenience stores owners that want to stock vegetables have to drive to Sam’s Club, pay full retail and try to resell the stuff. And of course they have to mark it up.

If these researchers were to talk to corner store operators, they would discover  many don’t have the space or electrical wiring to run refrigerated produce display cases, and their landlords don’t want to make these kinds of upgrades because they don’t want to pay higher taxes.

It’s complicated. But the good news is that the needle is moving in Milwaukee because hundreds of people in our city are working at the healthy food access issue from a mind boggling array of angles. We have urban gardening proponents, entrepreneurs, indoor fish growers, community organizers, and urban planners that are putting their own personal spin on the issue. They’re having conversations and developing real relationships with residents, farmers, gardeners, and corner store owners. All of their solutions are hyper-local. Milwaukee’s food system will eventually look like a quilt made of little fabric squares that reflect neighborhood histories and cultures and aspirations. A North Side solution will look different than a remedy on the South Side. What many national-scale researchers want is one big homogenous blanket woven from the same thread. They’re looking for the forest and missing all the trees.

It’s complicated, yes, but Milwaukee has its advantages. It’s a small city. It’s easier to get to know people and to develop the kinds of relationships that lift projects off the ground in Milwaukee than Los Angeles, Chicago, or New York. We are also quite naïve. We’re not too cynical to try something that the experts call crazy. When it comes to healthy food access, Milwaukee is like a miniature Silicon Valley. Just as Apple started in a garage, tomorrow’s Will Allen is probably sitting with her laptop in an Alterra Café, plotting, blogging, and dreaming. I can’t think of a more exciting place to be.

Back when I was in college, I remember watching in horror one day as a classmate made himself a banana and mayonnaise sandwich. An informal poll on my Facebook page revealed a lot of high school classmates from North Carolina that grew up eating them. Thanks to the internet I’ve learned that this was another make-do dish that emerged out of the Great Depression. Last month I finally made one for myself and it wasn’t bad. Diet be damned, I actually ate the whole thing. The key to this recipe is Wonderbread. Put some South in your mouth and try it.

Which brings me to my question for readers: have you encountered any banana and mayo sandwiches in Wisconsin? If so, share your stories in our comments section.

16 thoughts on “Urban Foodie: Food Desert or Not?”