Last Days for the Sydney Hih 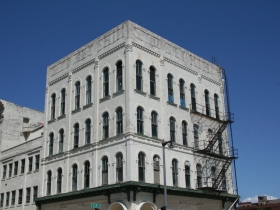 At the hearing Ald. Bob Bauman attempted to set parameters for an appeal when he questioned, “what is the standard of review?” Assistant City Attorney Mary Schanning argued that the committee is to balance the interest of the public versus the interest of the property owner, which includes the cost to the property owner for renovation. Ald. Bauman responded, “that’s not what the ordinance says.”  Following up Schanning explained that, “it is up to the committee to make that determination… I don’t think the ordinance really restricts what you can look at.”

Bauman then asked if Art Dahlberg, Commissioner of the Department of Neighborhood Services, was, “willing to say on the record that all four of these buildings are in eminent danger of collapse?” In a long form answer Dahlberg, explained during the standard raze process the department will “evaluate the cost of repairs to make the building occupiable,” and compare it to the assessed value of the building to determine if a raze order is justified.  Without directly answering Ald. Bauman, Dahlberg also explained the emergency raze process, and indicated the Sydney Hih would meet the criteria, but that the city very seldom uses an emergency raze condition to allow for remediation to take place prior to demolition.

Attorney Brian Randall, representing MEDC, argued that “the preservation ordinance itself prevents the designation of the Nicholas Senn Building,” and attempted to make the case that “the balance significantly weighs in favor” of overturning the designation.

“I want to assure you that I have a sensitivity to historic preservation,” said Rocky Marcoux, Commissioner of the Department of City Development, but added that “the roof is in danger of collapse, on the Senn Building,” and that “they’re not practical to preserve.” Marcoux went on to argue that for new development west of the river in the Park East to occur the city needed to remove the Sydney Hih complex.

Firing back Ald. Bauman made the argument that “by keeping at least the corner building you at least preserve options,” otherwise the city will end up with a parking lot.

A few developers and real estate professionals argued for the Sydney Hih’s removal. Gary Grunau, President Grucon Group, made the case that “the site is not a clean site, and Mike Mervis, Vice President of Zilber Ltd., argued that “this is a tough call, but maybe not that tough.”

The developer of the adjacent The Moderne, Rick Barrett, owner of Barrett Visionary, explained that “I normally side on the side of historical,” but in this case thinks the Sydney Hih should be demolished for redevelopment.

But not all of the developers in Milwaukee thought it was a lost cause.  Speaking in support of saving the Sydney Hih were two local developers, both capable of taking on the project given enough time.

John Raettig, Raettig Redevelopment, who has redeveloped historic buildings on Milwaukee St., the Johnson’s Bank building, and the Cawker Building stated, “I believe all of the buildings I’ve been involved with in my career would have qualified for a raze order by the standards I’m hearing.”  Explaining what he felt the impact of demolition has been and would be in this case he stated, “each time we lose one we lose an opportunity.” Raettig noted, as Ald. Bauman pointed out earlier, didn’t “see any reason to create any more of a parking lot, or gravel pit.”

Juli Kaufmann, president of Fix Development, “I share that point of view [with Raettig]…I believe small can be beautiful.” She added, almost as a critique of the City of Milwaukee’s efforts to demolish the Sydney Hih, “it’s just a matter of what you choose to value.”

A group of citizens also spoke in favor of saving the Sydney Hih, and passionately argued for the value of our history.

Despite the claim that new development would be hindered by leaving the Sydney Hih, Erik Ljung, who was one of the citizens that filed the designation petition and recent Urban Milwaukee photographic contributor, pointed out that the Aloft, and The Moderne “were not hindered” by the presence of the Sydney Hih.

Max Eisenberg, Sydney Eisenberg‘s grandson, spoke to the historic and cultural value of the Sydney Hih adding that it is,  “literally part of the heart and sole of what makes Milwaukee, Milwaukee.”

“People fall in love with the beauty of our city,” said Chad Johnson, and that “once it is gone, it is gone.”

Ald. Witkowski objected to Bauman’s motion to deny the appeal saying, “if there was some savior” for the building that they would have already come forward. The motion to grant the appeal was approved on a four  to one vote, with Bauman voting in opposition. The full Common Council will pick this up again on July 6th.

5 thoughts on “Last Days for the Sydney Hih”