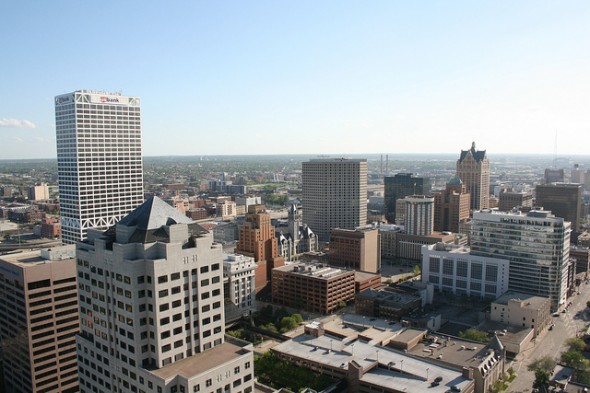 At his annual end of the season press conference, team owner Herb Kohl announced his commitment to helping finance a new arena for the Milwaukee Bucks. Kohl got a lot of attention for committing to help finance a new arena, but avoided getting into details. It’s important to note that even though new stadiums are often built with substantial public investment, the teams themselves often contribute to the facility. This is no more clear than in Minnesota, where the Minnesota Vikings’ team share is one of the hot button issues for their new facility.

While Kohl said his commitment would be “not insignificant,” it’s unreasonable to hold our breath assuming he’ll pay for the majority of a new facility himself. Milwaukee got lucky once with Jane and Lloyd Pettit paying for the entire Bradley Center (with the hope of landing an NHL team – which is part of the reason the facility has so quickly become outdated), but it’s pretty clear that won’t happen again.

For a point of reference on current arena costs, the newest arena in the NBA, the Amway Center in Orlando, cost $480 million. I would guess a new facility in Milwaukee would cost less than that, but it’s not going to come in under $100 million like the Bradley Center did.

All in all, the most significant thing Herb Kohl did is start the public push for a new arena. We should expect whomever owns the Bucks to contribute to the costs of a new arena. That said, Kohl’s move of publicly announcing his commitment was certainly a shrewd public relations move.

We will certainly discuss this topic at length in the future. We’ve even in the past discussed tearing down the Bradley Center for a new facility.

Silk owner Jon Ferraro is back with another license application for a strip club on Old World Third Street. He is applying at the same location he previously applied at, 730 N. Old World Third St., Of note, Jon Ferraro’s lawsuit against the city regarding his previous application for a strip club in this space (in 2010) is still pending. I assume the two are related, and I’m pretty sure we will find out soon how.

It’s important to note that if granted, Silk East would be the second strip club downtown. Art’s Performing Center is located at 144 E. Juneau Ave. Although only garnering 1 and a half stars on Yelp, Art’s clearly hasn’t damaged the image of downtown, and there isn’t any reason to believe Silk East would either. Aspiring to be like downtown Minneapolis and its numerous strip clubs on the other hand, that’s a bad idea.

The Quiet Company has succeeded in keeping their development of a new facility to house hundreds of employees quiet. As a reminder, Northwestern Mutual announced in September of 2011 that they would demolish the 16-story brown office building located on the southeast corner of Mason and Cass streets because of looming long-term maintenance costs. In December it was announced they would buy the building located at 733 N. Van Buren Street from Joel Lee‘s Van Buren Building Co, with the intent to close on the purchase in 2012 and move employees in 2013. The newly acquired building, formerly home of Cramer-Krasselt, was assessed at $4,502,000 in 2011.

Will the company stay and keep this batch of employees downtown? That remains to be seen, as the firm indicated they’re looking at their options for a new building downtown (where it currently has employees 3,000) or relocating the employees to the Franklin campus (2,000 existing employees). With the failure of Mayor Barrett to fit a square peg into a round hole by getting Kohl’s to move to the Park East, expect the city to throw everything they can at Northwestern Mutual to make sure their new building is downtown.

If the City fails to land the new building it will be quite ironic to see the Downtown Transit Center redeveloped while Northwestern Mutual replaces their 500,000 square foot building with a parking lot or empty park.

Jeff Sherman notes the new “facade” given to the covered buildings on the 600 block of N. Broadway, just south of Wisconsin Ave. The buildings were formerly covered by an ugly wood facade, but it’s now painted to resemble resemble a building. While the new “facade” is a significant improvement, it’s a shame it took years to come together, and a real tenant would certainly be far more desired.

As far as facade upgrades in the area go, the pair of buildings around the corner on Wisconsin Ave take the cake for an improvement (all part of the same parcel as the hidden the Broadway buildings). Ultimately though, all are a hollow effort until actual tenants move in.

The Milwaukee County Transportation, Public Works, and Transit Committee unanimously authorized the Director of the Department of Transportation to declare surplus and offer for sale the Downtown Transit Center today. This move keeps the redevelopment of the Downtown Transit Center on track. The authorization will now go before the full Milwaukee County Board of Supervisors. Of note, the proceeds from the sale of the land will need to go for capital projects for transit in Milwaukee County, not for operating funds.

Cafe Centraal is expanding east. The Lowlands Group restaurant will occupy the space immediately to its east on E. Lincoln Ave that formerly housed an acupuncture and massage therapy business.

City.Net Cafe is coming soon to E. Wisconsin Avenue just east of Broadway. The original City.Net Cafe is open at 7211 W. Burgleigh Street. The website for the existing cafe is CityNetJazz.com, not City.Net. The cafe is owned by Sam Belton.

The Dogg House on Jefferson Street will be short-lived, at least for now. At the first regular meeting of the Licenses Committee during the current Milwaukee Common Council session, owner Mazen Muna was informed that he has likely been operating illegally (despite his understanding that the Health Dept had cleared his operation). Muna currently operates four other locations within the City of Milwaukee. This only goes to show how the City’s licensing process is at times quite confusing and ripe for overhaul. As of lunch today, the restaurant is still open presumably using some form of double jeopardy defense.

Greek Village Gyros intends to open at 1888 N. Humboldt Ave. the location was formerly home to Meglio Pizzeria. The registered agent on the liquor license application is George Dimitropoulos.

Rumor Lounge, an upscale lounge, has had their liquor license approved at Monday’s Licenses Committee meeting. The lounge will open at the corner of Pittsburgh Avenue and 1st Street in Vetter Denk’s headquarters (161 South 1st Street).

The Twisted Fisherman Crab Shack also had their liquor license approved at Monday’s Licenses Committee meeting. The Crab Shack is the latest venture from Russ Davis and will open in a converted warehouse in the Menomonee Valley. Davis also has operated Rio West Cantina, Lakefront Brewery Palm Garden, Riverwalk Boat Tours and the Hubbard Park Lodge. He formerly operated Cafe Vecchio and later The Red Accordian in the space currently occupied by The Loaded Slate.