Tear It Down – US Cellular Arena vs Bradley Center

Fast forward a few years and assume that the Bucks were able to land a new arena in Milwaukee. Let’s assume that arena was built in the Park East lot north of the Bradley Center (what today is a large piece of gravel where a freeway once stood), and that the tenant list includes the Milwaukee Bucks, Marquette men’s basketball team, huge concerts, and Milwaukee Admirals. Milwaukee enters into a unique situation of having three arenas in a row. Being that Milwaukee doesn’t have the need for three facilities in excess of 10,000+ seats in the region, let alone next to one another, which do you get rid of?

The arenas as they would be aligned in the assumed future world.

The US Cellular Arena, previously known as the MECCA, would be the oldest of the three arenas. Seating a max of 12,700 people, the arena is also the smallest of the three. It’s smaller size allows it to host mid-sized events with ease though, including tenants such as the UW-Milwaukee men’s basketball team and Milwaukee Wave. Compared to the Bradley Center it is severely lacking in amenities, with the concourse definitely showing the building’s age with bathrooms off the main-level and limited concession areas. The arena also lacks luxury boxes or any sort of club. It lacks an attached parking garage, but is adjacent to many. It posses a smaller footprint than the Bradley Center, is located directly to the east of the Milwaukee Theatre, and is across the street from what in our future world is known as the Frontier Airlines Center. Along with the Midwest/Frontier Airlines Center and Milwaukee Theatre it is operated by the Wisconsin Center District.

A recently floated idea of an on-campus arena for UWM would lower the utilization of the US Cellular Arena dramatically, but the leave of absence that UWM placed Athletic Director George Koonce on shortly after the idea was announced seems to indicate that egg isn’t about to hatch. It’s also possible that, with or without UWM calling “The Cell” home, the Milwaukee Admirals still might find their way back to the stadium they once called home, as might the Arena Football League’s Milwaukee Iron.

Even with a new arena in the neighborhood, the US Cellular Arena seems poised for business as usual, if not growth.

The Bradley Center, a gift to the state from Jane Petitt in memory of her father Harry Lynde Bradley, it seats a maximum of 18,600 people for basketball. With sight lines built for hockey (the Petitt’s tried to land an NHL team in Milwaukee), the stadium may still be an ideal home for the Milwaukee Admirals even after a new stadium is built. The Admirals, however, rarely require use of the upper seating bowl, similar to the arena football team, the Milwaukee Iron. Keeping a stadium to use half its capacity seems extremely unlikely. It seems most likely that the Admirals would be forced to move into either the new stadium or their previously mentioned old home. The Bradley Center, despite drawing over 2 million attendees to over 150 events a year, would likely see the least use in a future with a new arena.

Is it possible that only the Bucks would move to a new arena and everyone else would stay at “the Fortress on Fourth”? It’s possible, but it’s unlikely. The hockey sight lines and lacking amenities (stadium restaurant(s), more clubs) make the Bradley Center unattractive to Marquette as well when a new venue is available. Presumably entertainers will play where they can make the most money, and it seems that a new arena should be able to out-earn an old arena for a host of reasons including acoustic quality and amenities.

Could the Bradley Center land a new tenant if a new arena opens? UWM seems unlikely to move their basketball program to a bigger arena, as they don’t routinely push the capacity of the US Cellular Arena. The same goes for the Milwaukee Wave.

Would an NHL team move to Milwaukee to become the primary tenant at the Bradley Center? That seems extremely unlikely, despite the fact that there are multiple teams in the NHL either in dire financial straits or actively looking to move (Phoenix Coyotes being first on the list). The biggest deterrent is that multiple studies have now shown Milwaukee to be overextended when it comes to supporting professional sports, the most recent coming from Bizjournals. The second biggest deterrent will be the fact that a team is unlikely to move to a market where there is a 25+ year old stadium with known revenue-generating deficiencies. Even if the Bucks were to leave Milwaukee, it’s hard to see a NHL team coming.

The Bradley Center does have some positives going for it. The state of Wisconsin, the stadium’s owner, recently committed to a two-year capital project to modernize the arena with $5 million in funding that will go towards a $23 million renovation. The project will ultimately include replacing seat cushions (the same ones are in place since the building opened), upgrading the HVAC system, replacing the ice rink system, roof repairs, and other improvements. The most visible improvement from the project might be the new scoreboard that will be put in place next year, replacing the horribly out-dated one the arena currently has. The new scoreboard is something that would likely be moved to a new arena when one is ultimately built. it’s unclear how many of the renovations will actually happen before planning for a new stadium becomes a big issue. 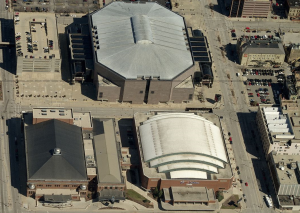 Supposing either building was to be demolished, what could be gained from the land they occupy?

The Bradley Center has a much bigger footprint than the US Cellular Arena, and therefore provides a much greater opportunity (although the Park East project has shown having lots of available land might not be the best short-term blessing). A large infill project could be undertaken to develop an urban, mixed-use neighborhood between the two arenas, similar in scale to what the Mandel Group is doing with The North End or what happened at Bayshore Town Center. A single-use retail project could also happen with shops, restaurants, and bars built on the former Bradley Center land, this seems far less desirable from an urban planning standpoint of trying to make a more active downtown. Or the land could go the way most of County Stadium did and simply become surface parking, but that seems extremely undesirable.

The US Cellular Arena land could be redeveloped, although the scale of the redevelopment is much smaller. The smaller scale could mean the land is redeveloped faster (much as the City’s, as opposed to the County’s, parcels were in the Park East). First-floor commercial space is a given in that location, but what goes above it is far from certain. It’s unlikely top-tier Class A office space will go on that site, nor would it make sense to put simply a parking garage in (unless another major redevelopment like the Journal Sentinel parking lot and buildings happened). Given the constraints of the site, it seems more likely that a few moderate sized apartment buildings would go in with the commercial spaces.

When all is said and done and a new arena is in place, it appears to make the most sense to demolish and redevelop the Bradley Center. If left standing, the arena would become a black hole downtown, with quite possibly zero tenants. The arena, despite being 35+ years newer than the US Cellular Arena, is near or at the end of its economically viable life. It was built to serve an NHL team that never came, and lacks the quality seating and amenities that its peers like the Conseco Fieldhouse, Target Center, and United Center possess. Even with renovations it will be a dated arena. The 60-year-old US Cellular Arena on the other hand continues to be a viable home for an indoor soccer team and mid-major college basketball team, even if a new arena were to be built. Small improvements could go a long way to keeping the US Cellular Arena economically viable for medium-sized tenants for the foreseeable future.

Bring on the Rockwell Automation Arena.