After the 88Nine Mardi Gras party at Turner Hall on Tuesday, I wonder how many will wear the mark of ash Wednesday in the morning? After all, everyone’s Irish on St. Patrick’s Day, but how many are Catholic only one night a year?

The scene was set with carnival colored lights in deep purple and green, the stage littered with instruments. The dance floor seemed lonely and desolate at first, save for the few brave souls venturing out for a spin or two before creeping away from the prying eyes of the crowd. Turner Hall’s Mardi Gras celebration was filled with people more middle-aged than might normally be seen at the venue, and the Radio Milwaukee crew was out in full force.

Smells of alcohol, perfume, and food hung heavy in the air. Beads, masks and feathers adorned well-dressed patrons circling about Maxie’s Southern Comfort catered fare. Vegetarian and traditional jambalaya, muffaleta, and crawfish Étouffée were splayed across the serving table next to Milwaukee’s largest king cake as we waited for the Fat Tuesday celebration to begin.

Madison-based Mama Digdown’s Brass Band filled the stage with two trumpets, two trombones, a sax, tuba, and two drummers on snare and bass, big-band style. With a mighty burst of the first few chords of Mardi Gras favorite tune, “Iko Iko/Jock-a-mo” (complete with audience participation), the band let the good times roll. In line with the New Orleans-inspired experience, the band played loud, fast, and with integrity, worthy of a later slot when booze and the desire to dance set in.

Eventually the swing-loving crowd moved across the great divide between the performers and the seated audience, kicking and spinning to the beat accompanied by the ever-present sound of rattling plastic beads. Hangers-back slowly pulled forward and the floor began to shake. Mama Digdown laid down danceable tunes, including a riveting interpretation of Michael Jackson’s “Black or White.” Rumor has it, the band is working on a twelve-song tribute disc called Brass Jackson. Given their display of talent, I’d wager it’s going to be worth listening to.

Mid-set, Paul Cebar joined the group for a jazzy number, raising the energy level of the audience to higher heights. He clowned around onstage with a green Mardi Gras mask and a little footwork to sweeten up his signature voice.

As more people began to dance, a heat wave swelled on the main floor. Heading up to the balcony VIP section, I cooled off and watched two dancers spin their LED hula hoops into cosmic trails. In between sets, Maxie’s cut and served their king cake, and the audience clamored in hopes of finding the lucky plastic baby symbolizing good fortune in the coming year. Dripping with purple, green, and white icing, the cake was surprisingly moist, and in spite of its massive size, it had a rich spicy sweetness that left us licking forks and fingers after each mouthful.

Shortly after, Paul Cebar Tomorrow Sound sound took the stage. Their mix of driving guitar, conga percussion, and funk was surprisingly approachable for even the rhythmically challenged in the audience. The band’s Big Easy sound reminded me of all the times I’d seen Paul out and about, first as a regular patron at the Oriental Theatre, on the air for WMSE, or supporting other musicians for gigs around town. Something about him oozes cool, and that laid-back, sunny demeanor is infectious on even the coldest February night.

Listening to the Tomorrow Sound assured me Cebar’s coolness is no act. I fell for the style hook, line and sinker. In the pockets of merriment, lovers gazed longingly, and patrons young and old clapped, shouted and stomped along with the tunes they’ve come to know and love. Cebar’s cajun-inspired, blue-eyed soul interpretation of life in the Big Easy was not only enjoyable, but completely believable. Throughout the night, the group continued to prove again and again why their name is synonymous with the homegrown sound of Milwaukee music, the street festivals and summer sessions that spread feel-good vibes through our thawing winter bones. 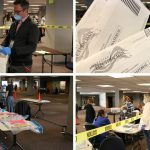