30 Paintings in 30 Days before Gallery Night 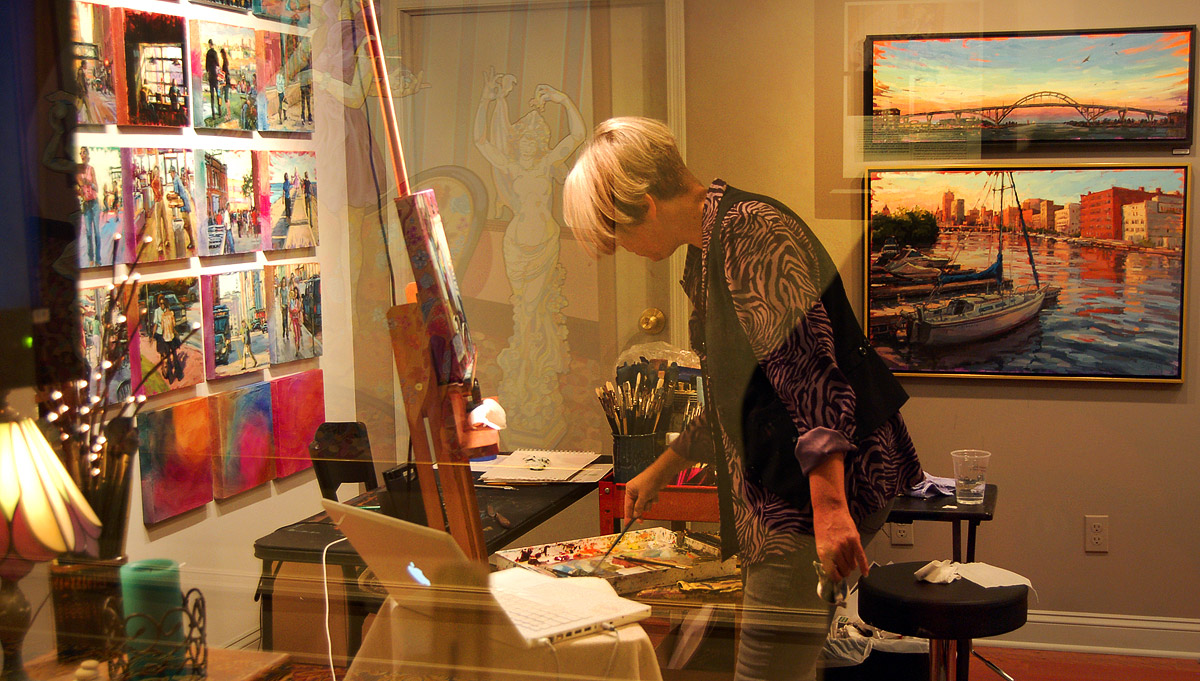 As you can see, painter and performance artist Shelby Keefe has gotten used to the reality-show like fishbowl that exists for the Pfister Hotel‘s artist-in-residence. Passersby can 0bserve Impressionist oil painter studious at work, crafting recognizable urban landscapes.

It is by great coincidence then, that she is looking at observed people in natural poses and environments as inspiration for her latest series, 30 Paintings in 30 Days, which will be premiered at the Oct. 21 Gallery Night and Day in Milwaukee before being shipped up to Door County.

It is there that the challenge began. Students at the the Peninsula School of Art in Fish Creek dared her to take up an art practice commonly seen on Internet blogs and credited to artist Duane Keiser for painting an original piece each day. Keefe began sploshing her trademark colored backgrounds onto small squares of canvas in mid-September, and began choosing images from a variety of sources ranging from her own photos, photos from east coast photographer Richard Dorbin, as well as from public submission of images via the Pfister’s on-going blog which includes the hotel narrator-in-residence.

Keefe stands on a graying Oriental rug, listening to reggae or light electronica (some of which are her own compositions) on a shuffled mp3 player, and looking back and forth from a computer monitor with an image and back at her palette.

“It took a year to gestate, mostly to establish the parameters, but I really wanted to work on figures in the urban landscape,” Keefe says.

She is most well known for her vivid, emotional renderings of coffeeshops on street corners, old storefronts in long rows, the Hoan Bridge at sunrise, and even salt trucks at Jones Island. She specializes in color and cityscapes, which are still a part of the new series, but no longer the focus in these more intimate expressions.

“They’re not portraits or personal statements about individuals,” she said. “I like the idea of seeing people when they are not paying attention [to the photographer/observer] but are involved in some kind of story. I just feel it’s a more captivating way to show people.”

While people involved in a storyline is apparent, there are some recognizable neighborhoods or minor landmarks to those familiar with Milwaukee. Are those people enjoying coffee at Alterra? Is that man crossing Water Street? Is the happy family walking a breakwater path along Lake Michigan? Perhaps.

Shelby Keefe has many interesting podcasts, videos, and online previews of each piece courtesy the Pfister blog and her own website. On Gallery Night, the artist will not only premiere this work in her hotel studio, but at 10 p.m. conduct a “performance piece” by painting a piece in 20 minutes while her original music plays. For more information on Gallery Night, see TCD’s guide.

0 thoughts on “Shelby Keefe: 30 Paintings in 30 Days before Gallery Night”