Does building a park over a freeway in Milwaukee make sense?

Cities across the country are in the process of constructing or exploring ways to turn freeways into public space. The most notable example of this freeway-to-park transition is Boston’s Big Dig project, which turned the elevated Central Artery freeway (Interstate 93) into a 3.5-mile tunnel and replaced it with the Rose Kennedy Greenway. The Boston project was incredibly expensive, but it’s hard to imagine downtown Boston and The North End with a freeway dividing them today. Turning freeways into parks appears to be a wise solution when a city’s central business district (many of which are encircled in freeways) run out of land that can be easily developed or when the freeway serves as a barrier between two successful urban neighborhoods. Would it be wise to implement such an idea in Milwaukee? 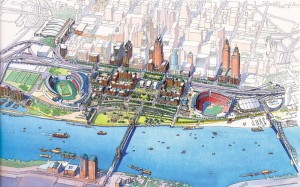 For cost reasons, it’s most efficient to cover a trenched freeway rather than to replace an elevated freeway with a tunnel (as Boston did). In Dallas construction of a five-acre park over a trenched freeway (Woodall Rodgers Freeway) will connect downtown Dallas with the thriving Uptown neighborhood. The connection will be further enhanced with the expansion of the M-Line Streetcar through the park.

In 1976 Seattle completed Freeway Park, a 5.2 acre park that covered part of their newly completed freeway. The park has recently been reinvented following a 2002 murder and a number of other crimes. The park is adjacent to the city’s convention center in the heart of the city. Phoenix has a tunneled Interstate 10 and built a park on top (Margaret T. Hance Park).

A number of other cities have plans in place to cap freeways. Cincinnati has pilings in place to build a park over Fort Washington Way that would connect downtown with their redeveloping riverfront (UrbanCincy review of the proposal). The Los Angeles area has a number of plans in various states of completion to cap freeways everywhere from downtown to Hollywood. Oak Park, IL has studied capping the Eisenhower Expressway. St. Louis has a design competition underway to redevelop the grounds around the Gateway Arch, with a number of the designers recommending capping the freeway, and the City to River movement recommending replacing the freeway with a boulevard.

A Freeway Cap Park in Milwaukee 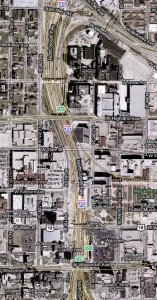 A cap over Interstate 43? It’s an idea that’s happening elsewhere in the country.

How could a freeway cap be utilized in Milwaukee? The most logical spot to build one is north of the Marquette Interchange over Interstate 43 connecting Westown and Avenues West. It could stretch as far north as the Winnebago Street bridge.

The benefits? A freeway cap park would finally make Marquette University feel like it’s part of downtown, instead of just outside of it. This might cause future Marquette student housing (be it built by the university or private interests) to be built in Westown. If the park cap was built far enough north, it’s possible that The Brewery redevelopment might cause a positive spillover effect onto the neighborhood west of it that’s currently underutilized. It also may encourage may infill development in the eastern portions of Avenues West as the park would eliminate the gorge that currently separates the neighborhood from downtown.

Taking the pessimistic viewpoint, a Interstate 43 freeway cap park might not produce much benefit for a number of reasons though. For one, they’re really expensive  to build (~$500 square-foot) so the city would need to recoup a lot of value from new development. Unfortunately, despite the park likely being an attractive space, there isn’t a whole lot of land for development in the area. The Milwaukee County Courthouse consumes much of the east side I-43 as it traverses downtown, drastically limiting the amount of higher value land for redevelopment. The land that isn’t the Courthouse east of the freeway is park land that is already underutilized that likely couldn’t be redeveloped because of it’s proximity to the courthouse.

On the west side of I-43 there is likewise a shortage of land for redevelopment. Aurora Sinai Medical Center occupies most of the land. The parcel north of the medical center that could be redeveloped is unfortunately located just across the potential park from the Milwaukee Secure Detention Facility (more commonly, “the jail”) handicapping it’s value.

Outside of the area where the capped park could be built, there is likely too much available land in downtown Milwaukee over the next 10 years to effectively return value on the park. The Park East Freeway removal has left a lot of land in county hands, which they’ve been unsuccessful in selling. The Milwaukee Intermodal Station has generated more demand in that area, along with the planned Milwaukee Streetcar and potential Post Office relocation, that’s a lot of land that is set to become available soon. The recently unveiled Downtown Plan also plans for more development near the lakefront and redeveloping MacArthur Square to include potential development sites.

There would be a large amount of value to be captured if the elevated Interstate 794 was to be removed or lowered east of the river, but the lack of political will to do anything other than redeck the Hoan Bridge appears to have doomed any discussion of that issue.

Cities like Dallas and Cincinnati seem poised to capture a lot of value with the cap parks, but they’re using them to connect two thriving neighborhoods. Avenues West, despite a highly laudable continued series of investments by Marquette is not as strong as Uptown in Dallas. Avenues West and Westown will be stronger in the future, and at that point there will be more value to capture with a park to bridge the gap, but until then it would be wise for the focus to be on infill development.

While there are benefits to building the freeway cap park, ultimately Milwaukee is best to invest elsewhere at this time. Building a freeway cap park will likely someday be a good idea, but it doesn’t seem economically feasible in the next 10 to 20 years. Investing and improving connection tools (the Streetcar, the Riverwalk) as well as generating more infill development in the areas outlined by the Downtown Plan appear to be the most promising way for the city to generate a solid return-on-investment with new development.

12 thoughts on “Does building a park over a freeway in Milwaukee make sense?”