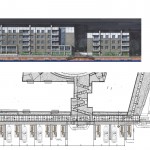 Drawing of the proposed riverwalk segment

The riverwalk segment for the proposed Beerline B Apartments will go before the Milwaukee City Plan Commission on August 23rd. General Capital Group is bringing the riverwalk segment forward for approval before the entire project. The 140-unit project, which recently was awarded $2,345,310 in WHEDA tax credits for 119 low-income units, will occupy the corner of Commerce St and Pleasant St. The site was one-time the location of the proposed Pleasant Street Market anchored around a grocery store, which appeared to halt after the anchor tenant signed a deal on the other side of the river.

The Beerline B Apartments riverwalk segment is the missing piece that will connect all of the Beerline B neighborhood with Schlitz Park and the rest of Westown, East Town, and the Historic Third Ward via the Milwaukee Riverwalk.