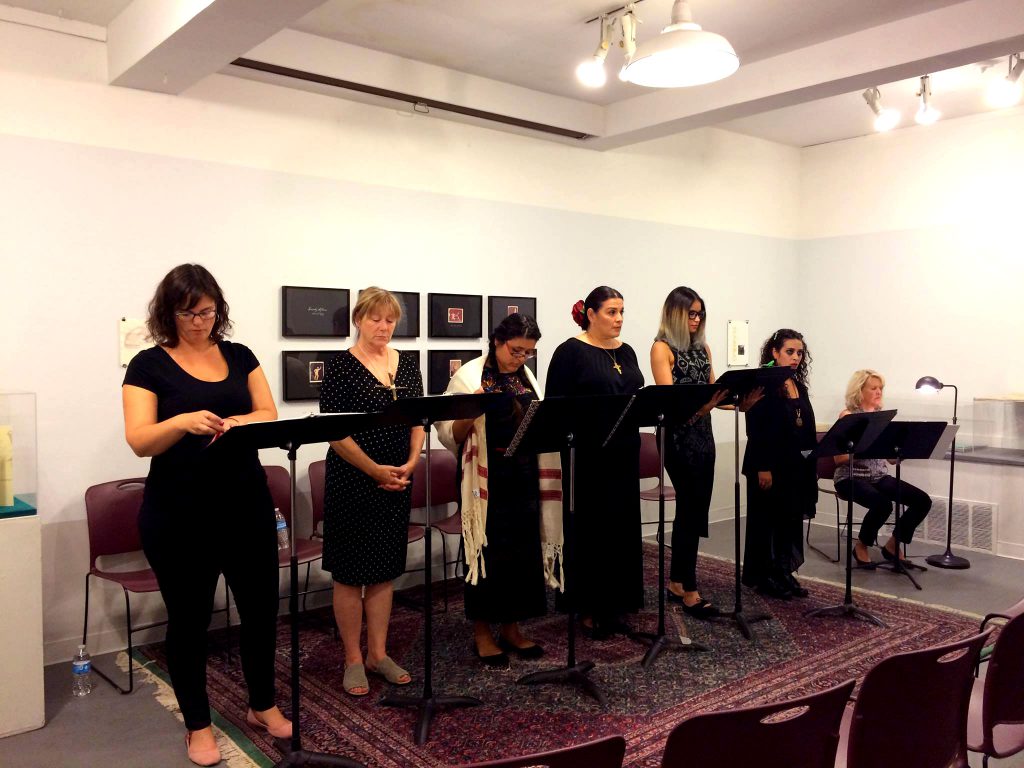 The cast of THE HALL OF FINAL RUIN prepare for a reading. Photo courtesy of Renaissance Theaterworks.

Milwaukee, Wis. – (August 12, 2019) – Renaissance Theaterworks (RTW), Milwaukee’s only professional theater company dedicated to promoting the work of women onstage and off, presents the Br!NK Award annually to Midwestern women playwrights to develop and advance their work. Br!NK continues to expand opportunities for women by fully staging a collection of 10-minute plays, the Br!NK Br!efs, in addition to developing two, full-length Resident Br!NK plays. ’RAIN ON FIRE by Karen Saari and STITCHED WITH A SICKLE AND A HAMMER by Inna Tsyrlin, have been selected from over 35 submissions to be presented as staged-readings during the Sixth Annual Br!NK New Play Festival, Saturday, September 7 and Sunday, September 8, 2019 at Milwaukee’s new creative arts hub, NŌ Studios (1st floor gallery stage – 1037 W. McKinley Avenue, Milwaukee, WI 53205).

The 2019 Br!NK playwrights spend a week workshopping their play with a director, cast and dramaturg – a team dedicated to researching and considering the play from every angle. The plays are then presented as staged-readings for the public over the Br!NK New Play Festival, touring to a variety of Greater Milwaukee area locations, September 3– 6, and at the new Creative Arts Hub, NŌ Studios for the Br!NK New Play Festival Weekend, September 7 – 8. Following each staged-reading, audience members learn more about the writing and workshopping processes from the playwrights involved and can ask questions during a structured talkback. Audiences are also encouraged to give constructive feedback of their experience to the playwright. BrINK is supported by Ralph Evinrude Foundation, Inc., Bader Philanthropies, Inc., City of Milwaukee Arts Board, The Brico Fund and Frieda and William Hunt Memorial Trust.

“Contemporary playwrights do not have many opportunities to introduce new work to audiences and statistically, women playwrights have even fewer. . . .  I have participated in many readings and performances of my plays in the past . . . I have never had a better experience than I did at Renaissance.” –Gwendolyn Rice, 2014 Br!NK Playwright

“. . . I know that my play is much closer to being production ready because of Br!nk.”  –Philana Omorotionmwan, 2016 Br!NK Playwright

Br!NK New Play Festival features the full-length staged-readings in addition to the Br!NK Br!efs 10-minute Plays. The Br!efs showcase the work of six new Midwestern women playwrights in never-before-seen 10-minute plays written under the prompts. The 2019 Br!NK Br!efs plays and playwrights are: TWO TRUTHS AND A LIE by Emily Elliott, THE ARRANGEMENT by Jennifer Dobby, A VERY DRAMATIC SCENE by Deanna Strasse, HOLIDAY CARDS by Nicole Amsler, GLASSSLIPPER by Molly Peterson and FOCUS by Lezlie Revelle Zucker.

A full schedule, listing of locations and details about the Br!NK plays and playwrights can be found at www.r-t-w.com. Photos available upon request.

Tickets for the Br!NK New Play Festival are available ONLINE ONLY at www.r-t-w.com or in person for day-of sales. Br!NK Tickets cannot be purchased over the phone or through the Broadway Theatre Center Box Office. Br!NK New Play Festival attendees will have the option to attend as many or as few events as they choose; Br!NK tickets are $16 per Br!NK event at NŌ Studios and can be purchased in a V!P All-Access Package for greater savings. Admission is free to NŌ Studios members. A suggested donation of $10 can be given upon arrival at toured reading locations – no online ticket necessary.

One (1) admission into one (1) of the full-length Br!NK staged-readings (’RAIN ON FIRE or STITCHED WITH A SICKLE AND A HAMMER) OR one (1) of the Br!NK Br!efs Performances.

One (1) admission into any and all full-length Br!NK staged-readings (’RAIN ON FIRE or STITCHED WITH A SICKLE AND A HAMMER), and both Br!NK Br!efs 10-minute play performances.

Karen Saari’s IN A CLEARING premiered at Magnetic Theatre Company (Asheville, NC) in 2018 following development via Last Frontier Theatre Conference and Wisconsin Wrights New Play Festival and was an O’Neill Conference semi-finalist. Her one-acts have been performed across the country. Her comedy, BAD IN BED (A FAIRY TALE), premiered with Acadiana Rep (Lafayette, LA) in 2018. She is a member of Dramatists Guild and Playwrights Center.

Marie, a failed musician, returns home to plan her pill addict mother Lorraine’s funeral. She discovers “Rain,” a closet poet, left a surprising final request for Marie to carry out with her cousin Caleb. Caleb is a meth user that cared for ’Rain in her final months. They must compose a song out of one of Lorraine’s poems to perform at her funeral in this sometimes funny, sometimes painful look at the opiate crisis in Michigan’s north woods.

Inna Tsyrlin (STITCHED WITH A SICKLE AND A HAMMER)

STITCHED WITH A SICKLE AND A HAMMER SYNOPSIS

Aleksandra, a university student arrested by the Soviets for reading an article from the West, is sent to a Gulag camp for seven years. To help survive her sentence, she joins the camp’s theatre troupe but when she learns that she’ll be performing for the American Vice-President Henry Wallace, she faces a life or death decision. Will she comply with the charade and pretend she is a free woman so she can survive the Gulag? Aleksandra realizes she has unintentionally signed up for a scheme to deceive Wallace, and the world, that she and other political prisoners across the Soviet Union do not exist. She prepares for two roles: the character on stage – Nina from Chekhov’s THE SEAGULL – and the role of an actor who isn’t imprisoned. The theatre troupe becomes Aleksandra’s family, she even falls for the director. While preparing for the performance she realizes that truth requires even greater sacrifice than her arrest. STITCHED WITH A SICKLE AND A HAMMER is centered around an actual event where Wallace visited the camp in May of 1944, but instead of seeing a hard labor camp, he saw a façade of a town.

This year’s “Br!efs” consist of six, 10-minute plays, written by Midwestern women playwrights. A sample platter of theater perfect for any theater enthusiast or newbie. All of these Br!efs were written based on three different prompts, each involving objects the playwrights needed to include in their play:

TWO TRUTHS AND A LIE by Emily Elliot

Thomas lives in a typical college apartment with Miranda and Jamie . . . who annoy him . . . A LOT. One night, Thomas comes home from a late night of studying to his two drunk roommates who rope him into a game of Two Truths and a Lie. This short play explores how a seemingly harmless party game can take a dark turn in the right company.

THE ARRANGEMENT by Jennifer Dobby

New Year’s Eve.  Recently divorced couple Eva and Mario wrestle with whether or not ‘should old acquaintance be forgot.’

Everyone’s got a story, and when there’s a writer around, everyone can’t wait to share it.

When the Dealer family gets together to play their annual round of cards at the holidays, we witness the real story behind the saccharine sweet holiday newsletters they send out.

GLASS SLIPPER deals with how people in our lives can directly affect our healing.

Robert has been trying to convince his wife that she should look into a recent medical advance – a chip that improves your focus – to help her be more productive. Celia, however, has strong reservations. Robert secretly gets the chip himself to prove its safety and efficacy, but just as Celia is about to be swayed, they learn how dangerous a shift in focus can be.

Friday, September 6 at 7:00 p.m. – Toured Reading of STITCHED WITH A SICKLE AND A HAMMER by Inna Tsyrlin at UW-Parkside (900 Wood Road, Kenosha, WI 53144 – The Rita Tallent Picken Regional Center for the Arts & Humanities) www.uwp.edu/therita/visit.cfm

Renaissance Theaterworks is Milwaukee’s only women-founded, women-run professional theater company. Dedicated to promoting the work of women onstage and off, Renaissance Theaterworks creates moving theater that connects with our shared sense of being human.Founded in 1993 by Suzan Fete, Marie Kohler, Raeleen McMillion, Jennifer Rupp and Michele Traband, RTW is the nation’s second oldest theater company with a mission to promote gender parity. RTW produces thought-provoking, intimate theater in the Studio Theatre at the Broadway Theatre Center, making a move to a new performance space at Next Act Theatre beginning in Fall 2020. www.r-t-w.com

Back in the News: Rush To Judgment on UWM Lecturer? by Bruce Murphy 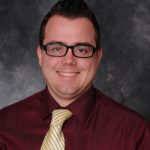