Sen. Olsen skipped a meeting at the King Veterans home to attend another very "important obligation" - judging a baking contest. 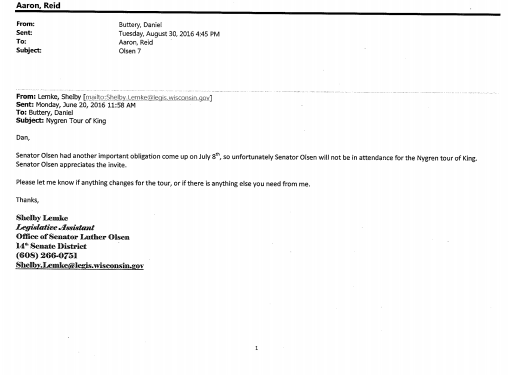 MADISON – An open records request made by the Democratic Party of Wisconsin to the Wisconsin Department of Veterans Affairs reveals that Sen. Luther Olsen skipped a tour of the troubled Veterans Home at King to be a “celebrity guest” at a baking contest.

According to records provided by the Wisconsin Department of Veterans Affairs, Sen. Olsen was originally scheduled to visit the Veterans Home at King on June 3rd of this year, but for unknown reasons the visit was rescheduled for July 8th. However, because Sen. Olsen had “another important obligation” spring up, he was unable to attend the July 8th meeting and tour.

According to a reporting by the Milwaukee Journal Sentinel’s Daniel Bice, Sen. Olsen told the paper that “It wasn’t what I was doing (at the fair), but whether I keep my word or not,” However, it’s clear Sen. Olsen has no interest in keeping his word to Wisconsin’s elderly veterans. 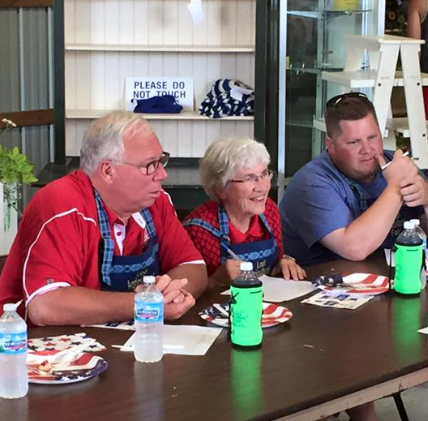 “Thank You to our Celebrity judges JoAnn ——-, Luther Olson [Olsen] and Bryant —— We sure hope you enjoyed your job today!!!” – Lodi Agricultural Fair Facebook Page.

No records provided by the Wisconsin Department of Veterans Affairs show Sen. Olsen ever attempted to reschedule his visit.

By his own admission, Olsen has been complacent with the problems at the King Veterans home, saying he has been hearing about understaffing problems at the facility for years. At the same time, Olsen voted to allow Gov. Scott Walker to raid veterans funds, including a $12 million raid taking place this year and another $18 million funding raid scheduled to take place next year and the year after.

Further problems at King include subhuman living conditions with yellow drinking water, showering/bathing being restricted to once a week, and understaffed homes unable to prevent veterans from even getting bed sores.

“Sen. Olsen voted away veteran oversight of the Wisconsin Department of Veterans Affairs and he voted to take money away from the veterans homes. And in this instance, the Senator literally turned his back on veterans and chose to eat baked goods instead of paying attention to the King Veterans Home. There is a pattern here of Sen. Olsen not caring about the veterans in our state,” Democratic Party of Wisconsin spokesman Brandon Weathersby said on Thursday. “By Sen. Olsen’s own admission, he’s heard of staffing issues at the King Veterans Home for over a decade, but when given the chance to survey the campus himself he chose a pie baking contest over Wisconsin’s veterans. What’s clear is that the Senator is only interested in feigning his support of our state’s elderly veterans.”