The lecture begins at 7 p.m. General admission is $10 and $5 for seniors and students with an ID. 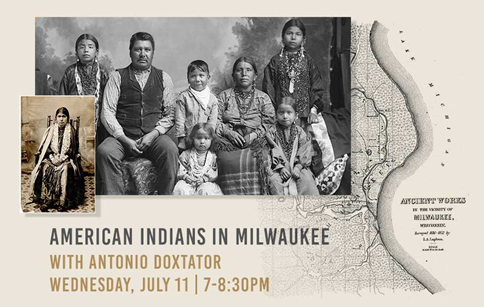 Milwaukee, WI, June 29, 2018 – The North Point Lighthouse and Museum is pleased to announce its July lecture, “American Indians In Milwaukee,” Wednesday, July 11, 2018, 7-8:30 p.m. at the lighthouse. Author and historian Antonio J. Doxtator will present a fascinating look at the people, places, and events that have contributed to the history of American Indians In Milwaukee.

Milwaukee is an Algonquin word meaning “the Good Land,” and Wisconsin’s 11 American Indian tribes have long-lived and gathered here, contributing to its name and identity.

From the Red Power Movement of the 1970s that sparked a resurgence of local American Indian culture and pride, American Indians continue to contribute to the growth and success of Milwaukee. From nationally recognized innovations in American Indian education, health, entertainment, and cultural representation to the Indian Community School, Gerald L. Ignace Indian Health Clinic, Potawatomi Hotel & Casino and Indian Summer Festival, American Indians are still here and thriving.

Doxtator is an enrolled member of the Oneida Nation of Wisconsin, and was born and raised in the City of Milwaukee. He has worked in the American Indian community since 1996 and has lived and worked on the Oneida Reservations in Wisconsin and New York, in social services, education and youth support. He is currently publishing his second book on the Doxtator-Oneida history going back to 1700, and a student in UWM’s M.S. program in Cultural Foundations of Community Education and Engagement.

The lecture begins at 7 p.m. General admission is $10 and $5 for seniors and students with an ID. Lighthouse members are free. Good City Brewing will provide complimentary beverages. Parking is available on Wahl Avenue and the Lake Park public lot just north of the lighthouse.

About The Lectures at the Lighthouse Series

The Lectures at the Lighthouse series runs from January through November and features prominent historians, authors and scholars who discuss various topics and fascinating stories related to Milwaukee and Great Lakes maritime history. Lectures are open to the public and held at the lighthouse museum located at 2650 N. Wahl Avenue in Milwaukee’s historic Lake Park. Landmark Credit Union is sponsoring the 2018 lecture series.

Visit northpointlighthouse.org/lecture-series to learn more about the 2018 lecture schedule, the speakers and their topics.

The North Point Lighthouse and Museum, located at 2650 N. Wahl Avenue within historic Lake Park, is a Milwaukee maritime treasure. Each year, thousands of visitors from the surrounding community, region and around the world experience its beauty, history and charm. Built in 1888, the lighthouse tower and keepers quarters are open to the public every Saturday and Sunday from 1-4 p.m. throughout the year, and Thursdays from 10 a.m. to 2 p.m. during the summer. Visitors can experience a maritime museum featuring exhibits, artifacts and stories, and climb the 74-ft. tower. The lighthouse is also available for private events. The lighthouse has been preserved and restored as a maritime museum through the efforts of the North Point Lighthouse Friends, Inc. and has been open for public tours, visits and events since 2007. The mission of the North Point Lighthouse Friends, Inc. is to preserve the North Point Light Station, inspire appreciation of its importance in Wisconsin maritime history and promote its use consistent with the character of Lake Park and the surrounding neighborhood.

For information about lectures, tours and events, contact Sue Grzeca, 414-332-6754 or keeper@northpointlighthouse.org.

The North Point Lighthouse and Museum, located at 2650 N. Wahl Avenue within historic Lake Park, is a Milwaukee maritime treasure. 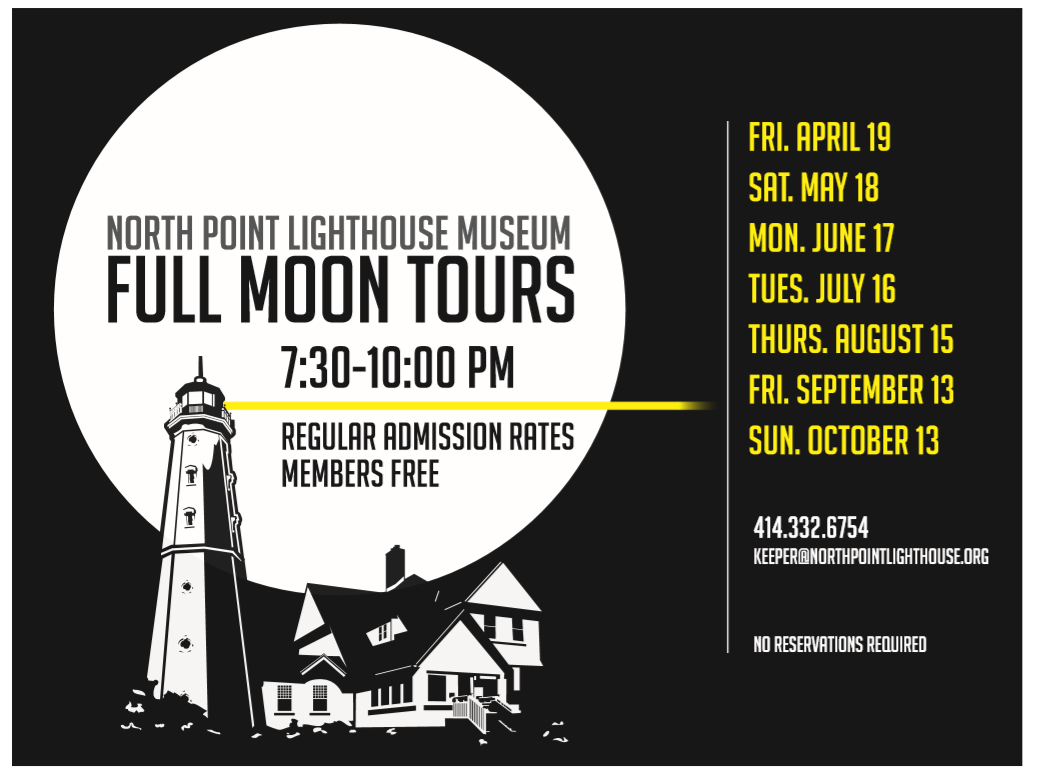 Enjoy a fabulous view of the Full Moon from the top of the North Point Lighthouse tower!