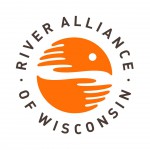 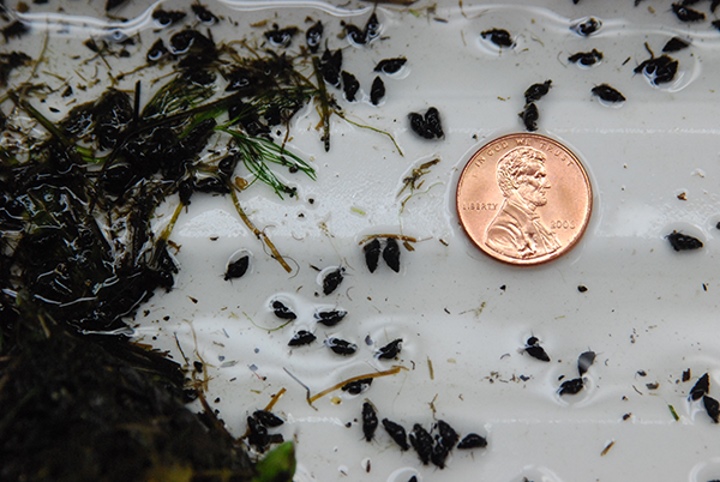 MADISON, Wis. – December 21, 2017 – Two recent discoveries of the invasive New Zealand mudsnail (Potamopyrgus antipodarum) in southern Wisconsin trout streams indicate not only are the invasive snails spreading, but anglers are likely spreading them. With Wisconsin DNR’s announcement this week of mudsnails in Rowan and Mount Vernon creeks, the number of trout streams in the region infested with the snails grows to four (Black Earth Creek snails were discovered in October 2013, and Badger Mill Creek in December 2016). There are no other known infestations of the snail in inland Wisconsin streams.

“The recent discoveries of New Zealand mudsnails in two more southern Wisconsin streams are truly a call to action to those who recreate on rivers and streams—particularly, wading anglers,” said Matt Krueger, River Restoration Program Director of the River Alliance of Wisconsin. “It’s alarming how quickly these snails are spreading. If we are to protect other streams from their negative impacts, anglers need to make ‘clean angling’ disinfection practices as common a part of their pre-and post-fishing routine as putting on and taking off waders.”

The New Zealand mudsnail is highly invasive in western states and is known to reach high abundances, outcompete native stream insects that serve as food for fish such as trout, and can alter the natural functions of streams. It remains to be seen what impacts the snail will have on streams in Wisconsin, but there is concern is that they will affect the health of trout. Research on the Black Earth Creek mudsnail infestation shows that the in-stream population is rapidly expanding.

While it’s hard to know definitively how aquatic invasive species get transported, in all probability wading anglers are spreading New Zealand mudsnails. “Here’s a very real scenario that is likely spreading mudsnails,” said Krueger. “An angler fishes in an infested stream like Black Earth Creek, picks up mud and mudsnails on his or her boots, and doesn’t disinfect the muddy boots or waders after fishing. The next week, the same angler enters the waters of a new stream, the mud containing the still-live snail drops off, and a new infestation has begun.”

It is essential that wading anglers and other stream users (like paddlers and water quality monitors) prevent the spread of mudsnails and other invasive species by 1) inspecting equipment and removing all plants, animals, mud and debris, prior to leaving a stream, 2) draining all water from gear and equipment prior to leaving stream, allowing to fully dry for at least 26 days before next use, and 3) in the case of New Zealand mudsnails, taking additional steps such as scrubbing gear (especially boots) with a brush, freezing gear, or soaking it in 120°F water. Anglers should avoid the use of felt-soled wading boots to decrease the likelihood of spreading invasive species to other streams, or use a different pair of wading boots while allowing the “infested” pair to dry for 26 days.

About River Alliance of Wisconsin
Formed in 1993, River Alliance of Wisconsin is a statewide non-profit, non-partisan citizen advocacy organization that empowers people to protect and restore Wisconsin waters. The organization’s membership includes more than 2,500 individuals and businesses and more than 80 local watershed groups – one of the largest memberships of statewide water groups in the country. For more information, visit www.wisconsinrivers.org 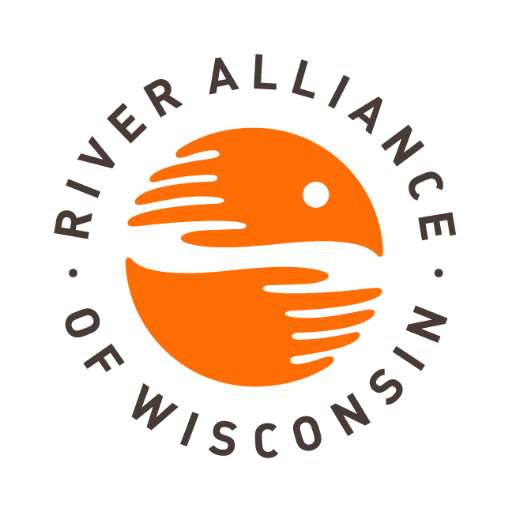