The Inaugural BBQ Event will Debut on Sunday, September 4 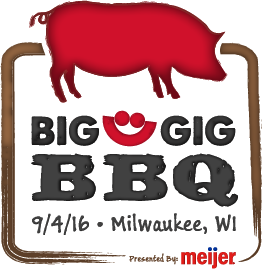 The Inaugural BBQ Event will Debut on Sunday, September 4

MILWAUKEE (February 25, 2016) – Milwaukee World Festival, Inc. officials are thrilled to announce the debut of the Big Gig BBQ, presented by Meijer, to be held on Sunday, September 4, 2016 from 5:00 pm – 10:00 pm, rain or shine. The Big Gig BBQ is also sponsored by Miller Lite and is an officially sanctioned event of the Milwaukee Rally.

This Labor Day weekend, The Big Gig BBQ will be a destination for foodies, motorcycle enthusiasts and music lovers. Savory BBQ will be served up on the south end of Henry Maier Festival Park from ten local and national BBQ experts including Atlas BBQ, Dickey’s Barbecue Pit, Double B’s BBQ and Burgers, Famous Dave’s Bar-b-que, Maxie’s, Pitch’s, Saz’s State House, Silver Spur Texas Smokehouse BBQ, Smoke Shack and The Charcoal Grill and Rotisserie. The perfect complement to BBQ is an ice cold beer and there will be plenty of it available from Miller Lite, Leinenkugel’s, Blue Moon and more!

Live entertainment at the Briggs & Stratton Big Backyard and South Pavilion will keep the party going all evening with country, rock and blues music, including a national headliner yet to be announced, and two cooking demonstrations by Biker Billy. Known for his popular syndicated public access TV show “Biker Billy Cooks with Fire,” Biker Billy takes his fiery cooking demonstrations on the road and captivates crowds with his passion for Harleys and spicy foods.

“We work hard to find new and innovative ways to bring patrons and businesses together to strengthen the Milwaukee community,” said Don Smiley, President and CEO of Milwaukee World Festival, Inc. “We are thrilled to introduce a brand new event to festival fans and continue to do what we do best, serve up great food and provide nationally acclaimed entertainment in a world class festival setting on Milwaukee’s lake front with the help of our partners.”

Tickets to the Big Gig BBQ are on sale now at BigGigBBQ.com and options include a general admission ticket for $15 or the VIPig Pass for $30 (limited quantities available). The VIPig pass includes admission to the Big Gig BBQ, four (4) 2 oz. BBQ samples from any vendor, four (4) 3 oz. beer samples, free parking and a keepsake laminate and lanyard. Parking will be available for $10 in Summerfest-owned lots. Complimentary motorcycle parking will be available on the grounds, capacity pending. Children 10 and under are admitted free!