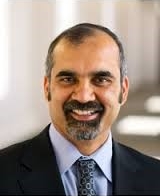 Dr. Kurpad also has been awarded the Sanford J. Larson, MD, PhD, Chair in Neurosurgery. Dr. Larson, a recipient of the MCW Distinguished Service Award, made significant contributions to the field and treated patients for nearly 40 years at Froedtert Hospital and the Zablocki VA Medical Center. His MCW colleagues and students established the chair to recognize his achievements in education, research and clinical care.

“Dr. Kurpad exemplifies the outstanding talent and expertise that our institution is able to attract and retain,” said Joseph E. Kerschner, MD, Dean, School of Medicine, Executive Vice President. “Our physicians, researchers and other healthcare providers truly make a difference in enhancing the health of our communities, and Dr. Kurpad is a leading contributor to our successes.”

Dr. Kurpad received his MD from Bangalore Medical College, Bangalore, India in 1991, and his PhD from Duke University in Durham, N.C. in 1995. He completed an internship in general surgery at University Hospitals of Cleveland, Case Western Reserve University, in 1996, and a residency in neurosurgery at that same institution in 2001. Dr. Kurpad completed three clinical fellowships as follows: July-December 1998, skull base surgery, University of Tennessee in Memphis; July-December 2000, Neuro-Oncology, University Hospitals of Cleveland; and January-June 2001, Spinal Neurosurgery, Medical College of Wisconsin.

Dr. Kurpad has held appointments as Guest Scientist, Intramural Program, National Institute of Drug Abuse, National Institutes of Health in July 2001; and Guest Scientist, Department of Neuroscience, Karolinska Institute, Stockholm, Sweden, from August 2001-June 2002. He was honored in 2015 by the University of Toronto Faculty of Medicine with the Distinguished E. Harry Botterell Professorship in Neurosurgery.

Dr. Kurpad joined the faculty of MCW as Assistant Professor, Department of Neurosurgery, in January 2002. He was promoted to Associate Professor in 2007 and achieved the rank of Professor with Tenure in 2014. Dr. Kurpad has served as Adjunct Faculty in the Departments of Neuroscience at Marquette University since 2005 and as Adjunct Professor in MCW’s Department of Cell Biology, Neurobiology and Anatomy since 2007. He served as Acting Chair of Neurosurgery from September 2015 to March 2016, when he assumed the role of Interim Chair.  From 2002-2015, Dr. Kurpad served as Chief, Neurosurgery Service at the Clement J. Zablocki VA Medical Center.  Dr. Kurpad’s clinical expertise encompasses both spinal and cranial disorders with special focus on spinal trauma, spinal cord injury, tumors of the spine and spinal cord as well as skull base tumors. He is board-certified with the American Board of Neurological Surgery. He has been listed in Best Doctors America since 2007.

Dr. Kurpad has extensive research experience in spinal cord injury and is internationally recognized for his contributions in this field as well as cervical myelopathy. As the recipient of the prestigious Van Wagenen fellowship from the American Association of Neurological Surgeons, Dr. Kurpad conducted cellular transplantation research for spinal cord injury at the Karolinska Institute in Stockholm.  He runs a laboratory at MCW with international collaborators for the study of spinal cord injury and has served as principal investigator on several peer-reviewed and non-peer-reviewed grants. Dr. Kurpad has been continuously funded extramurally from 2006 and has secured nearly $5 million in total grant funding. He previously has received extramural funding from the VA, NIH and private foundations for cell transplantation and imaging biomarker research for spinal cord injury totaling more than $2 million. Dr. Kurpad played a key role in establishing a $1.0 million spinal cord injury endowment by the Bryon Riesch Paralysis Foundation at MCW.  He has active current extramural funding from the VA Research Service, Rick Hansen Foundation and Craig Nielsen Foundation totaling more than an additional $1.7 million.

He was elected to the Editorial Board of the Journal of Neurosurgery in 2016. He also serves as an ad-hoc editor for many other neurosurgical and basic science journals, including Neurosurgery, pLOS One, JMRI, Neuroscience and World Neurosurgery. He has been a study section reviewer for the VA Research Service since 2009. In March 2012, Dr. Kurpad filed a patent for algorithm sequence for human spinal cord diffusion tensor imaging.

Dr. Kurpad is a member of the Executive Committee of the Congress of Neurological Surgeons (CNS), The AANS/CNS Joint Section of Disorders of the Spine and Peripheral Nerves and the Joint AANS/CNS Section on Neurotrauma and Critical Care. He serves as the Chair of the International Division of the CNS and has been a member of the Executive Committee of this organization since 2011 – holding a number of leadership roles for the past five years. He is a fellow of the American Association for Neurological Surgeons; honorary life member of the Neurological Society of India; and member of the North American Skull Base Society, American Association for the Advancement of Science and the Society for Neuroscience.

Founded in 1893, The Medical College of Wisconsin is dedicated to leadership and excellence in education, patient care, research and community engagement.  More than 1,200 students are enrolled in MCW’s medical school and graduate school programs in Milwaukee, 56 medical students enrolled at MCW-Green Bay, and 26 students matriculated to MCW-Central Wisconsin in 2016. MCW’s School of Pharmacy will open in 2017 or 2018 with an initial class size of 60 students. A major national research center, MCW is the largest research institution in the Milwaukee metro area and second largest in Wisconsin. In FY2015, faculty received more than $158 million in external support for research, teaching, training and related purposes. This total includes highly competitive research and training awards from the National Institutes of Health (NIH). Annually, MCW faculty direct or collaborate on more than 3,200 research studies, including clinical trials. Additionally, more than 1,500 physicians provide care in virtually every specialty of medicine for more than 525,000 patients annually.