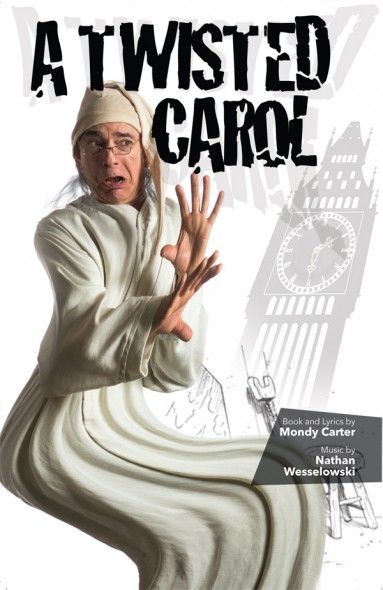 October 12, 2015 [Milwaukee] – In Tandem Theatre presents A Twisted Carol by Mondy Carter with music by Nathan Wesselowski, a brand new musical comedy that twists the classic A Christmas Carol like the “Dickens”! Tickets ($30) are available by calling the Tenth Street Theatre Box Office at 414-271-1371 or in person at 628 North 10th Street, Milwaukee, WI 53233. Senior, student, military and group discounts are available. A special New Year’s Eve package ($40) includes a champagne toast, reception and “fireworks” after the show. Visit www.intandemtheatre.org for more information, including dates and times, and to order tickets online.

Now in its 18th season, In Tandem Theatre has been bringing alternative holiday hilarity to the stage since its beginning with wildly popular original shows including A Cudahy Caroler Christmas and Scrooge In Rouge.  In Tandem’s Managing Director, Jane Flieller, will direct A Twisted Carol. “Milwaukee has a lot to offer when it comes to entertainment and at In Tandem, we’re proud of our track record of delivering outstanding alternative holiday entertainment to our audiences,” Flieller said. “We hope A Twisted Carol will rank right up there among audience favorites!”

This year, In Tandem takes the most beloved of holiday stories, applies liberal poetic license and adds saucy original music by local composer, singer and actor Nathan Wesselowski. In this fast-paced adaptation by Mondy Carter, Scrooge, the ultimate opportunist, wheels and deals with the Spirits of Christmas to assure himself the best afterlife. A delightfully cracked musical spoof with all your favorite characters as you’ve never seen them before!

PERFORMANCE DATES FOR A TWISTED CAROL:

(1)  Pay-what-you-can preview performance: tickets on sale one hour prior to curtain; no advance sales

(3)  Talk back with director and actors following the show