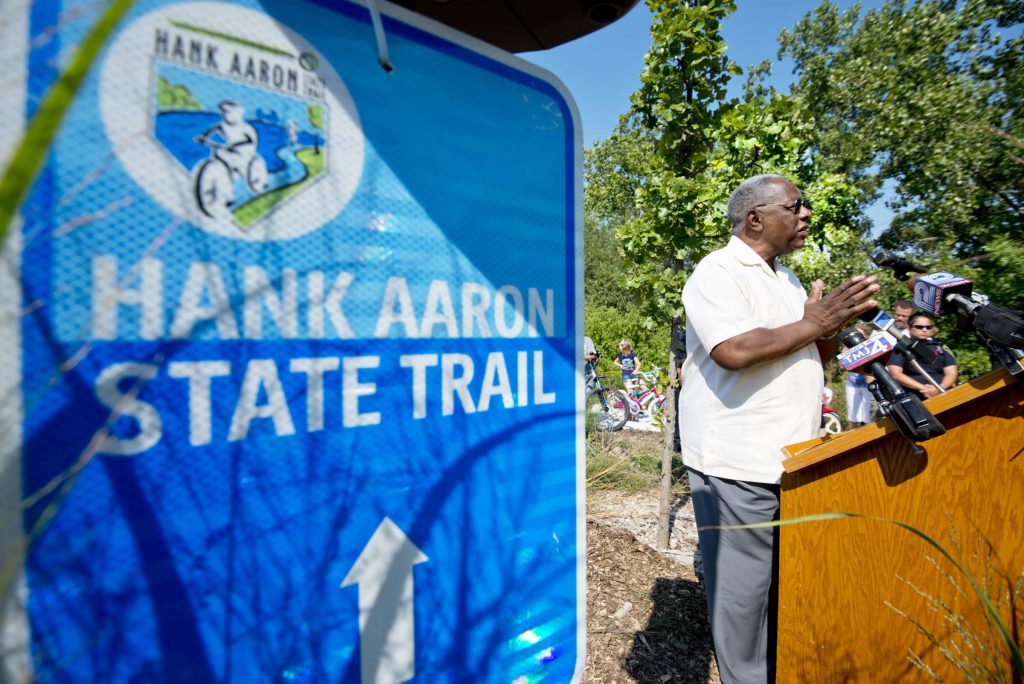 2012 – Hank Aaron at the groundbreaking for Three Bridges Park and a Hank Aaron State Trail extension to connect the Valley Passage to Mitchell Park Domes Photo by Dave Schlabowske.

Milwaukee, WI, January 2021 – The Friends of Hank Aaron State Trail (FOHAST) are saddened to hear of the passing of Henry “Hank” Aaron. “Hammerin’ Hank” was one of baseball’s greatest players and a man of enormous accomplishments and integrity. He broke many racial and cultural barriers, and the Trail, which connects the diverse neighborhoods of the greater Milwaukee area, exemplifies his legacy. We thank Mr. Aaron and his family for their dedication to our community, and offer our heartfelt condolences.

Even though Mr. Aaron lived in Atlanta after his baseball career, he remained an avid supporter of Milwaukee. His style befits the hard-working and appreciative nature of the community.

“Over the years, it was often said that…I would have been a much bigger star and made more money in a bigger city like Chicago or New York. That may be so, but I think… Milwaukee was perfect for me. Any player would have been fortunate to play in front of those fans. On Sundays, there might be 200 school buses parked outside the stadium. I used to take the streetcar to the park and walk right along with the fans as they came streaming down the hills and over the bridges from Story Parkway. It was something to see. In my rookie year, the Braves’ initial print order for tickets was the largest ticket order in the history of the printing business. We drew 2.1 million people and broke the National League attendance record in August.“

Mr. Aaron’s legacy still impacts the Milwaukee community today. Mr. Aaron and his family lent his name and support to the creation of the Hank Aaron State Trail, returning to Milwaukee for the opening of the Trail in 2006 and numerous other events on or related to the Trail. As the nonprofit tasked with enhancing, supporting, and promoting the Hank Aaron State Trail, FOHAST aims to honor his legacy by providing a welcoming public space that helps bridge the divides that exist in our community.

“Hank Aaron was authentically humble and was truly honored to have the Trail named after him. At the dedication of the Trail, he gave a speech and mentioned how honored he was, but then talked about how he hoped the Trail would show people of future generations how much it meant to “a young ballplayer so many, many years ago” to be welcomed by the people of Milwaukee. At one point, when we were briefing him on the progress of the Trail, he was so pleased that it would serve so many diverse neighborhoods and particularly children. He said, “This is great!  We need to do everything we can to get children out from behind a television screen.”

“I had the pleasure of spending time with Mr. Aaron and his wife, Billye, at many Trail events throughout the years. He was the kindest of souls, always engaging, and took a real interest in our efforts to make the trail a connecting point for the neighborhoods and for kids to get into the outdoors. Billye, in fact, was often seen participating in the 5K walk.

Our heartfelt thoughts go out to Billye at this time of loss of a true American hero. It is our obligation to carry forward his legacy of unification across people of all colors and walks of life. The Trail will persevere as a common meeting ground for the simple purpose of a walk or ride outdoors.”

While it is easy to remember the batting records and great plays, it is important to recognize the challenging path Mr. Aaron traveled to achieve success in baseball. He was part of a small group of Black players in the major leagues when he played his first game with the Milwaukee Braves in 1954. Throughout his career, he received taunts at games, hate mail, and even death threats simply due to the color of his skin. Through all the hate and adversity Aaron persevered to become one of the greatest baseball players of all time and an inspiration to millions.

After retirement, Mr. Aaron continued to break racial barriers when he was named Vice President of Player Development for the Atlanta Braves, one of the first Black Americans in senior management in Major League Baseball. He was a long-time supporter of the NAACP and co-founded with his wife, Billye, the Hank Aaron Chasing the Dream Foundation to help children achieve their dreams.

The Friends of Hank Aaron State Trail is a nonprofit organization dedicated to sustaining, promoting, and enhancing the Hank Aaron State Trail, creating a lasting legacy for present and future generations. They have sent more than 1,200 neighborhood kids to Bike Camps along the trail; installed numerous art installations and cultural signs along the Trail; coordinate environmental restoration activities; and organize several annual events to activate the trail and engage the community. More at www.hankaaronstatetrail.org. 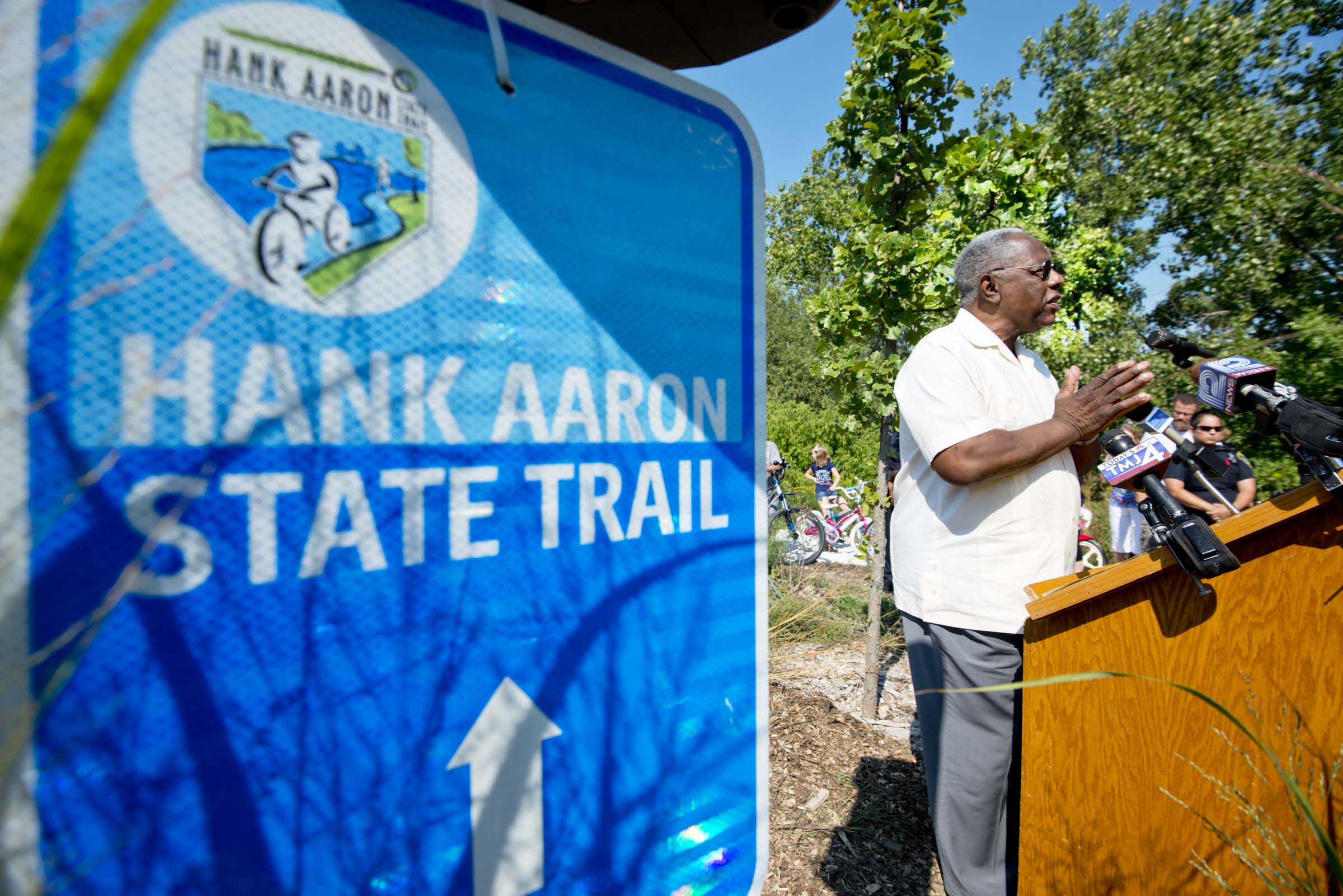 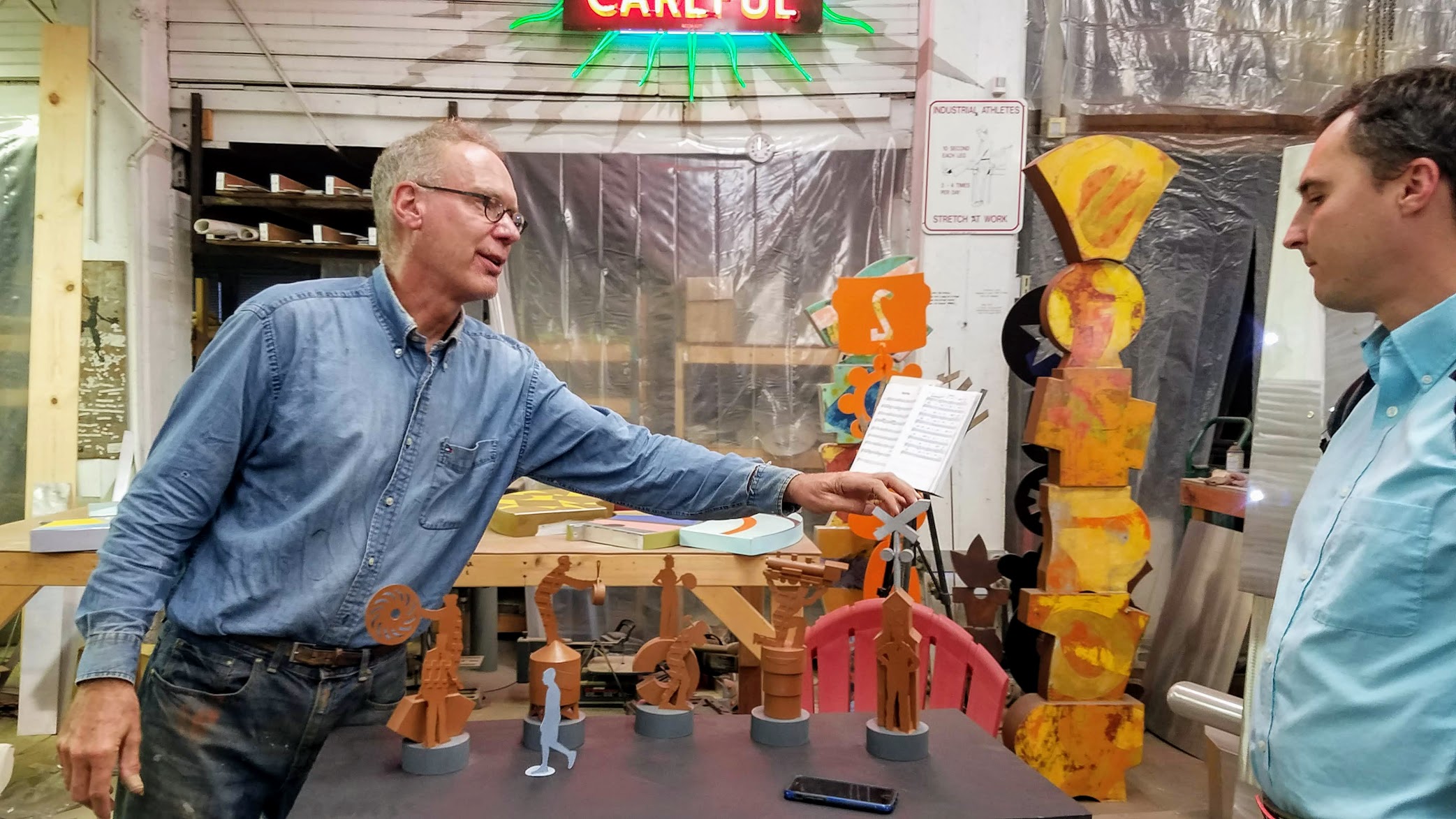 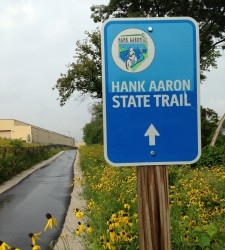