MILWAUKEE –– Just east of Miller Park, beneath the 35th and 27th Street Viaducts, a former railroad yard is being transformed into a 24-acre park. The effort is part of a partnership among the State of Wisconsin, City of Milwaukee, Menomonee Valley Partners, and the Urban Ecology Center.

The park has a little bit of everything. Serving as the new “outdoor classroom” for the Urban Ecology Center’s Menomonee Valley Branch, the public park will include 24 acres of native vegetation, re-created glacial topography offering great vistas of the city, wildlife habitat, access to the Menomonee River for canoeing and fishing, a mile extension of the Hank Aaron State Trail (connecting the Valley to Mitchell Park and the Domes), community gardens, and public art.

The only thing missing is a name. So the partners are asking the community to submit their suggestions. “This is a once-in-a-lifetime opportunity,” said John Gurda, Milwaukee historian and a selection committee member. “Lots of people name their babies, but who gets to name an entire park?”  People should submit their suggestions at RenewTheValley.org through Friday, March 22.

For thousands of years, this area of the Menomonee Valley was part of a wild rice marsh, where the Potawatomi gathered with other Native Americans during the harvest. In the late 1700s, the first permanent trading post in Wisconsin was established here for commerce between the French fur traders and the native people. In the 1900s, when Milwaukee was known as the “Machine Shop of the World,” this site became a rail yard of the Milwaukee Road Shops, an enormous complex that made rail cars and locomotives and was one of the largest employers in Milwaukee.

After a decade of planning and redevelopment, the site will open July 20 as a new public park. “The park will be a community effort for years to come,” said Laura Bray, Executive Director of Menomonee Valley Partners. “Getting people engaged in naming the land is the first step. In the next several years there will be many opportunities for people to help with plantings as the park continues to grow and develop.” The land is owned by the Redevelopment Authority of the City of Milwaukee, managed by the Wisconsin Department of Natural Resources (WDNR) as part of the Hank Aaron State Trail, and will be the outdoor science classroom of the Urban Ecology Center, which will run programs there throughout the year.

The names submitted will be vetted by a selection committee that includes representatives from several nearby neighborhoods, the City, WDNR, Menomonee Valley Partners, Urban Ecology Center, Potawatomi Community Foundation, and others. The committee will select a name that relates to the land’s history, its future, or something uniquely Milwaukee and put forth a recommendation for approval by the Wisconsin Department of Natural Resources and the Redevelopment Authority of the City of Milwaukee. A name will be announced prior to the July opening. Follow the discussion at #namethepark on Twitter.

The park is part of Menomonee Valley – From the Ground Up, a collaborative effort of Menomonee Valley Partners, Urban Ecology Center, the State of Wisconsin, and City of Milwaukee. Menomonee Valley – From the Ground Up is a comprehensive effort to weave the Menomonee Valley back into the community and add key assets to job accessibility, science education, public and environmental health, and neighborhood vitality. The effort is implementing $25 million of interconnected projects, including a six-mile extension of the Hank Aaron State Trail, three bike and pedestrian bridges in the Menomonee Valley, the establishment of the Urban Ecology Center branch in the Valley, and the transformation of a vacant rail yard into a park. Public and private partners have raised $22.5 million to date, leaving $2.5 million to raise by July 1. 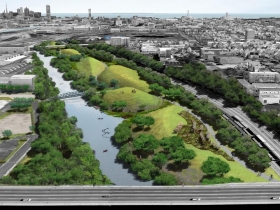 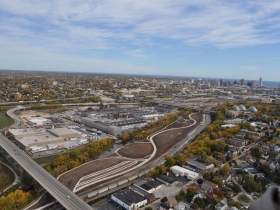