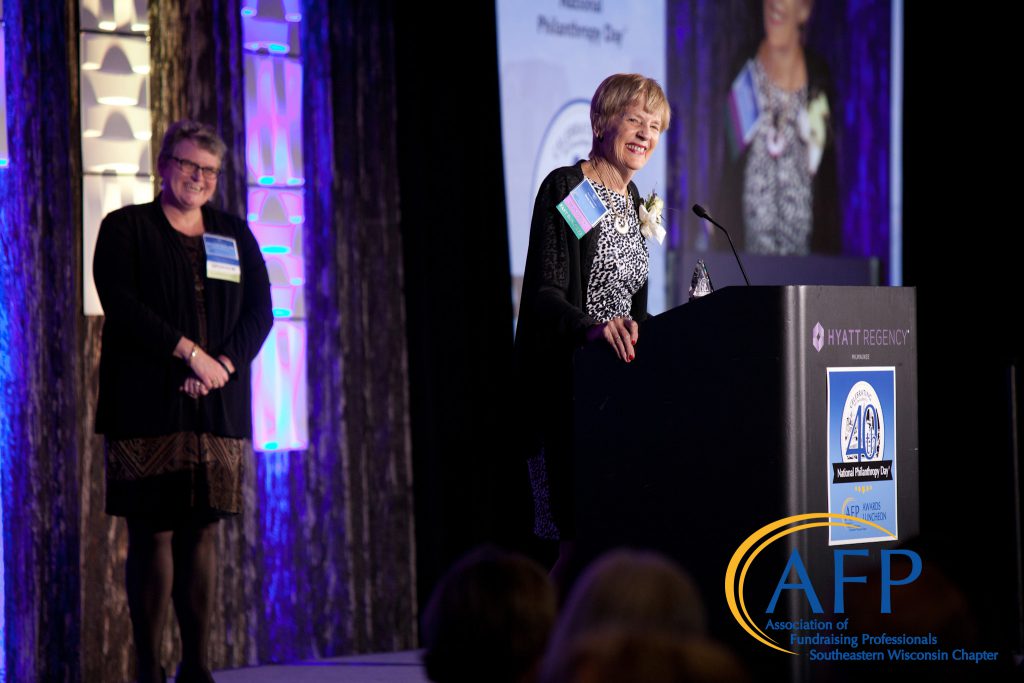 Doris Heiser accepted a special 40th Anniversary Trailblazer Award. AFP board chair, Nancy Seidl Nelson, is on the left. Photo courtesy of the Association of Fundraising Professionals of Southeastern Wisconsin.

Milwaukee, Tuesday, November 13, 2018— On November 13th, The Association of Fundraising Professionals of Southeastern Wisconsin (AFPSEWI), with sponsorship from the Greater Milwaukee Foundation, honored outstanding individuals and organizations who improve our community through philanthropy at the 40th Anniversary of National Philanthropy Day.

The awards luncheon, held at the Hyatt Regency Milwaukee celebrated philanthropy and its impact on improving our community and advancing our economy.   National Philanthropy Day is celebrated across the country, but the Milwaukee event is one of the longest-standing in the country. The event was attended 550 cross-sector leaders from southeast Wisconsin.

“Wisconsinites give billions of dollars annually to support charitable services and programs in our state. National Philanthropy Day is a way for us to honor exceptional contributions by donors and professionals in our local community,” said Nancy Nelson, Board President of the Association of Fundraising Professionals Southeast Wisconsin.

Recognition was given to the following honorees:

The Leave a Legacy Award was given to the late Al Troyke for or his commitment to the community through a planned gift. He was nominated by Bethesda Lutheran Communities. Al Troyke was humble man who gave generously of time and money to help people with intellectual and developmental disabilities, inspired by his own family’s experience.

The Todd Wehr Volunteer Award was given to Wendy Carlson for her sustained volunteer dedication in raising philanthropic funds. Carlson was nominated by Susan G. Komen Wisconsin. A Senior Vice President at Associated Bank, Carlson has been an enthusiastic volunteer leader at Susan G. Komen Wisconsin for the past seventeen years, inspired by her own battle with breast cancer.

The Philanthropic Youth of Today Award as given to Katie Eder for making a difference through philanthropic leadership. She was nominated by the Greater Milwaukee Foundation. Eighteen-year-old Katie Eder is the founder of an international writing program called Kids Tales which has inspired children to write across the globe.

The Evan P. Halfaer Award was given to Harris Turer for his outstanding record of philanthropic leadership. He was nominated by Operation DREAM. Owner of the Milwaukee Admirals and major shareholder of the Milwaukee Brewers, Turer has a deep passion improving the lives of local youth. He is a key supporter of Operation DREAM, Boys & Girls Club, and numerous other organizations.

A special 40th Anniversary Trailblazer Award was given to Doris Heiser for her distinguished service in sharing resources with charitable organizations. This award was endorsed by the AFPSWI Board of Directors. Heiser served in several capacities, including Director of Development and Donor Services, at the Greater Milwaukee Foundation for over twenty-seven years, retiring in June, 2011.  She led all Foundation efforts in donor services and resource development for the great majority of that time and was part of team that contributed to the tremendous growth the Foundation. Her commitments are not limited to her professional work, serving as a board member and advisor for countless nonprofits in the greater Milwaukee community.

The Business Journal served as the media sponsor for the awards.

The Association of Fundraising Professionals (AFP) is the professional association of individuals and organizations that generate philanthropic support for a wide variety of charitable institutions. Founded in 1960, AFP advances philanthropy through its 33,000 members in more than 244 chapters throughout the world. AFP chapters throughout the US and Canada will celebrate National Philanthropy Day in November.