The Moderne, the long awaited project on the corner of 3rd and Juneau, is moving ahead. The City, through RACM, is aiming to provide $10,000,000 in financial assistance to the project. A deal that is very likely to be approved. The building is to be largely an apartment building with first floor retail and a few condos at the top three floors. Originally intended to be 80 condos, the project is now 154 apartments and 33 condos spread over 30 floors.

“We can put a wrench in the process”

So says Jill Capicchioni, of the Historic Brewers Hill Association, in an email to the neighborhood mailing list.

Just How Much TIF is Enough?

Municipalities large and small utilize Tax Incremental Financing (TIF) as a tool to encourage economic development within their borders.

In what can only be characterized as a transparent attempt to prop up Milwaukee County's budget, the Board of Supervisors and County Executive Walker appear poised to push the Milwaukee County Grounds land sale to the University of Wisconsin-Milwaukee through. 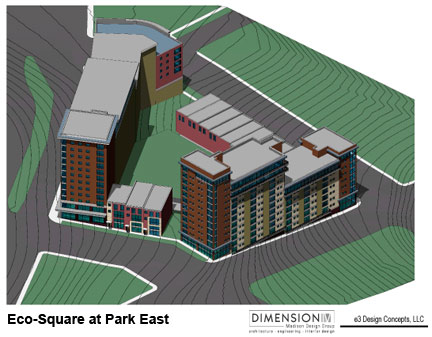 The tale of the Fair Market Development, LLC Park East development proposal is one already lined with intrigue.

Tom Daykin did some digging and was able to uncover that the final request from Gatehouse Capital Corp. was $18 million in public money for the Palomar.

What is the Problem in the Park East?

The Park East Park? Absolutely Not

In response to the announcement of the failing of The Residences of Palomar, the Milwaukee Journal Sentinel ran an editorial talking about the idea of building a temporary park in the Park East land reclaimed from the former freeway spur. The idea is a bad one.

Haven't seen any official announcement yet, but we've heard from a credible source close to the project that the The Residences at Palomar project has been canceled. We'll update this post as we learn more. At the moment, calls in to the project are going unanswered.

Resolution 071564 proposed the vacation of two “paper” alleys to support the Palomar development project within the Park East. Apparently Alderman Bob Bauman read Mary Louise Schumacher‘s article in the Journal Sentinel, History lost in Park East bait-and-switch, because he stated that “I see this as a bait and switch” referring to the dramatic change in design that the Palomar project has undergone since it was originally proposed before Milwaukee County. The original design included the utilization and preservation of both the Sydney Hih and the Gipfel Brewerys whereas the latest design would demolish the Sydney Hih structure and move the Gipfel Brewery to another site. The committee voted to hold this file in attempt to exert some influence over this development. Normally the City of Milwaukee would have influence over development projects that involve land sales and zoning changes but as the new design required neither this is an unusual course of action. Resolution 080211 was a communication from the Public Policy Forum regarding their report on the Milwaukee County Transit System (MCTS). The report indicates that in coming years MCTS will have completely spent all of a $44 million reserve of funds and will be projecting deficit spending. It goes on to show how MCTS has spent capital funds to support operational budgets and by doing so has deferred the purchase of 150 new buses. These deferments have pushed maintenance costs higher and will help create a $18 to $20 million dollar hole in upcoming budgets.

This was one of the shorter and less volatile City Plan Commission meetings in recent times. Resolution 071564 proposed vacating two alleys in the Park East redevelopment area to allow for construction of the Palomar. These alleys were referred to as “paper” alleys indicating that they had been plotted but never actually constructed. The commission unanimously approved this resolution and forwarded it on to the Zoning, Neighborhoods & Development Committee.

The Sydney Hih Square development has gone through, many iterations, public debate of TIF financing, the shuffle of lead developers, but now has taken a small step forward. This sign of progress is seen in the launching of The Residences at Hotel Palomar website. The site’s launch is in part preparation for pre-sales and fully with the intent of creating a buzz. The site announces the opening of a sales center in April 2008 and with this launch it may make it possible to see a ground breaking yet this year. The Residences at Hotel Palomar: http://www.milwaukeepalomar.com/

The controversial Sydney Hih project , that last summer was turned down for city financing of a TIF, appears to moving forward again. The first indications were the signing of multiple tenants to the project as recently reported in the Bizjournal article “Ruvin recruits Park East tenants”. The second significant step forward occurred this morning when the Public Works Committee approved a resolution agreeing to a long term lease with Ruvin Development Inc. of the city’s parking garage at 4th and Highland. This is important because Ruvin Development Inc.’s attempts to receive a TIF district revolved around the project’s perceived parking needs, so this agreement should allow Ruvin Development Inc. to move forward with the project. Additionally this will create a new revenue stream for the City of Milwaukee and better utilizes a city owned parking structure. I believe these two recent developments are very encouraging signs and that the Sydney Hih project may soon get underway. To follow this development I’ve started a flickr set, Sydney Hih that I will update with new pictures to keep track of the progress. Please note currently there’s just one photo as no construction has begun. Articles Ruvin recruits Park East tenants Plans on tap to rejuvenate Gipfel Brewery Billion-dollar building boom Gatehouse Capital and Ruvin Development select Kimpton for Milwaukee boutique hotel opening late 2009