FlexRide, a last-mile transit service, would expand the suburban areas it takes Milwaukee residents to. 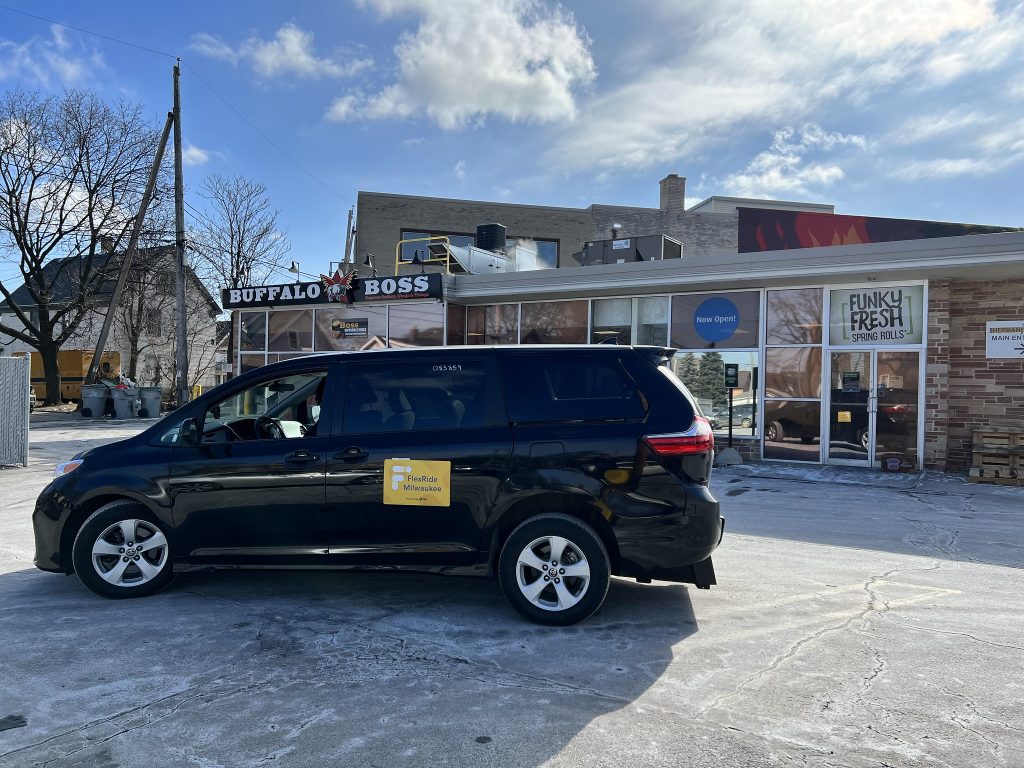 A micro-transit service connecting Milwaukee residents to jobs in suburban communities called FlexRide is planning to expand its service area in 2023.

The service was developed by MobiliSE as a low-cost, on-demand transportation option that connects Milwaukee residents to jobs in Waukesha County. It launched on a pilot basis in 2022.

The service is considered a “last-mile solution” for Milwaukee residents, connecting riders to jobs or destinations beyond the Milwaukee County Transit System (MCTS) service area. It’s an on-demand service, similar to Uber or Lyft, that picks up riders from any location within a pick-up zone on the north side of the city and brings them to any location within a drop-off zone in Menomonee Falls. If a rider doesn’t live in the pickup zone, they can get there using MCTS fixed-route bus service.

The service was launched in 2022 with a $1 million grant from the National Science Foundation. The planned expansion would increase the footprint of the pick-up zone in Milwaukee and the existing drop-off zone in Menomonee Falls and Butler, as well as add two new drop-off zones in Franklin and New Berlin, said Dave Steele, executive director of MobiliSE, to county’s ARPA Task Force Thursday. Steele said the growth would “triple the footprint of the program.”

A number of other organizations are partnering on the project, including the Southeastern Wisconsin Regional Planning Commission (SEWRPC).

The plan is to use approximately $6.7 million in committed and pending funding from a number of sources to expand the service and operate it for the next two years beginning April 1. The bulk of the funding is coming from a $4.2 million grant from the state and $1.3 million from Milwaukee County, which is still pending before the Milwaukee County Board. The state and county funding would come out of the entities’ allocation of federal funds through the American Rescue Plan Act (ARPA).

Steele’s organization, along with Employ Milwaukee, are working together to turn childcare centers into hubs for FlexRide pickups and use some of the state funding to subsidize childcare costs for FlexRide passengers.

Following the expansion, the goals for FlexRide include being able to provide 750 rides per week. This figure, according to Steele, is extremely conservative. Responses from contractors seeking to operate the service for the next two years suggest it could provide nearly double that amount.

The pilot project service was provided by Via Transportation. MobiliSE opened up the operating contract for new providers in September, but has yet to select an operator for the expansion.

The pilot phase of FlexRide outperformed expectations, according to those involved. Eric Lynde, SEWRPC chief special projects planner, said the service has provided more than 11,000 rides since it began and that ridership has increased every month since it launched, with the exception of a slow-down around the holidays in December.

Supervisor Peter Burgelis asked about the cost-per-ride for the service, saying that he thought the figures provided by the project partners indicated it would be more than $70 a ride during the second phase of the project.

Get a daily rundown of the top stories on Urban Milwaukee
Steele and Lynde said the per-ride figures were based on the conservative ridership estimates, and that as ridership expands the cost-per-ride would go down. The cost-per-ride of the pilot service is approximately $41, Lynde said.

The county’s ARPA Task Force recommended the $1.3 million investment for approval by the county board, which will consider the funding request in March.

Urban Milwaukee President Jeramey Jannene serves on the board of MobiliSE.