Built in 1907 as a tied-house tavern. Plus: A recap of the week's real estate news 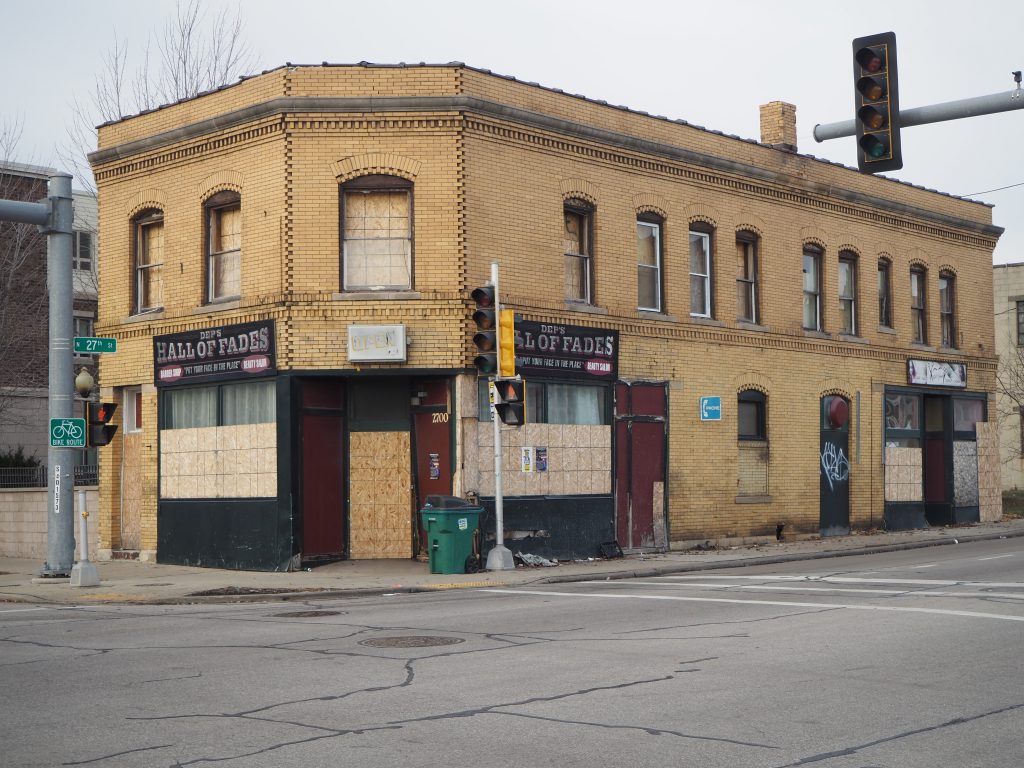 Do you have big business dreams for 2023?

The Department of City Development (DCD) has an array of properties available. One of the latest to hit the market is a two-story commercial building at the busy intersection of N. 27th St. and W. Lisbon Ave.

The two-story, 3,834-square-foot structure is currently configured as having a commercial space on its first floor and a three-bedroom apartment upstairs. For most of the past two decades, it housed Dep’s Hall of Fades, a barbershop.

The brick structure was built in 1907 as a tied-house tavern affiliated with the Joseph Schlitz Brewing Company. But if you want to serve the beer that made Milwaukee famous again, you’ll need to include a “significant food component” according to the city’s listing sheet.

DCD is looking for $25,000 for the property, 2700-2702 W. Lisbon Ave. The future owner is expected to maintain or expand the first-floor windows and touch up the facade. Based on DCD’s low-resolution photos, the interior needs to be cleaned out, but appears otherwise sound.

The city acquired the building via property tax foreclosure in 2020 from Darrell Pate, who operated the barbershop. It was assessed for $93,500 at the time.

A historical land-use report shows that the building had a long list of tenants before the Hall of Fades. It’s perhaps best known for its multi-decade history as a tavern, including Bart’s Tavern, Wes’s Chit Chat Bar and Athelene’s. But in various configurations, it also housed a candy and ice cream shop, dentist’s office, beauty salon, furniture store, restaurant and shoe store.

According to the Wisconsin Historical Society report, the structure was designed by Charles Lesser.

Get a daily rundown of the top stories on Urban Milwaukee
It’s unquestionably the most handsome structure at the intersection, once marketed as a major streetcar transfer point. But it has little competition today. A gas station is located at the northeast corner, while the two southern corners now feature slip turn lanes instead of buildings after a 1970s street widening project.

The listing sheet suggests future uses as an office, store, artist studio or cafe, all of which are likely to fare much better should a more urban form return to the intersection. Evidence of such an improvement is visible in a sister structure, Club Garibaldi at 2501-2507 S. Superior St. The Bay View building was designed by Lesser for Schlitz at virtually the same time as the Lisbon structure. The assessor says it’s worth 21 times that of the Lisbon property’s list price.

DCD is accepting offers on a rolling basis. All purchases are subject to Common Council approval and must be fully taxable.

A copy of the listing sheet is available on Urban Milwaukee. 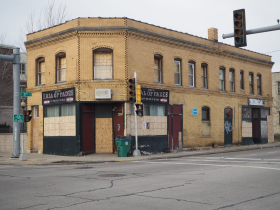 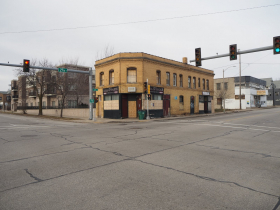 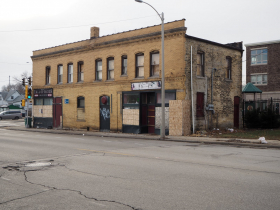 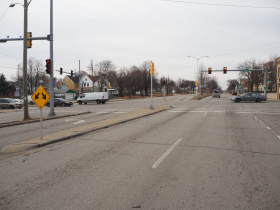 The first residents were welcomed into the largest private, affordable development in Wisconsin history earlier this year. The Community Within The Corridor, a redevelopment of a former Briggs & Straton factory campus, opened its first apartments at N. 32nd St. and W. Center St. in July.

A partnership of Que El-Amin, Mikal Wesley, Rayhainio Boynes and Roers Companies is redeveloping the vacant, 6.99-acre manufacturing campus. Work is nearing completion with the 197 units effectively filling up as soon as they’re available.

The two-block campus lines the north side of W. Center St. just west of the 30th Street railroad corridor. Much of the six-building complex, the oldest portion of which dates back to 1906, has been vacant since the 1980s according to a 2020 city report. It was built in phases with a wide variety of building shapes and sizes, the result of which flows through to the units.

From Classroom To Reality at 25th and North

Grant, in partnership with the Emem Group, is redeveloping the vacant, two-story building at 2501-2503 W. North Ave. into a home for her nonprofit, UniteWI, a restaurant and two apartments.

UniteWI coordinates the work of community health workers to provide at-risk populations with physical and behavioral health and social services. She launched the organization in 2016.

Grant graduated from the Associates in Commercial Real Estate (ACRE) program in 2017, a collaborative effort led by LISC Milwaukee to train people of color for careers in real estate. “This actually started off as my project,” she told Zoning, Neighborhoods & Development Committee in 2021 of her ACRE training and capstone project.

The City of Milwaukee has a list of environmentally-contaminated properties it could seize in property tax foreclosure, but it won’t unless someone steps forward to buy one immediately. It’s appropriately called the “Do Not Acquire” list.

Infrequently, someone comes forward with a plan to redevelop one of these sites. Whether it’s a top-to-bottom cleanup or a new use that can skirt any issues, the city will initiate foreclosure and transfer the property to the new owner on an as-is basis.

A growing contracting firm is going to attempt to make a go of it with a former automobile repair shop on the city’s Southwest Side, relocating from West Allis in the process.

Borda Enterprises is purchasing the former Layton Park Auto Body property at 3322 W. Forest Home Ave. The 15,594-square-foot parcel includes a 3,117-square-foot building that husband-and-wife team Dan and Jennifer Borda will rehabilitate. They’ll also have to clean up all the garbage dumped at the rear of the lot, which borders Union Pacific railroad tracks and a salvage yard.

What To Look For On Your Property Tax Bill

If you’re one of the recipients, you’ll want to make sure a valuable credit is included on your bill.

The annual credit is funded by the State of Wisconsin‘s proceeds from the Wisconsin Lottery, on-track betting and bingo. The credit, which is calculated based on the school tax rate, is available to all Wisconsin homeowners on their primary residence. But in a number of cases, it’s not automatically applied.

An aging Milwaukee senior-living community located just east of N. 76th St. would be rehabilitated under a proposal from its new owners. It would also lose much of its senior-only housing.

A large portion of the 322-unit Trinity Village, 7500 W. Dean Rd., would become open to residents of all ages as a result of converting vacant apartments into market-rate housing.

The Common Council unanimously approved a zoning change on Dec. 13 to allow 226 assisted and senior-living apartments to be rehabilitated as all-ages apartments. Ninety-six units, virtually all of which are occupied today, would continue to be restricted to residents ages 55 and older and an 87-bed skilled nursing facility would continue to operate.

The complex, one large building with several wings, was initially known as Friendship Village when it was developed in 1973 by a group of religious nonprofit groups. It was expanded several times and ultimately came to be owned by a predecessor of Advocate Aurora Health Care until being sold in 2004. It was then rebranded Trinity Village and, under the latest plan, would be rebranded Sycamore Place. It was purchased by Florida-based AB Asset Management in 2021 for $25.1 million.

The leaders of a small but growing law firm are the new owners of a six-story, Westown office building.

The firm will move to the 25,000-square-foot building’s sixth floor from leased office space at 839 N. Jefferson St. Other tenants in the newly-acquired building include Walgreens’ Community Pharmacy and Vivent Health.

OVB specializes in civil, business and employment law. According to its website, the firm’s employment roster currently includes three attorneys, two paralegals and an office assistant. Ovbiagele, who founded the firm in 2016, frequently represents business owners on licensing issues before the Milwaukee Common Council.

A game of musical chairs at Marquette University is yielding a new home for its growing College of Nursing.

Last week the university began construction work on the redevelopment of Straz Hall into a new home for the nursing program. The building became available following the relocation of the College of Business Administration into a newly-completed building at 1530 W. Wisconsin Ave.

The nursing school won’t simply get the business school’s hand-me-down, but will have a newly-expanded home as part of a larger strategy to grow the program.

The five-story building, 1225 W. Wisconsin Ave., will gain a new front door and large atrium that faces Marquette’s pedestrian-only quad between Wisconsin Avenue and Clybourn Street. Interior spaces will include an auditorium, flexible classrooms and a newly-created, wrap-around service center to support students. Labs will be interspersed throughout the building and a student break room will overlook the campus. Faculty and staff offices will be included on the upper floors.

Milwaukee County plans to put $2.5 million into a housing development in South Milwaukee that will create 82 affordable housing units.

The project is the redevelopment of the former Bucyrus campus, 1100 Milwaukee Ave. into new commercial and residential real estate by two firms, Scott Crawford Inc. and J. Jeffers & Co.

The county set aside $15 million of its federal American Rescue Plan Act (ARPA) grant to support affordable housing projects in county suburbs and partnered with the Community Development Alliance (CDA), an affiliation of local community development funders, to solicit and review proposals. The funding is being disbursed in two rounds, with $12 million in the first and $3 million in the second.