Anti-expansion coalition pushes 'Fix at Six' rather than eight-lane I-94 expansion. 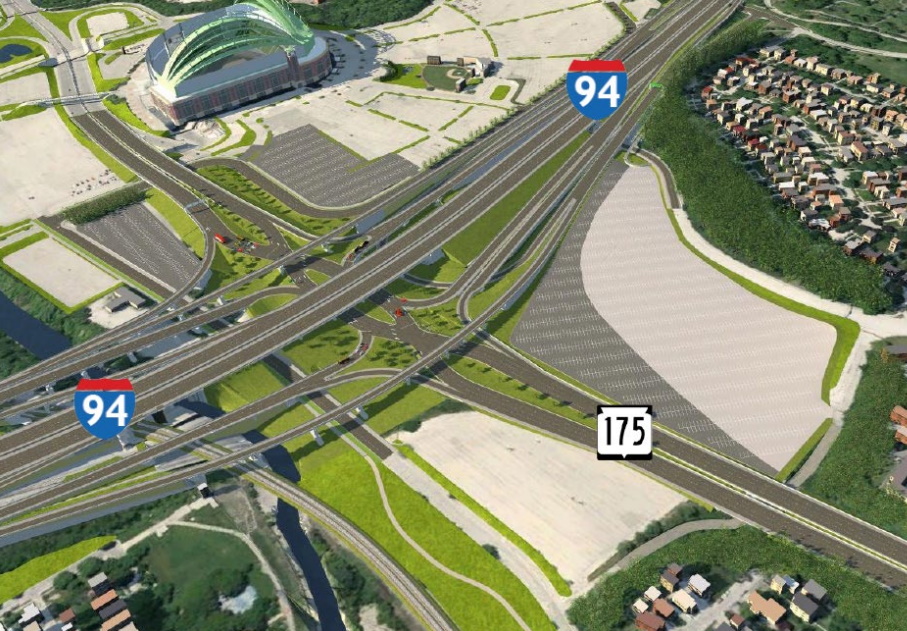 The Wisconsin Department of Transportation held the first of two newly added public hearings Monday afternoon on the proposed expansion of Interstate 94.

The $1.2 billion proposal calls for expanding the interstate between 16th and 70th streets and rebuilding the Stadium Interchange with a new design. The project would add a fourth lane to both directions of the freeway as part of the 3.5-mile reconstruction, making it eight lanes as it is on other sections.

The meeting was well attended. Donna Brown-Martin, director of the Milwaukee County Department of Transportation (MCDOT) told Urban Milwaukee that she worked on major freeway projects like the Marquette Interchange during her time at the WisDOT and said “this is the largest turnout I’ve seen for providing comment.”

The project has faced fairly widespread criticism in the Milwaukee area, which has a long history of interstate projects that have cleaved communities in two, contributed to racial segregation in the metro area and destroyed neighborhoods. A group organizing against the expansion proposal is called the Coalition for More Responsible Transportation (CMRT).

The coalition does not oppose rebuilding the interstate, but the plan to expand the freeway. The group and many others in the community continue to advocate for a “Fix at Six” proposal that advocates claim has never been fully reviewed by WisDOT.

The Fix at Six proposal was developed by Mark Stout, a transportation planner who formerly worked with the New Jersey Department of Transportation. The proposal, which is different from WisDOT’s own six-lane study, would freeze the highway at its current six lanes and see the state make major investments in public transit and multi-modal infrastructure in the corridor.

Get a daily rundown of the top stories on Urban Milwaukee
One of the organizations in the coalition is the Milwaukee Inner-city Congregations Allied for Hope (MICAH). Pastor Richard D. Shaw, president of MICAH, said, “To solve our transportation problem requires us to better our public transit system to allow people to have opportunities to take advantage of opportunities. And what I mean by that is, they have to have access, because I’m a firm believer that an opportunity is not an opportunity if you don’t have access to it.”

Milwaukee Riverkeeper Cheryl Nenn, a member of the coalition, said the freeway expansion would add more than 40 acres of concrete to the corridor, worsening stormwater runoff and pollution in the Menomonee River and other nearby streams. The stormwater would also increase the water running into the combined sewers during a large rain event.

“Even at its current size, the stadium interchange and highway are sending too much pollution into local rivers and highway expansion will exacerbate this problem,” said Nenn.

WisDOT officials maintain that their modeling suggests the eight-lane roadway will reduce traffic congestion, be safer and allow for easier construction of modern updates to the freeway design. “We have studied and designed a six-lane alternative,” said Brian Bliesner, WisDOT project development chief, but noted that a six-lane option “that improves safety and stays in the footprint does not exist and is not feasible.”

Milwaukee County Supervisor Peter Burgelis was the first to speak during the meeting’s public comment section. He endorsed the Fix at Six proposal and rebuilding the interstate within that framework. “The six-lane option will best preserve quality of life for surrounding neighborhoods,” he said. “A six-lane design combined with permanent transit investments will best serve the transportation needs of all of Milwaukee County.”

Burgelis is the author of a resolution that, if passed, would make it the official position of Milwaukee County government to oppose the freeway expansion and support a proposal like Fix at Six.

The coalition includes members, like MICAH and Midwest Environmental Advocates (MWA), that sued WisDOT and the state in the aftermath of the Zoo Interchange project, arguing that the environmental review was inadequate and the project violated federal anti-discrimination laws. The case was settled when the state agreed to provide $13.5 million for public transit in Milwaukee County.