The Streets That Solomon Juneau Planned

A walk through Juneautown mixes downtown high rises and a surprising number of sculptures. 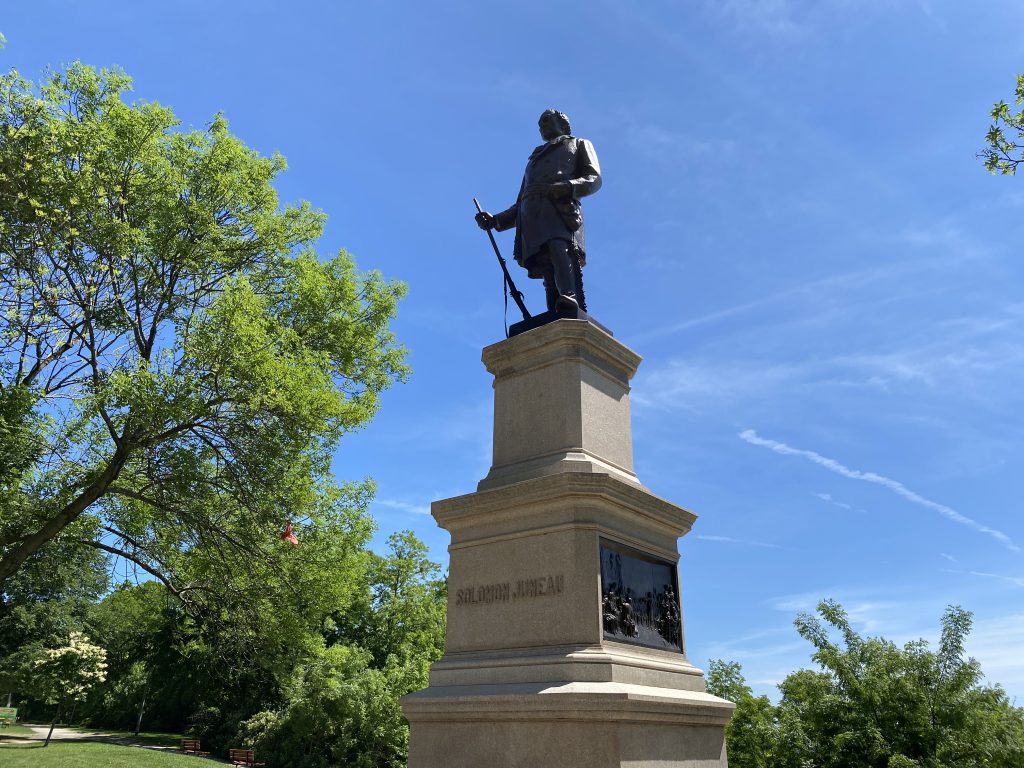 Solomon Juneau, fur trader, voyageur, frontiersman, entrepreneur, and father of 13, was no fool when he got into the business of real estate speculation. He came to Milwaukee in 1818 after he met Jacques Vieau, a well-established fur trader from Green Bay who had an outpost in Milwaukee. Juneau soon married Vieau’s daughter Josette. She was 17; Juneau was 27.

With his partner Morgan Martin, Juneau purchased 130 acres north of Wisconsin Avenue and east of the Milwaukee River. He platted lots, hired contractors to grade streets, and began selling parcels of land in this prime area that soon became known as Juneautown.

Juneau was appointed Milwaukee’s first postmaster in 1835 and among his many successes, he is also remembered for helping to launch the Milwaukee Sentinel. When Milwaukee became a city in 1846, Juneau was its first mayor, an impressive accomplishment for a French-Canadian who gained his citizenship in 1831. By 1846, when the city was incorporated, Milwaukee was no longer a wilderness, but instead, a thriving community of more than 12,000.

In 1848, Juneau and Josette left the city and founded a rural settlement which he named Theresa, north and west of Milwaukee in Dodge County. Here he reentered the fur trade, opened a grist mill and general store, and returned to his former life as a frontiersman.

He lived in Milwaukee for 30 years and in that time, he established much of the area we now know as East Town and Yankee Hill and thus made it possible for wealthy settlers to build their homes and businesses on land he had purchased, platted and paved.

Today there are many public sculptures in this area of the city, including one of Juneau himself, appropriately located in Juneau Park. You will see a dozen works of art on this walk that features sculpture north of Wisconsin Avenue and east of the Milwaukee River. The walk also includes an adjoining area of the Lower East Side, to add more sculptures to our tour.

Start at the corner of N. Cass St. and E. Lyon St. where you will find a charming statue, “Boy with Goose,” inside the fenced area. Pause at the fountain or sit on one of the benches to enjoy this oasis on the bustling east side. Continue south on Cass and east on E. Ogden Ave. to N. Prospect Ave. Walk north on Prospect to 1360 to see the Holocaust Memorial, 22 panels designed to evoke the pages of a book. Each panel is marked with the name of a concentration camp. Railroad ties suggest the trains that took the Jews to the camps and the granite obelisk is symbolic of the chimneys in the camps. The inscription “Zakhor” means “Remember.”

Walk south on Prospect past the sculpture of Robert Burns and past the Spite House, each described in the Prospect Avenue Walk we wrote. When you come to Juneau Park, look for the larger-than-life sculpture of Leif Erikson, The Discoverer.

Continue through the park until you come to the statue of Solomon Juneau at the south end. He’s positioned on a large pedestal with a bronze relief on the north side that shows him being greeted by Native Americans. Under the bronze it reads, “Solomon Juneau First Mayor of Milwaukee MDCCCXXXXVI.

Where Prospect meets the bike trail, note the flagpole, a sculpture presented to the city by the Milwaukee Chapter of the Service Star Legion, the group that sells red poppies to support veterans. The artist, Benjamin Hawkins, inscribed it “to the memory of those who served in 1917, 1918.”

At Mason Street, detour left to the War Memorial Center to see the statue of Abraham Lincoln. This statue was a civic effort that began in 1916 when Mayor Daniel Hoan organized a fund drive. He collected $23,000 in corporate gifts as well as nickels and dimes donated by children. After 61 artists competed for the honor of creating Lincoln’s likeness, Italian sculptor Gaetano Cecere took 18 months to complete this 3,000-pound sculpture. Because “simplicity is what I strove for in this work,” Cecere omitted the famous beard, or perhaps it’s missing because Lincoln didn’t grow it until he was 52.

Now return to Wisconsin Avenue to view the large orange sunburst, “The Calling.” Designed by Mark di Suvero, it’s constructed of steel I-beams that stand 40 feet high and according to the artist, represent Milwaukee’s industrial past and cosmopolitan future. It’s been an ongoing source of controversy since it was installed in 1982, more recently because some feel it blocks the view of the Calatrava wing of the Milwaukee Art Museum, while others view it as a magnificent work of art that punctuates the east end of Wisconsin Avenue.

At the corner of Wisconsin and Prospect, take a stroll in the Northwestern Mutual Corporate Headquarters parklet behind the sliver-coated tree. The artist named this work “Cleft,” which refers to his vision of life, intertwined through visible and invisible networks. Some might see the silver tree as reminiscent of a money tree.

This is a fine time to relax on one of many benches in the park to savor this colorful landscape display of flowers and shrubs in downtown Milwaukee.

Return to Prospect and walk north to Mason, turn west on Mason, and turn right or north on Jefferson. Continue on Jefferson to Cathedral Square Park where you will find “Immigrant Mother” close to the intersection of Jefferson and Wells Street. This statue of a mother and her children is “Dedicated to the valiant immigrant mothers.”

As you pass the playground, notice the sculptural designs of the playground equipment, artistic, colorful and creative. It’s art, designed to entice children’s participation and adults’ admiration.

Turn left on Kilbourn and look for “The Great Double” at MGIC Plaza. It stands over two stories high and dominates the plaza as well as the MGIC building. Its bark-like surface highlights the artist’s intent to merge this organic sculpture with the man-made construction surrounding it.

Continue west on Kilbourn to see “Trignon” adjacent to the Marcus Center for the Performing Arts. Its complex angles represent music, dance, and theater. Trignon is best viewed from a distance to appreciate its tangled composition.

Retrace the route east on Kilbourn to Cass. Turn left on Cass to return to start at Lyon. You have traversed some of the streets planned 150 years ago by Solomon Juneau and along the way viewed a dozen examples of Milwaukee’s public art. 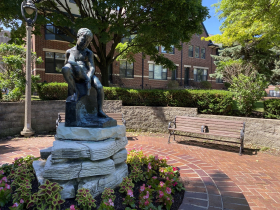 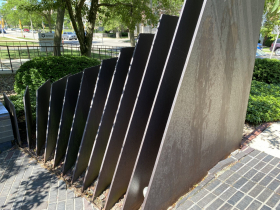 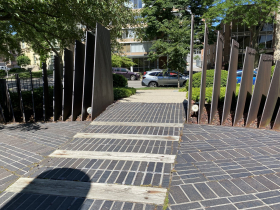 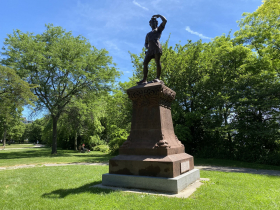 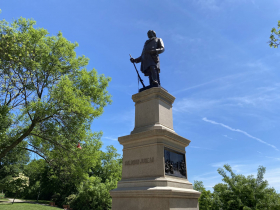 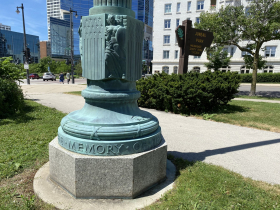