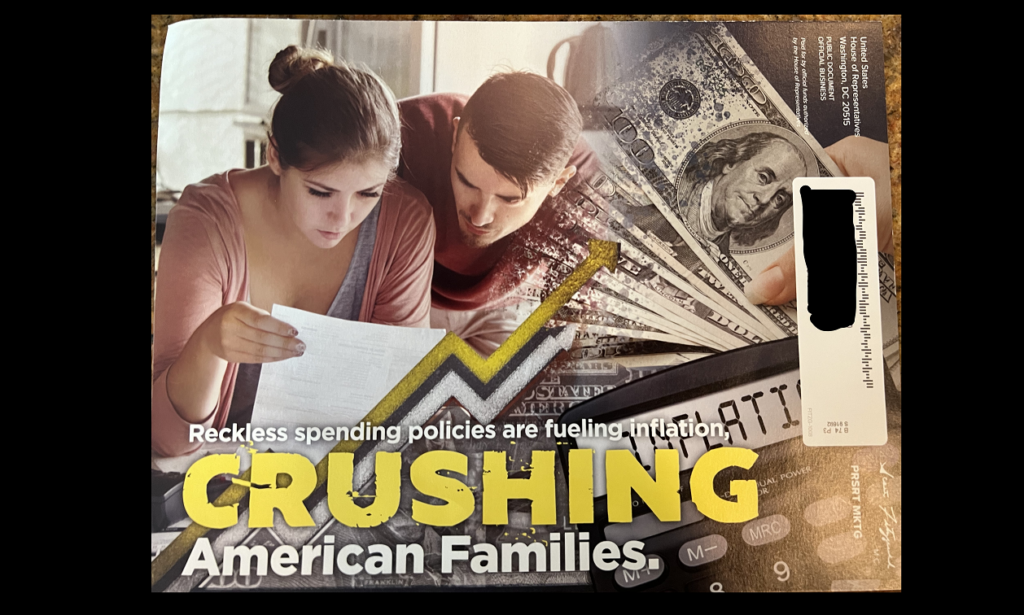 On one side of an oversize four-color card mailed to constituents in the 5th Congressional District, a color photo depicts a young couple bent over a kitchen table, their brows furrowed.

Bold letters emblazoned across the lower half of the image declare: “Reckless spending policies are fueling inflation, CRUSHING American families.” 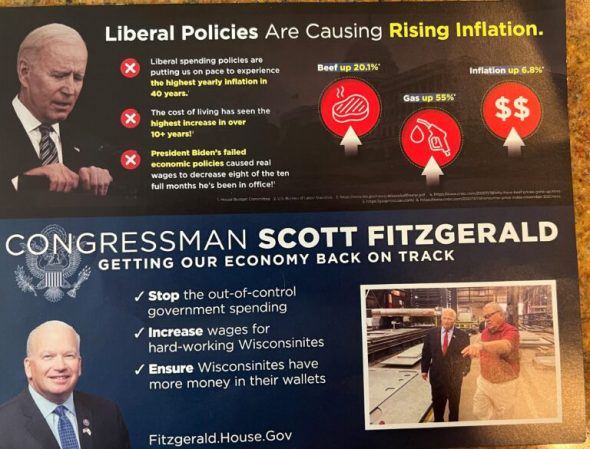 The reverse side of a constituent mailing from U.S. Rep. Scott Fitzgerald, photographed for an ethics complaint that was filed against Fitzgerald over the use of the taxpayer-funded mailing privilege for campaign messaging. Photo provided by Van Someren for Congress.

At the top of the other side, against a black background, is a photo of President Joe Biden, his face slightly downcast. “Liberal Policies Are Causing Rising Inflation,” the headline reads. Halfway down, the background changes to blue, and the picture is of a smiling 5th District U.S. Rep. Scott Fitzgerald. “Congressman Scott Fitzgerald,” is the headline. Below it: “Getting our economy back on track.”

The mailer was not sent from Fitzgerald’s reelection campaign.

Back on the first side is the statement, “Paid for by official funds authorized by the House of Representatives.” The mailer from Fitzgerald’s office was sent under the privilege available to every member of Congress, and to none of their challengers — allowing them to put their name and face in front of voters for the purpose of communicating with their constituents.

It’s called the “franking” privilege, and because of it, taxpayers pay the bill for the creation and distribution of these messages — not just by mail, but by email, digital ads, newspaper ads and robocalls.

“Basically all members of Congress send mail or flyers to their constituents to help ‘educate’ them about the member’s work,” said Aaron Scherb, legislative director for Common Cause. “It’s another advantage of incumbency that incumbents get to send mass communications to constituents on the taxpayer dime, whereas challengers have to spend campaign money” on the equivalent sort of mass communications.

In 2022, no Wisconsin U.S. House member has distributed taxpayer-supported messages to constituents more than Fitzgerald. A House database lists 66 such messages from his office so far this year.

Fitzgerald’s Democratic challenger, Mike Van Someren, charges that some of those messages were nothing more than campaign flyers for Fitzgerald’s reelection this year, and has assisted with a House Ethics complaint filed against Fitzgerald.

The complaint, filed Wednesday, Sept. 21, was also sent to the U.S. Department of Justice and the House Communications Standards Commission, which approves all taxpayer-funded communications from House members. The complaint identifies seven Fitzgerald mailers as ethical violations.

“These mailers are campaign material, intended to engender political support for Congressman Fitzgerald,” states the complaint, sent by Robert Hill of Brookfield, a resident of the Fifth District.

The Van Someren campaign announced the ethics complaint the day it was filed and posted links on the campaign website to the complaint and to a collection of Fitzgerald’s taxpayer-funded communications that the challenger’s campaign has compiled.

“Scott Fitzgerald hasn’t bothered to engage with the regular folks of the 5th Congressional District, and it turns out one reason he thinks he doesn’t need to is that he can just force us to fund his campaign,” Van Someren charged in a campaign email message.

Alex Crane, Fitzgerald’s congressional spokesman, said the ethics complaint was unwarranted. “Everything was approved [by the standards commission], and this is an untrue claim,” Crane told the Wisconsin Examiner on Friday.

The House Communications Standards Commission consists of six members of Congress, three from each party. It reviews all mass email messages and mailed flyers sent as House official business.

The commission also reviews robocall messages and newspaper, broadcast and digital ads that members send if they are paid for by government funds. Copies of each communication and the approval notice are published in a House database, accessible online.

Sachin Chheda, a political consultant working with the Van Someren campaign, said that simply being approved by the standards commission doesn’t absolve Fitzgerald of responsibility.

“Our view is that the House Communications Standards Commission review is not sufficient and doesn’t ensure that the pieces adhere to the [commission’s] own rules,” Chheda said Friday.

The ethics complaint against Fitzgerald quotes the commission standards:

“Through at least one newspaper ad and myriad taxpayer-funded mailers, Rep. Fitzgerald has abused the privilege of his office, violated these rules, and conducted a broad, expensive campaign for re-election using taxpayer funds,” the complaint states.

The newspaper ad referred to was published in the Waukesha Freeman. The ad copy was approved by the commission Aug. 16, 2022, “which we believe was paid for by taxpayer funds,” Chheda said.

The published ad lacked any kind of statement about who paid for it, which would be required whether it was paid for under the franking privilege or if it was a campaign ad. “So that’s a violation either way,” Chheda said.

The Van Someren campaign is not challenging any violation of the blackout rules. “As far as we can tell they were all sent within the proper period,” Chheda said of the mailings. “We’re not complaining about when they were sent — just the content.”

Along with the mailings that the complaint alleges violates the House standards, it also refers to four mailings “that we do NOT believe violate the rules, and that fit within the allowable purpose of taxpayer-funded franked mail,” the complaint states.

“The contrast between” those messages and the ones that the complaint charges violate the rules “is stark, evidencing Congressman Fitzgerald knew what the law was and chose to ignore it.”

Although the Biden inflation mailing carries the government-funded disclaimer, it is the one mailing among those the Van Someren campaign has collected that is not yet in the House Communications Standards Commission database as of Friday. The reason for its omission is not clear.

The Wisconsin Examiner downloaded the communications lists from the House commission database for all Wisconsin members of the House for 2022.

Fitzgerald has used the franking privilege 66 times in 2022 for mailings as well as taxpayer-funded digital ads and robocalls connected with telephone town halls.

“Starting this spring I’ve received about a dozen taxpayer-funded mailers from Rep. Scott Fitzgerald,” Carl Lock, a town of Brookfield resident, said in the Van Someren campaign’s press release. “Some weeks I’ve gotten as many as 2 or 3. They have mostly been political ads, paid for by taxpayer dollars. He should not be allowed to get away with this abuse of power.”

Fitzgerald’s output ties him with 1st District U.S. Rep. Bryan Steil (R-Janesville) as the most prolific user of the privilege in the Wisconsin House delegation. Steil — one of the three Republican representatives on the communications commission — also has had 66 taxpayer-subsidized communications so far this year.

Of Steil’s communications, just 24 required commission approval, however. The remaining 42 were email messages sent to a subscribed email list. Subscribed list messages are exempt from approval under the communications commission guidelines.

Among the Democrats, U.S. Rep. Gwen Moore of Milwaukee, in the 4th District, had just one communication in 2022 on record. Neither the 3rd District’s Ron Kind (D-La Crosse), who is leaving office at the end of this year, nor the 2nd District’s Mark Pocan (D-Black Earth), have produced any taxpayer-funded mass communications in 2022.

“We don’t send it,” said Pocan’s communications director, Matt Handverger. “It’s just expensive and it goes from the mailbox to the trash can.”

Pocan’s office did one mass mailing in 2021, its first in a decade, Handverger said, “just to remind folks that we do casework.”

Government funds don’t just cover the cost of postage for mailings, but also for printing the document. “And if you use a design firm, it’s all paid by the taxpayer,” Handverger said.

Going ‘right up to the line’

Nationally, the use of taxpayer-funded resources to send messages back home is widespread. “It’s very much a bipartisan practice” said Scherb, the Common Cause staffer, while some members make much more use of the perk than others.

The practice has been allowed in one form or another since before the American Revolution, except for a two-decade suspension in the late 19th century. It originally referred to the ability to send mail without postage, according to the Congressional Research Service. Members of Congress now have a budgeted amount for constituent communications as part of their budget for office staff and expenses.

Restrictions set by the communications commission are supposed to limit the size of the Congress member’s image or name on a mailing. There are also content guidelines, which require mailers to focus on policies or legislation.

“They can go right up to the line in many cases,” Scherb said, “and many members of Congress do.”

Attempts to overhaul the system have gotten little traction, however.

“The franking process certainly needs to be reformed,” Scherb said. “It’s kind of appalling that members of Congress can use taxpayer dollars to sell themselves to their constituents, whereas challengers have to pay for the same kind of communications.”

Both parties have little interest in advocating a serious crackdown, however, he added. “It’s hard to incentivize members of Congress who benefit from the system to take away their powers.”