78 truckloads of concrete for building's base. Developer exploring direct link to US Bank complex. 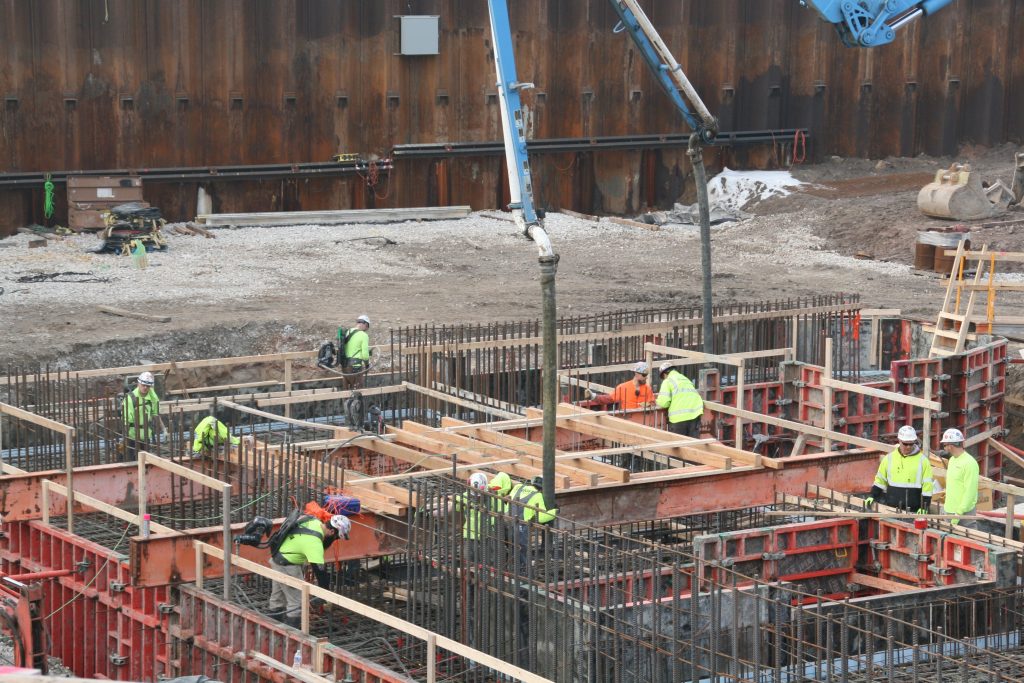 Concrete pour for The Couture. Photo by Jeramey Jannene.

A key construction milestone was reached Wednesday on The Couture, a 44-story apartment tower under construction at 909 E. Michigan St.

A concrete pour was initiated to support the tower. A nearly continuous pour from two pumps will last approximately six hours, supplied by 78 truckloads of concrete from Riv/Crete.

A crew of more than a dozen workers from J.H. Findorff & Son are working to build the “raft” at the base of the building. With 176,200 pounds of rebar and 2.8 million pounds of concrete, the raft sits atop 116 steel piles that can each hold 400 tons. The raft and piles will support the tower, which will start to peak above the construction fence this summer.

“It’s not just about Downtown,” but jobs, said Johnson. He noted the city’s Residents Preference Program will ensure that at least 40% of the project’s work hours are performed by unemployed or underemployed city residents. Barrett Lo Visionary Development is subject to the program because the city is providing $19.5 million for public infrastructure costs related to the project, including a transit concourse for the streetcar and bus rapid transit line.

There have been approximately 25 people on site daily in recent weeks, a long way from the hundreds expected to arrive later this year. The building is expected to take more than one million work hours to complete.

Get a daily rundown of the top stories on Urban Milwaukee
“What’s exciting is it’s going to ramp up another 100 guys in three weeks’ time,” said Barrett of the visibility of the construction work.

The developer is excited that people will be able to see the building at its peak height, planned to be approximately 517 feet, in a year.

“We are going to top off this building a year from today,” said Barrett, ever the optimist. Findorff senior project manager Eric Sadler said it wouldn’t happen until summer 2023.

Regardless of when it happens, Barrett is already looking past that. He said model units would be available in fall 2023 and the first residents could move in by “late 2023.”

The building wouldn’t be completely finished at that point. Instead, floors four through 19 would open for residents, with a temporary roof installed above the 19th floor to allow open-air work to continue above without impacting the residents below.

Barrett said 30 units are already pre-leased, largely towards the top of the building.

The base of the building, including the underground parking structure and three-story transit and retail concourse, will take longer to pour and form the concrete to be used. Then things will accelerate. “Floors five through 44 will have one floor every four days,” said Barrett.

The $190 million building will include 312 high-end apartments, approximately 45,000 square feet of retail space and 500 parking spaces.

Barrett didn’t have any news to share on the retail leasing Wednesday, other than to say discussions continue are ongoing. “We are working hard behind the scenes,” he said.

But there is a potential new amenity coming to the tower.

Skywalk To US Bank Center Complex

Following the resolution of an issue with a wall that separates the development from the adjacent 833 East office tower, Barrett is exploring a skywalk connection with Irgens‘ 18-story office building.

“Ideally, we are trying to do it elevated through a glass entrance,” said Barrett. “We would like to do it in a handsome way.”

The connection with 833 East would also provide direct access to the US Bank Center, The Westin Milwaukee hotel and a series of other nearby office buildings. People could walk from the transit concourse into any of the other buildings without having to step outside.

“It’s convenient for everyone entering the building,” said Barrett. “It connects parking we have that maybe could be helpful to other buildings in the area. It takes the weather, the rain and snow, all of that, out of the mix.”

A 13-foot-tall wall on the eastern edge of Irgens’ property was cited by Barrett as one of the factors that delayed The Couture’s construction progress. He said it was a remnant of the building Irgens replaced with its 2016 building and was sitting on the foundation site for The Couture. Irgens has previously expressed concern that additional development at The Couture site could negatively impact its building.

“Our relationship has really grown and maybe we can get something done,” said Barrett. “We are trying to figure that out right now.”

Barrett said he had difficulty sleeping because of the issues that could occur underground. And plenty did: the Irgens wall, We Energies equipment, a sewer relocation and other conditions were cited as causes of delay for the project.

“The predictability from this day forward we control and Findorff controls, and our subcontractors control,” said the developer. “When you have the unpredictability through the subsoil conditions, that’s always a really hard part and now we’re through that.” 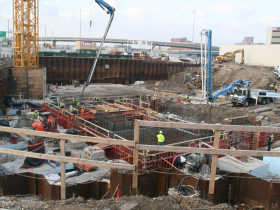 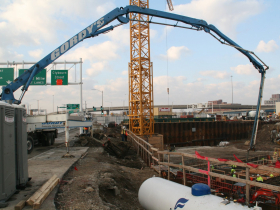 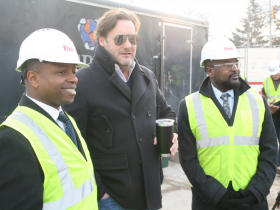 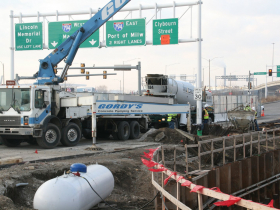 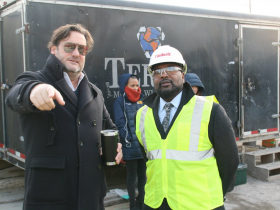 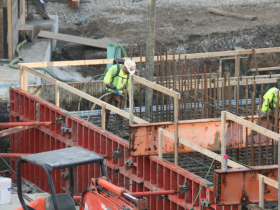