‘The Power of the Dog’ Bites Deep 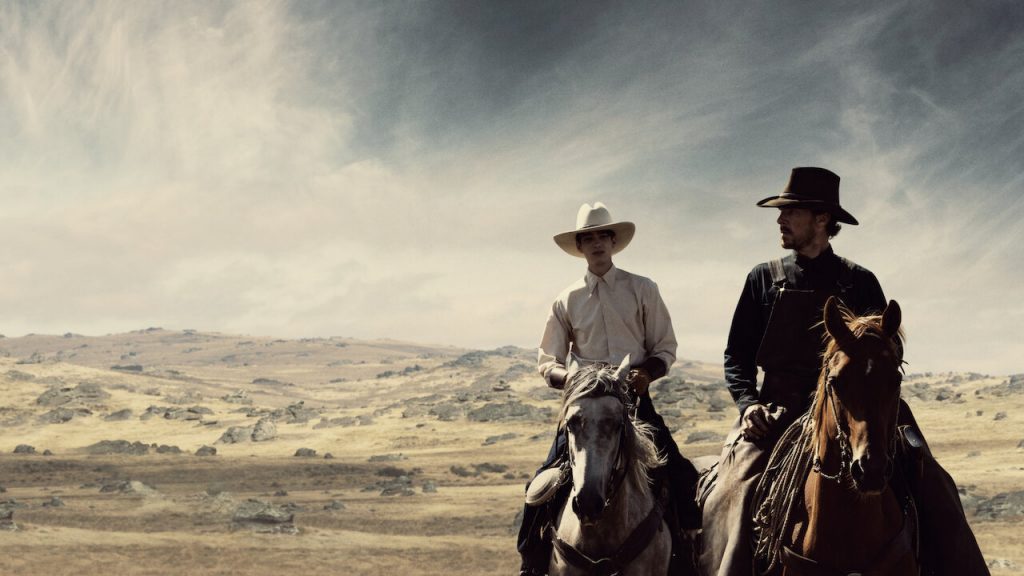 The Power of the Dog. Image from Netflix.

There are distinctly different kinds of movies competing for the top prizes like the Oscars.

There are the films fashioned along blockbuster lines in which even good actors are given dialogue that announces their intentions (often already revealed by their costumes). The directors use reams of audio sound effects and rapid cinematic cutting to signal the emotions the audience is supposed to feel. Sophisticated computer graphics imagery or CGI speaks volumes to the viewer. Promotional campaigns emphasize the visceral oomph behind the logos. These are not just Marvel films, but any large-scaled orchestrated enterprise.

The second category are the less obvious movies in which every framing of the content and the landscape reflect a purpose, in which the psychology of the characters and their almost-interaction can be so subtle that we have to pay attention to every line reading and every look, in which the tonal quality of the behavior and the nuances require us to expect meaning in every moment – in which, frankly, the director relies on our input.

(Some of today’s movies, such as The Last Duel, try to dance between the blockbuster style and the subtler one.)

Strangely many in the second category of films are only available through streaming, and hence not just in competition with the best of HBO but in competition with sitcoms, reality shows, serial dramas, and Madison Avenue methods that do not require careful attention and even are programmed so we can visit the refrigerator for refreshments while they unfold.  In home viewership, with many people spread around the couch after a hard day’s work, moviegoers have to give special attention to compensate.

An example of the subtler kind of movie is Jane Campion’s The Power of the Dog, now mainly available on Netflix. The New Zealand (now Australian) director brings a special sort of attention to her psychological tales and some viewers will assume automatically in the first minutes just who the top dog is at this remote and lucrative Montana cattle ranch in 1925 run by two vastly different brothers.

The obvious alpha dog is Phil Burbank, played by Benedict Cumberbatch as a muscular sarcastic hard-nose cowboy totally at home with boots, castration knives and banjo, literally wallowing in mud and bossing everyone around him with stern looks and harsh words. After 25 years he still calls his older brother George “fatso” though this fatso, as quietly and thoughtfully played by Jesse Plemons, stolidly walks through the punches unperturbed, sticking to his softer mannerisms and social concerns, willing to weather his brother’s scorn to court a neighboring widowed innkeeper, Rose. She is played in engaging suffering by Kirsten Dunst as so meek and fearful of Phil’s barbs that she takes to drink.

Rose has a college age son, Peter, so thin, awkward and effeminate that Phil immediately sees an easy target in Peter’s playing with paper flowers and dissecting animals as, he says, a preliminary to studying medicine. As naturalistically played by Kodi Smit-McPhee, there may be more will and determination within Peter than the dominating Phil realizes.

The evolving relationships among these corners unfold so slowly and deliberately that I suspect some viewers may not realize how much is being revealed, so conditioned have they become to movies that tell them how to think rather than trapping them into awareness.

Cumberbatch, already a star player in everything from Sherlock to Hamlet, is a pleasure to watch bending his highly trained British voice and talents to an American taciturn prototype, a deliberately nasty man who hides his intellect within a rustic legend of his own creation, one modeled after his late hero, Bronco Henry, the ultimate perfect cowboy in the Tom Mix vein who shaped him — in some strange shapes, as we slowly learn.

Cumberbatch submerges and refines his skills to totally capture Phil – making him a fierce physical presence as well as a Freudian puzzle, but expert students of his methods will note how exactly he has turned his vocal and sarcastic talents to fit a different mold. I for one could not subdue knowledge of Cumberbatch’s techniques though I had a lot of fun watching how he did it.

I was more impressed – Oscar level impressed, in fact – by Plemons’ unpretentious but touching work as the brother, of Dunst’s skill at making us grip Rose’s fear as well as her clinging niceness and particularly by how well Smit-McPhee lets Peter’s personality creep up on us, and I do mean creep.

All of this is made possible by director Campion’s care and trust in her actors and in letting the subtleties unfold at what many may see as a stately pace as she commits to the place and the tempo of the story.

This is billed in some quarters as a western, but only if films like Hud are westerns, only if we recognize that Campion is saying something different about the milieu of the Old West and our attitudes about those times. Something else is going on as the cowboys skin hides and bathe in the creek with Stetsons strategically placed over their X-rated parts. There are power plays underway, but don’t presume to know who the top dog is in a movie too easy to overlook at awards time. Just don’t overlook it now.

One thought on “Oscar Films: ‘The Power of the Dog’ Bites Deep”