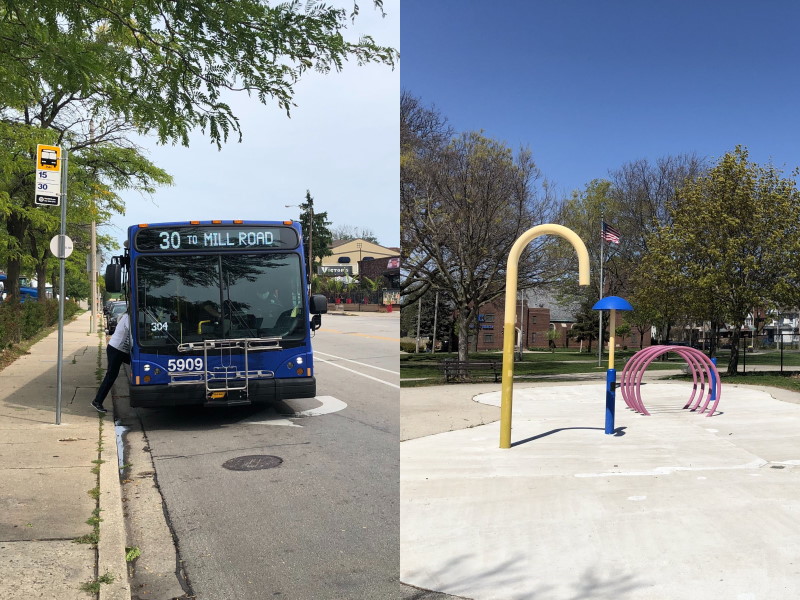 In April of 2018 newly elected Supervisor Sylvia Ortiz-Velez was stunned by what she encountered in the Milwaukee County government. “I had no idea that we were in such financial trouble,” she says. “A lot of trouble.”

A major contributor to the problem, she soon learned, was the cost of the county’s pension system. “We have no control over the pension we have inherited and it just keeps getting higher and higher. It’s frustrating.”

The county contribution to the pension plan in 2021 was $74 million, plus another $33.4 million to repay pension obligation bonds issued beginning in 2009. That’s $107.4, or more than a third of the entire county property tax levy for that year, to pay for pension benefits. That’s about $94 million more than the average annual contribution back in the 1990s, before the notorious 2000-01 pension plan added lucrative benefits that have helped drive up those costs.

The nationally unique design of the pension plan has cost taxpayers nearly $600 million through 2020, and may cost another $740 million over the next two decades, as Urban Milwaukee estimated in Part I of this series. That has left much less to spend on county services like the parks and bus system, and on maintaining and replacing county buildings, buses and highways.

The county parks system was declining even prior to the 2000-2001 pension plan, as the total staff dropped from 1,195 full-time equivalent (FTE) positions in 1985 to 802 in 2002, as a recent Wisconsin Policy Forum (WPF) report noted. But the decline has been more drastic since then. By 2020, the parks were down to just 450 FTE positions as detailed in a column by Jeremy Lucas, Director of Administration & Planning at Milwaukee County Parks. If Milwaukee were staffed at the national median level for park systems, it would have an additional 300 employees, he noted.

Get a daily rundown of the top stories on Urban Milwaukee
But that’s just the operating budget. The parks capital budget has been even more underfunded. The WPF has estimated that the parks system’s total infrastructure repair backlog may exceed $300 million. “Almost every form of parks infrastructure has pressing needs,” the group noted. “Assets that the county should replace within the next 10 years included 85% of parking lots and service yards, 75% of walkways, 73% of parkways, 54% of rated Oak Leaf Trail segments and basketball courts, 48% of tennis courts, and 47% of large buildings.”

The county has also been underspending on other capital projects and has 12 buildings that are in poor condition and have passed their dates “when replacement should be considered,” another WPF report found. The total replacement value for these buildings is more than $225 million.

Another county service that has suffered is the Milwaukee County Transit System (MCTS). In 1987 and again in 1999, it was selected as the best transit system in the nation by the American Public Transportation Association. MCTS reached its highest point in 1990 with more than 56 million revenue passengers and in 1999, peaked again at 54 million. But after the county pension plan was passed, the decline began. Elected officials annually “made decisions to slice service, raise fares or both every year since 2001, transit officials said,” as the Journal Sentinel reported in 2011. From 2001 to 2010, bus service hours were reduced by 22 percent and the cash fare increased by 50 percent, an MCTS report noted.

And that hurt ridership, which plummeted by 25 percent, dropping from 52.8 million in 2000 to 39.4 million rides in 2009. Most of this occurred on Milwaukee County Executive Scott Walker’s watch, who oversaw the elimination of 13 routes and reductions in 27 routes. Ridership dropped again in 2010 by 4.75%, dropping from 39.4 million to 37.5 million. Both figures were the lowest since the county took over the system from a private company in 1975. After a few years of stability under Chris Abele, who succeeded Walker as county executive in 2011, ridership declined nearly 15% in 2016, a bigger drop than in any any other urban area in the nation.

In 2016 Milwaukee County implemented a $30 vehicle registration fee or “wheel tax,” dedicating a major portion of the proceeds to MCTS. This helped increase local tax funding, which had declined in real dollars in many of the years after 2000, but not by nearly enough. In 2019, nearly 3 percent of MCTS’s routes were reduced. And the system also faces a huge problem from years of inadequate spending on the replacement of buses. As Urban Milwaukee reported in July, MCTS estimates it will need to replace 233 buses by 2024. At a cost of about half a million dollars per bus, “the county is looking at approximately $117 million in bus purchases that need to be made in the next three years,” Graham Kilmer reported.

Over the past decade, the county has eliminated more than 1,000 jobs, and cut back its office spaces and facilities by three million square feet, Urban Milwaukee has reported. The county may also have problems keeping up with the maintenance of county highways it is responsible for, the WPF noted.

The county’s financial problems could eventually force it to liquidate assets, the WPF warned, including the possible “closure and/or downsizing of entire parks or cultural facilities.” It could be forced to sell entire parks. The costs of the pension are a major contributor to this situation, the group noted.

But it’s important to note that there is another major contributor to the county’s disastrous financial situation: a steady reduction in state funding. Counties in Wisconsin operate as the local administrators of state programs for which the state provides funding. In 2010 Milwaukee County got a total of $156.5 million from the state in four categories: for general transportation, basic community aids, mass transit and shared revenue. By 2012 that total had dropped to about $132 million and it remained at about that level every year after that. In real un-inflated dollars, that was a total loss of about $455 million through 2021.

In 2018, Abele and then-County Board chair Theo Lipscomb announced an effort to push for a Fair Deal from the state, hoping to lobby the Legislature to increase its funding. The effort not only didn’t budge state officials, but county funding from the state in 2022 will hit a new low of just over $100 million, down some $90 million in real dollars from what it was a decade ago, and increasing the total loss in state funding since 2010 to $545 million.

Abele and Lipscomb warned that county government was not sustainable long-term given this squeeze in state funding. The county faces an ever growing structural deficit that by 2027 would require it to spend 100% of its revenue on state mandated services, as Urban Milwaukee has reported. This would leave not a single dollar to spend on local services like transit, parks, senior services and public safety, as County Executive David Crowley told the county board’s finance committee in May.

In a statement for this story, Crowley outlined the situation county leaders face: “Irresponsible decisions made by county leaders decades ago, with the addition of state-imposed funding limits and the growing weight of state-mandated services, have created a perfect fiscal storm that we’ve inherited at Milwaukee County. The result is each year we start our budget process with figuring out how to close a structural budget gap instead of focusing on making investments that will best help residents.”

Few of today’s county officials were serving back when the 2000-01 pension plan was passed. Former County Executive F. Thomas Ament and key members of his administration all were forced resign. Just two of the 18 members of the current county board, John Weishan, Jr. (who supported the entire pension package) and Willie Johnson, Jr. (who supported it only for union employees), voted on the plan. County Executive Crowley was 14 years old and Board Chair Marcelia Nicholson was 12 when the plan passed. Yet all have inherited a massive financial problem that won’t go away until the late 2030s at the soonest.

“There is a critical need to increase funding for Milwaukee County,” Crowley says. He hopes the state Legislature will consider allowing the county to increase the local sales tax. A 1% increase, he notes, “would mean we can close the gap for good and reverse the trend of planning for cuts and instead plan for investments. We can utilize our local dollars for local priorities such as mental health, transit, senior services, and maintain valuable assets such as the zoo, and parks.”

Which is something the county really hasn’t been able to do since it passed that infamous pension plan.