How Can Milwaukee Save Its Parks?

By Edgar Mendez, Milwaukee Neighborhood News Service - Dec 9th, 2021 11:46 am
Get a daily rundown of the top stories on Urban Milwaukee 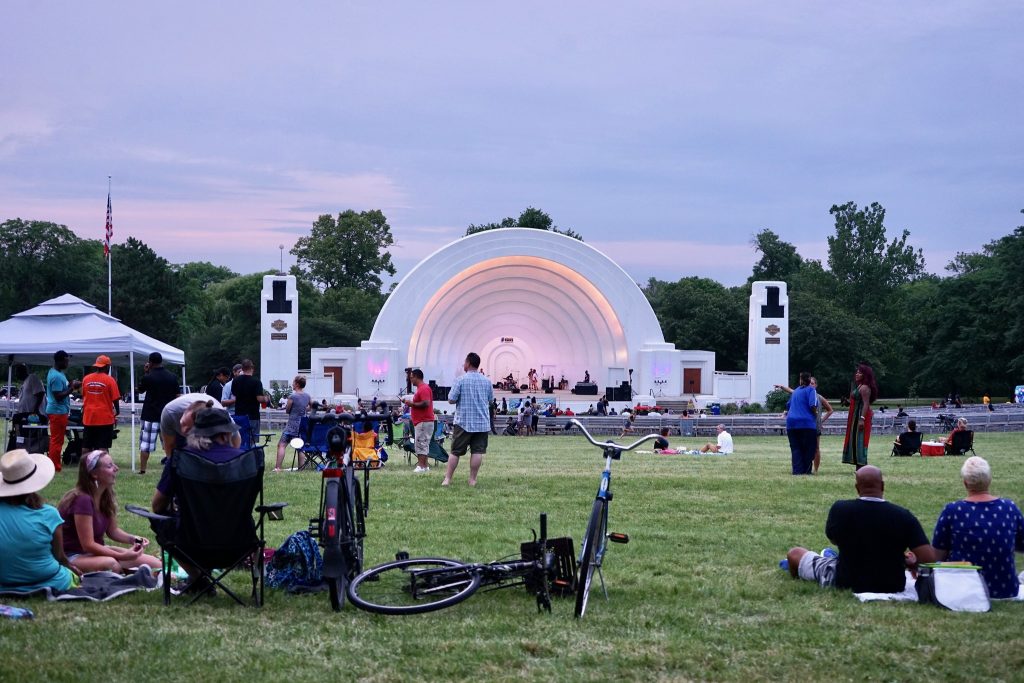 Milwaukee County Parks, which allocated more than $700,000 to restore the Washington Park Bandshell (pictured here) in 2016, still has $500 million in deferred maintenance projects to complete. File photo by Adam Carr/NNS.

It’s no secret the Milwaukee County Parks is in financial trouble.

And unless there are major changes, things are expected to get much worse. The situation is so dire that Milwaukee County Executive David Crowley said the costs of county salaries and fringe benefits could force the elimination of property tax levies as a funding option for the parks system by 2027.

Losing those levies, which provide 43 percent of the budget for the parks system, could force officials to dismantle the system, according to a recent report from the Wisconsin Policy Forum, a nonpartisan policy research organization.

But there are options that could help change that grim outlook, lessons gained from peer park systems around the country, said Rob Henken, one of the authors of the report and president of the Wisconsin Policy Forum.

One of them is to create or expand partnerships with other organizations and share costs.

For example, he said, the Milwaukee Metropolitan Sewerage District, or MMSD, already partners with the parks on flood control and other water preservation activities on park lands. “There might be a better opportunity to maintain its clean water and flood water approach that also results in MMSD paying for some of the maintenance,” Henken said.

Other potential partners mentioned in the report include nonprofit groups and school recreation departments.

“We do partnerships all the time with the public and private sector,” including Milwaukee Recreation and several other districts, said Guy Smith, executive director of Milwaukee County Parks, in an interview with NNS.

The power of partnerships

Working with others, Smith said, provides access to new funds and the ability to combine services, something other county departments have also done more of in recent years. He said his department has worked with other groups since the pandemic began to provide personal protective equipment, bicycles, food and other resources during events at more than a dozen parks.

The report also recommends transferring maintenance and other responsibilities for neighborhood parks to municipalities and segregating revenue-generating amenities, such as golf courses, boat rides and the Boerner Botanical Gardens, so they pay for themselves.

The challenge with that option is that many of the park’s amenities, including the Mitchell Park Domes, don’t generate a profit.

The Domes “is a very valuable amenity, but it’s not paying for itself,” Smith acknowledged. “We have to look at what’s possible and what’s not, and what’s the potential for tax credits and other funding models.”

What wouldn’t be ideal, according to Henken, is for attractions such as The Domes to raise their prices to the point that they become inaccessible to the broader community. He added that not every single revenue-generating entity needs to pay for itself.

“Collectively they have to make money,” he said. “Golf courses can potentially help support attractions like The Domes.”

Bill Lynch, chairman of the Mitchell Park Domes Task Force, said the plan his group supported in 2019 would have made The Domes and other proposed amenities at the park self-sustainable.

“The plans for Mitchell Park have the potential to support 300 jobs if fully implemented,” Lynch said.

Another option laid out in the report is to segregate The Domes and other regional attractions such as the Boerner Botanical Gardens into distinct organizational units and finance them separately.

Other options, according to the report, include creating a park district to collect funds and accompanying that with a fiscal control board to set ceilings on spending. In addition, the state could consider authorizing a new property or sales tax or a dedicated property or sales tax that is shared with municipalities.

Local officials have pressed state lawmakers for years to eliminate the mechanism that prevents Milwaukee, at both the city and county levels, from levying income and sales taxes.

“There’s been a significant effort that has continued with county, city and state officials on that front,” Smith said. “With that being said, it’s still going to be a tough lift.”

He said one thing working in the park system’s favor is that more people, after weathering the pandemic, see the value that parks provide, and they don’t want those treasures to be lost.

It’s a point not lost on Henken.

“I don’t think there’s any question that if the goal of policymakers is to maintain a first-class public park system with great public access, having some form of dedicated funding is needed so that the parks are no longer forced to compete with all other government functions for property tax money,” he said.

Smith, who said his department is reviewing the report while also collecting feedback from community stakeholders, remains upbeat about the future of Milwaukee County Parks.

“We’re looking at things that we can do to not just survive, but to thrive,” he said.

How the financially troubled Milwaukee County Parks system can bounce back was originally published by the Milwaukee Neighborhood News Service.

One thought on “How Can Milwaukee Save Its Parks?”