But none have majority Latino voting age populations today. Will Barrett veto? 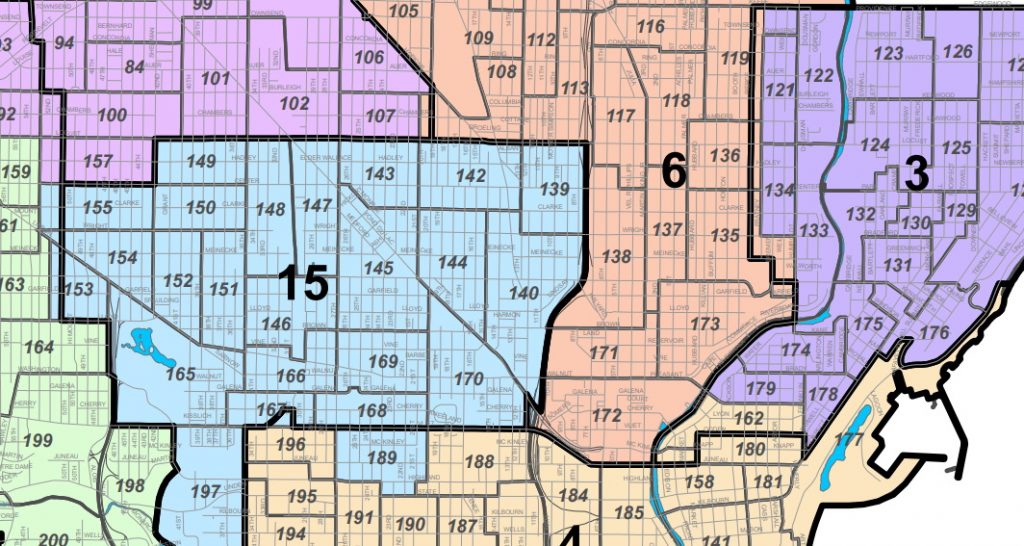 The clock is running out, but Voces de la Frontera isn’t giving up the fight.

Barrett has until Monday at the close of business to issue a veto. A spokesperson previously said he is reviewing his options.

The Common Council adopted its final map on Nov. 23 on a 14-1 vote, concluding its portion of a “warp speed” process created by delays at the federal, state and county level. Only Alderwoman JoCasta Zamarripa voted against the final map. In an interview after the vote, she expressed concern with Latino representation and the lack of alternatives considered.

“Last year, Voces de la Frontera actively worked during a pandemic and under a hostile administration to encourage Latinxs to participate in the census so that new districts would reflect the importance of Milwaukee’s growing Latinx community for the next ten years,” said Voces executive director Christine Neumann-Ortiz in a statement. “The maps we are proposing clearly recognize the scale, movement and growth of the Latinx community in Milwaukee. We call upon Mayor Barrett to veto the map approved by the Common Council last week, which needlessly split the Latinx voter population into Aldermanic districts 11, 13, and 14 rather than attempting to combine the Latinx majority on the farther south side.”

Get a daily rundown of the top stories on Urban Milwaukee
The city’s Legislative Reference Bureau, which created the council-approved map, said its map was drawn to comply with the federal Voting Rights Act and that efforts were also made to keep neighborhoods together by following major streets, rivers and other barriers. The smallest and largest districts must not be more than 10% different in size.

Zamarripa, in an interview after her vote, and Ald. Scott Spiker, who represents the district Voces wishes to redraw into a Hispanic majority, both acknowledged the difficulty in creating a third Hispanic-majority district without diluting existing Hispanic-majority districts or drawing irregularly-shaped districts. Voces in its first suggested map produced two long, narrow southeast side districts instead of the more rounded shapes that currently exist.

But working with UW-Milwaukee professor and districting board game creator Matt Petering, Voces has expanded its one suggestion to nine. Each would include three districts with Hispanic majorities or near majorities, but the third district in each scenario would not be a voting age majority which the Voting Rights Act uses as the definition for a racial majority. The influence of the Hispanic vote under any scenario could be further diluted by current disparities in Milwaukee in turnout between Hispanic and white voters.

Voces’ original proposal was focused on creating a third majority Hispanic district over the course of the decade. The Hispanic population in the 13th district, and the city as a whole, has grown steadily. Spiker, before a committee vote, acknowledged that even without any changes the council could possibly see a third majority Hispanic district in a decade.

The council adopted a new ward map on Nov. 17 which will impact where and with whom residents vote beginning with the spring 2022 elections. Any new district map also needs to follow the lines set forth by the wards. Barrett signed the ward map into law.

The terms Latino, Latinx and Hispanic were used interchangeably in this piece to represent the comments of a speaker or the wording of a document.