But city program to keep renters in their neighborhoods by setting aside new apartments is growing. 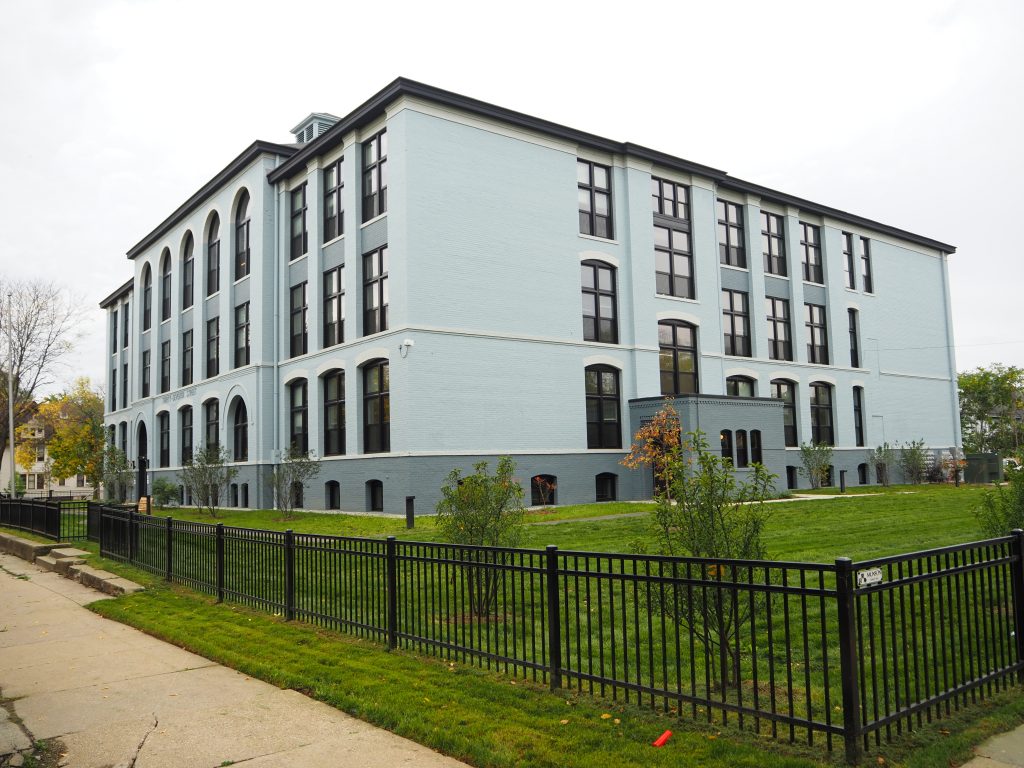 The City of Milwaukee adopted an anti-displacement policy in 2019 for new development in targeted neighborhoods, but the first buildings subject to the policy only opened this fall.

Forty rental units across three developments are subject to the policy, but only two of those developments have been completed: THIRTEEN31 Place and 37th Street School. Ribbon cutting ceremonies were held for both developments in October. A third project, ThriveOn King, has seen its groundbreaking delayed for more than a year.

The policy requires that 20% of any affordable units in any development that received city financial assistance be set aside for at least 30 days for priority leasing by neighborhood residents.

“The demand for units is very high, they usually have long waiting lists” said Department of City Development planning manager Sam Leichtling of the existing demand for affordable units. He presented a report on the policy to the Zoning, Neighborhoods & Development Committee on November 16.

But the anti-displacement policy only applies to select areas.

“Preference policies across the country are very complex,” said the planning manager. To create the city policy, statistical testing by ZIP code was done to determine there would not be a disparate impact based on race or national origin. A disparate impact analysis was created and published. Leichtling credited DCD graduate intern Isabel Gunderson for completing much of that analysis.

It applies to new city-supported affordable housing developments in the 53204, 53208, 53212 and 53233 ZIP codes where a statistical analysis determined residents were at risk of displacement. “Basically the areas just north, west and south of Downtown,” said Leichtling. But the boundaries actually stretch much further, north to the city limits, west to the Wauwatosa border and south to W. Becher St.

Get a daily rundown of the top stories on Urban Milwaukee
Leichtling said ZIP codes were used rather than smaller census tracts or neighborhoods because they are racially diverse enough not to fail a disparity test. Census tracts of overwhelmingly one race would fail standards identified in the federal Fair Housing Act. “ZIP codes aligned the best, at least locally,” he said.

“We have done a number of things to advance that goal,” said Leichtling. He said DCD has increasingly backed the use of tax incremental financing to fill financing gaps in affordable housing proposals.

Known formally as the “Anti-Displacement Neighborhood Preference Policy,” the policy effectively piggybacks on other affordable housing efforts. It is intended to complement the existing low-income housing tax credit program and its per-project duration lasts as long as the underlying affordable housing financing mechanism.

“The individuals benefitting from the projects are still going to have to be low-income individuals,” said Leichtling. “It’s not like a wealthy household is going to benefit.”

Without publicly identifying the projects, Leichtling said five additional projects are in the pipeline with 284 total units, 55 of which would be set aside through the policy.

“I think we are really proud in the two and a half years since this policy was created… you now have eight projects moving forward,” said Leichtling.

A pilot phase was scheduled to last through the end of 2021. The Common Council reauthorized the program on a permanent basis on November 23. The policy is sponsored by council members Russell W. Stamper, II, Jose G. Perez and Milele A. Coggs.

The new policy requires DCD to report on its progress by the end of 2023 and conduct a new disparity analysis. Affected developments are also required to report on their leasing progress.