Offering no evidence of fraud, legislator would cancel the ballots of every voter in the state.

Why in his grandstanding press release calling for cancellation of the Wisconsin presidential election outcome did State Sen. Timothy Ramthun, a Republican from Campbellsport, not offer a single incident of actual voter fraud in his district?

Nothing. Nada. Not a shred of hard evidence. 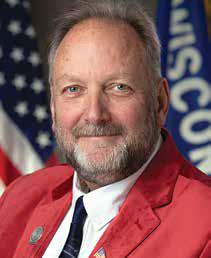 He cites “concerns” of a majority of Wisconsin citizens. What poll is he talking about? I haven’t seen one that backs him up.

What does the fuzzy word “concerns” mean anyway? I am “concerned” about all kinds of things that don’t rise to the level of drastic legislation as a solution.

The 2020 Trump-Biden election has undergone more scrutiny than any other Wisconsin presidential vote. The list of investigations in the courts, recounts and beyond have found no hard evidence of any fraudulent effect on the outcome.

There were some minor mistakes and some cases of bad judgment, like letting Mark Zuckerberg’s people into polling stations in Green Bay that should never have happened, but no material change in the ballot counts surfaced.

Ramthun postures himself a patriotic defender of “our sacred right to vote.” It is a sacred right. But what would be the impact of his proposed legislation? It would, in effect, cancel my sacred vote on Nov. 3, 2020 – and yours, too.

What would he do with my vote and yours that determined Wisconsin’s 10 electoral votes? Would he turn the state’s decision over to the Wisconsin Legislature? To him and his GOP majority instead of Wisconsin citizens?

For the record, I don’t want him taking over my vote or anyone else’s.

In his provocative news release, Ramthun offered “every office” the opportunity to see all the evidence he used to make the claim “on request.”

How about “my office?” I would love to see the “evidence” that previous investigations didn’t find convincing. I will turn over any new material that looks real to the Daily News to make it public, which Ramthun didn’t do.

Note that Ramthun has received almost no support from other legislators. Indeed, Rep. Jim Steineke, Senate majority leader, immediately slapped down Ramthun’s windbaggery as a violation of legislative rules.

Right in character, former President Donald Trump egged on Ramthun. His affection was probably what Ramthun was looking for all along.

The former president will never admit that he is one of history’s biggest losers, but some Republicans still genuflect in front of him.

It’s time for Americans to move forward from the safe and secure 2020 election to the 2022 elections. Can we please put a big wooden stake in the Big Lie?