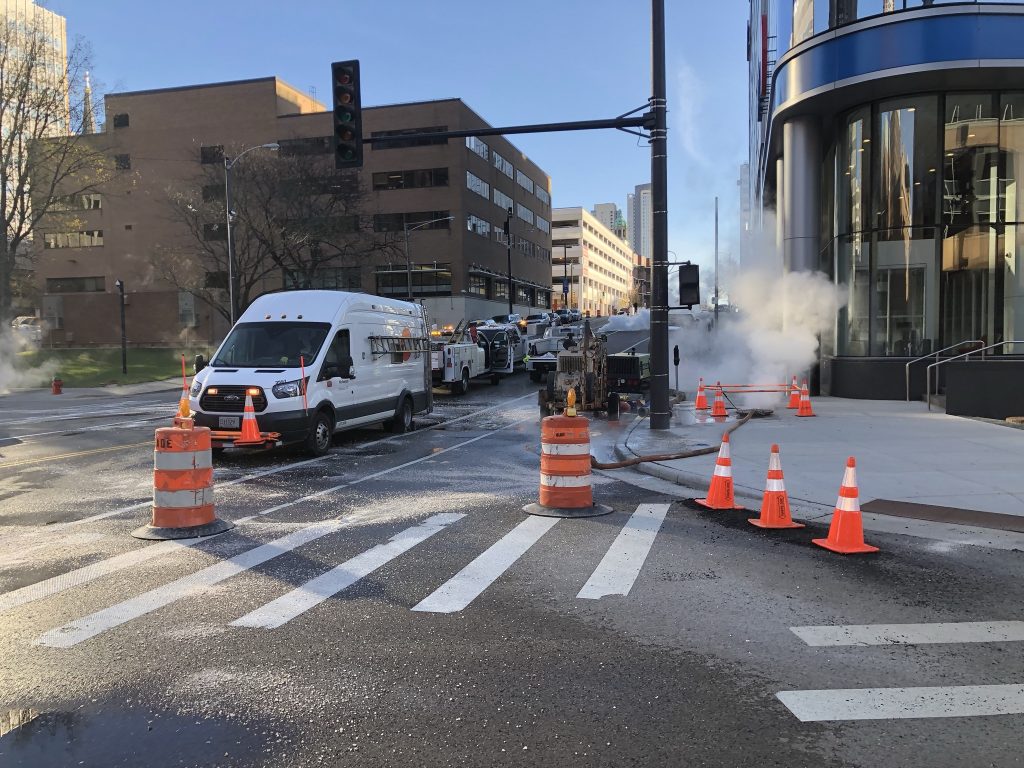 An overnight water main break near E. Wisconsin Ave. and N. Broadway sent millions of gallons of water pouring into We Energies‘ steam tunnel system. The steam heat, which runs through pipes at temperatures of up to 400 degrees in the tunnel system, quickly caused the water to boil.

That boiling water became steam and is escaping through the many in-street manhole covers that grant access to the system. The steam emerging from the ground at many downtown intersections is not a leak from the high-pressure pipes, but instead fast heating water that broke into the otherwise dry tunnel system.

“For safety reasons we shut down a portion of our steam system early this morning. Customers east of the Milwaukee River currently have low or no steam service,” said We Energies media relations manager Brendan Conway in an email to Urban Milwaukee. “The city of Milwaukee has isolated their water main break and we are pumping millions of gallons of water out of our system. Once we clear the water, we will inspect the steam tunnels and our equipment and start to restore service. We should have an estimate on that later tonight.”

The Milwaukee Water Works (MWW) confirmed that the break was “fairly deep” and involved a water main originally laid in 1884. MWW could not offer a specific reason for the break at the time of publication. The city-owned utility estimates two million gallons of water leaked out.

Electrical and natural gas service are not impacted.

Customers, primarily in office buildings and downtown apartments, use the system to heat their buildings as well as to create hot water and other practical uses (at least one downtown athletic club used it to heat a sauna until recently). Steam runs through the walkable tunnels in high-pressure pipes. The steam originally came from waste heat from the coal-powered Valley Power Plant, but the plant was converted to burning natural gas in 2015.

Get a daily rundown of the top stories on Urban Milwaukee
The steam system serves buildings in an area bounded by Pleasant Street, Mitchell Street, Lake Michigan and Interstate 43. An extension serves part of Marquette University‘s campus.

The flood comes as We Energies still hasn’t finished cleaning up damage from the last time a similar problem occurred. On May 18, 2020 the system flooded following a significant rainstorm. The company reported an access shaft at N. 2nd St. and W. Clybourn St. was shooting boiling water up to 35 feet in the air during the flood.

A number of Westown buildings were deluged with water during the storm, either from the tunnel system or other sources, including the Riverside Theater in the Empire Building, the 310W office building and the Bradley Symphony Center. But the biggest victim, by chance, was We Energies’ headquarters, the Public Service Building. Steam ended up being released in large volumes on all four floors. Repair work is still underway on the Beaux-Arts-style office building, 231 W. Michigan St.

UPDATE Wednesday, 6:55 a.m.: “Our crews worked through the night to restore service; however, regrettably we discovered damage to a critical part of our network,” says Conway. “Urgent repair work is underway. We now expect full restoration of service to customers by early evening. We appreciate the patience of our customers as we work quickly and safely to address this issue.” 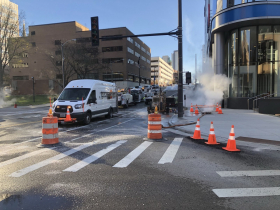 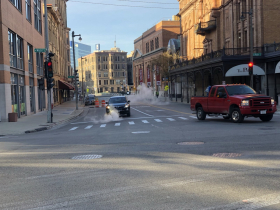 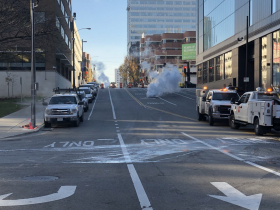 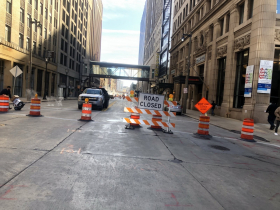 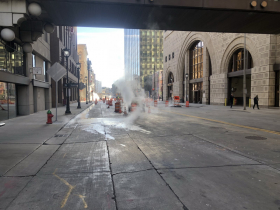 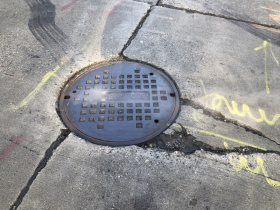