The Council’s War With Tearman Spencer 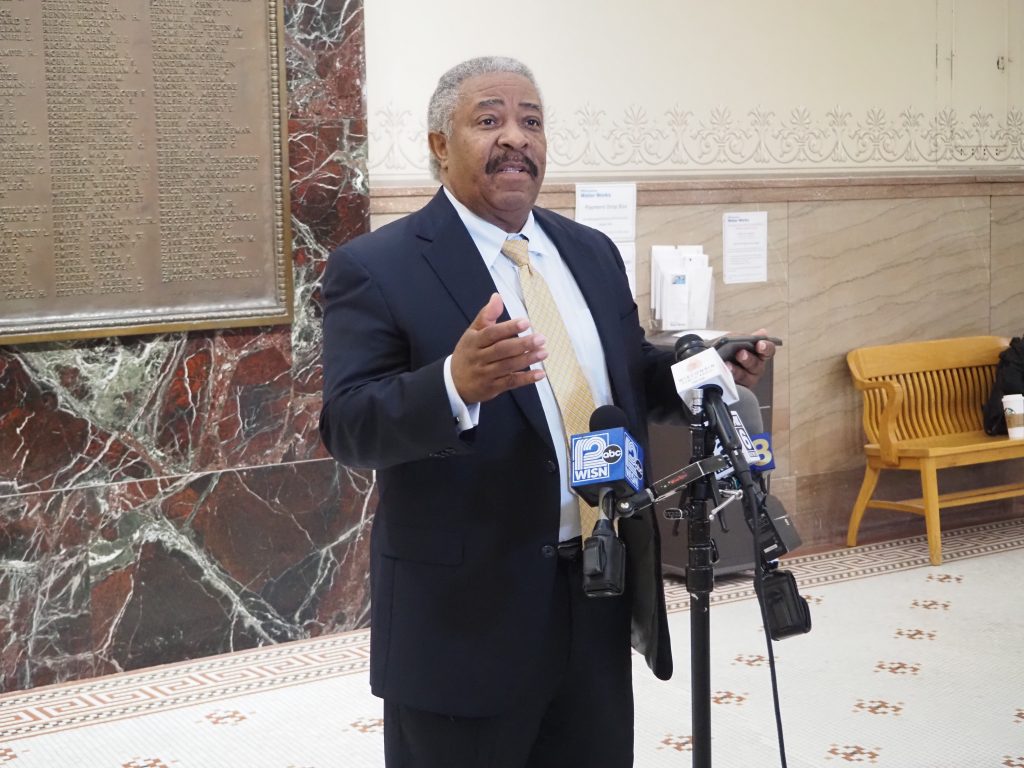 City Attorney Tearman Spencer wasn’t in the Milwaukee Common Council chamber Tuesday morning, but he was certainly at the center of discussions. And despite the council’s complaints about how Spencer is running his office, he picked up “wins” on two three agenda items.

The 2022 budget included a provision that would have stripped Spencer of some of his power.

An amendment would have eliminated one of 35 assistant city attorney positions in Spencer’s office and created a new attorney post in the council-controlled City Clerk‘s Office. But Mayor Tom Barrett vetoed the proposal on Nov. 15 and, over the objections of the majority of the council, got his way Tuesday.

“The change proposed in the Council’s amendment does not improve the quality, depth, or coordination or legal services for the City,” wrote the mayor in his veto letter. “The amendment also puts the City’s Charter at odds with State law.”

Alderman Robert Bauman called Barrett’s argument “rank hypocrisy” and said the Barrett administration did what the council wants to do when it previously created a “real estate compliance liaison officer” position within the Department of City Development. Deputy city attorney Mary Schanning was hired for the role and told a council committee last week that she’s performing work she would have done in her prior role.

Bauman, referencing Schanning’s earlier affirmation, noted that includes providing authentication signatures, something only an attorney can do. “So yes, she is practicing law,” he said.

A Barrett spokesperson previously said there was a distinction, Schanning wasn’t practicing law and the council was proposing to do just that with its own attorney position.

But Bauman and amendment sponsor Ald. Jose G. Perez said the council attorney would not represent the council in court, and instead, just give the members advice and operate similar to Schanning’s support of DCD. “We no longer get that guidance, the council essentially has no lawyer,” said Bauman.

Spencer, first elected in April 2020, has claimed that one of the leading reasons he is having challenges is people aren’t accepting of a new Black leader at City Hall and that harassment claims against him are “unfounded.” The City Attorney’s Office is seeing sustained, high turnover including employees that Spencer hired leaving. It recently hired an individual that worked for an anti-Muslim group. Spencer, meanwhile, is now blaming the media for his issues.

Get a daily rundown of the top stories on Urban Milwaukee
New city human resources director, Makda Fessahaye, who is Black, refuted Spencer’s harassment innocence claim and said the harassment investigation of Spencer she oversaw stopped because of the limits on the policy. “We did, however, find that his actions were inappropriate and unbecoming of his position as the City Attorney,” she said in April.

Yet the council has frequently voted along racial lines when it comes to Spencer. And that’s what happened Tuesday.

The original council attorney budget amendment was adopted on a 9-4 vote. But overriding Barrett’s veto failed on an 8-7 vote, short of the 10 votes needed for a veto override. Council President Cavalier Johnson, who votes last, switched to opposing the change, but didn’t speak on the matter. Alderwoman Milele A. Coggs went from abstaining to voting no, and Ald. Khalif Rainey, who was excused from the original budget vote, voted no.

Coggs, Ald. Russell W. Stamper, II and Ald. Ashanti Hamilton led the opposition to overriding Barrett’s veto. Coggs raised concerns about the position description and associated costs for legal subscriptions. Stamper said it could lead to a scenario where the City Attorney and council’s counsel are at odds.

“If I could just cut to the chase because I understand the frustration my colleagues have with trying to get things done for the city of Milwaukee,” said Hamilton. “The reality is that there are so many legal needs that the council would have that would draw on the expertise of this person, that there is no possible way a single person could do this.”

“It’s an impossible task to put on one person and I’m not ready to give up my team of attorneys I have an entire office for,” he said. “I would prefer to keep my City Attorney’s Office. I would prefer to work to fix the problems that exist there.”

“That same argument, if applied to the council, would apply to the Department of City Development,” said Bauman. “The City Attorney’s Office will still represent the city and the council, particularly in litigation matters.”

Coggs noted that Schanning’s position wasn’t created by eliminating a position. It relies on funding from the Redevelopment Authority of the City of Milwaukee. Bauman said he would have been open to funding the new position from the property tax levy, but members wanted it to be cost neutral.

“If we had this person in house a year ago we wouldn’t have had to spend $50,000 to represent the council against the city attorney for The Couture matter,” said Bauman. Spencer previously refused to sign a council-revised development agreement for The Couture and accused Bauman of an ethical violation for negotiating with the development team. The council agreed to a compromise with Spencer, where the City Attorney signed the agreement in exchange for the city spending up to $100,000 to determine who was right. Attorney Michael Maistelman was the lone respondent to a $50,000 request for proposals to serve as a special counsel for the council. The council also authorized up to $50,000 to hire retired judge Chuck Kahn to serve as the arbitrator.

As a result of The Couture disagreement , the council passed a resolution in July that stripped Spencer of his mandatory review of any contract valued at $25,000 or more. Barrett vetoed that resolution and cited concerns about future ethics issues, but the council unanimously overrode that veto. On Tuesday the mayor was successful in defending Spencer’s authority. But that wasn’t the end of the debate.

While the council failed to create its own attorney position, it did create a pathway to hire its own special counsel in the future. But not without more drama from Spencer’s office.

A charter amendment was required to allow the counsel to hire a special counsel, with Perez routing that proposal through the Judiciary & Legislation Committee. But as of the start of Tuesday’s meeting, Spencer’s office had failed to return the required signature affirming that the proposal had been reviewed and was legal and enforceable.

“What does that mean, they are just ignoring their duty basically?” asked Bauman.

“And they’ve done none of those three items, so they’ve basically stonewalled a legislative body in the city of Milwaukee,” said Bauman.

But Owczarski said he received an email from the office that said they thought they had sent it in, but hadn’t. It was the only item missed.

In a Nov. 15 letter to the committee, Spencer previously argued that the proposal, then viewed jointly as the in-house attorney and related charter amendment, went “far beyond” what state law envisioned. But on Tuesday his office ultimately signed off on the charter amendment as legal and enforceable.

The council adopted the measure unanimously, effectively ratifying into law what it did in hiring Maistelman to represent it against Spencer. It now has a clear pathway to hire its own special attorneys, though it doesn’t have the authorization to hire an in-house attorney.

In the ongoing war between Spencer and the council, the battles aren’t limited to direct conflicts.

The revelation that Cade Law Group exceeded its authorized budget by nearly 50% in serving as the city’s outside counsel on the Alfonso Morales‘ lawsuit and that the City Attorney’s Office knew that would happen resulted in a committee recommending the city not pay for the overage.

But after saber-rattling, the council voted 11-4 to pay the bill.

Deputy City Attorney Robin Pederson told the Judiciary & Legislation Committee on Nov. 15 that the City Attorney’s Office was aware Cade was likely to go over its cap in July.

Spencer secured council approval in April to hire Cade with an authorized maximum of $40,000. The council approved a $627,000 settlement with the former police chief in July. But the City Attorney’s Office returned in November for authorization to pay Cade up to $18,726.63 more and said that the firm already completed approximately $16,000 worth of additional work.

“Wouldn’t it have been appropriate to bring that to this committee?” asked Bauman.

“Yeah, I can concur and acknowledge up front that that is the case,” said Pederson. “I think it is just a matter of things moving very quickly and that the amount was not to be excessively high and the focus was to be on getting the settlement done.”

“I can appreciate that the matter did not come back before the council and I don’t think I have anything I can offer that is a good excuse and for me it’s a lesson learned,” said Spencer’s special deputy and chief of staff Celia Jackson. She joined the department after Cade was hired.

The committee voted 3-2 to recommend not paying the bill.

But on Tuesday, Hamilton moved that the city ignore the recommendation and pay Cade.

“I think it’s important for us to acknowledge that this bill is due, that we should pay this bill and then deal with the issue with the City Attorney’s Office,” he said. “Simply not paying the bill is not an option.”

One thought on “City Hall: The Council’s War With Tearman Spencer”