Brown Bottle is Historic, Yet Updated

Classic atmosphere and a new menu with some dishes we loved, others not so much. 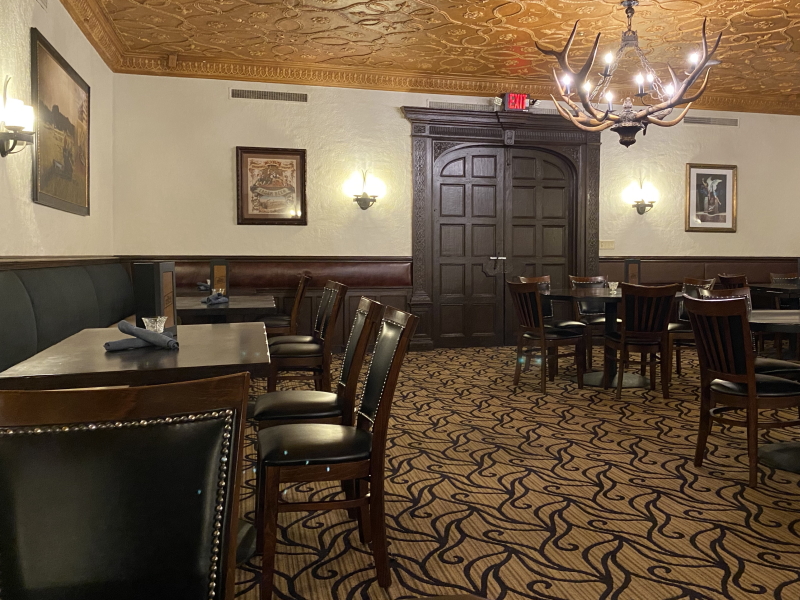 Today, we have the new improved Brown Bottle with a new menu and a delightful patio currently operated by F Street Hospitality, the group that owns the Pizza Man restaurants and Bottle House 42.

Our lunch on the patio on a summer day was a delight. The patio borders a pristine grassy area surrounded by blooming flower beds and further enhanced by a lovely view of Milwaukee’s skyline, a calm oasis in the middle of the city.

We began our al fresco lunch with selections from the Small Plates, each an interesting twist on the familiar. The Crispy Brussels Sprouts lived up to “crispy,” especially the leaves from the sprouts scattered on the plate. Both sweet from a honey marinade and salty from bits of cashew, they were tasty and played well with the mild roasted shishito peppers.

Our other Small Plate, also a sharable, was Fried Bread Cheese topped with sweet Serrano tomato jam. Crisp slices of leek added color and flavor to this attractive plate of semi-melted cheese. It was more than a pretty plate; it was a rave from my companion and me.

From the Friday Fish Fry, cod or perch, baked or battered, we shared Schlitz beer battered perch. The batter hinted of beer and flavored each bite. The same could be said for the potato pancakes with their crisp crust surrounding smooth (almost like mashed) potatoes. House-made applesauce and a tart kohlrabi slaw finished the plate, an all-around impressive Friday Fish Fry.

The Focaccia Caprese was slightly less successful, only because the toasted bun wasn’t focaccia as advertised. I never thought it was possible to have too much cheese in a sandwich, but thick-sliced fresh mozzarella in this sandwich proved me wrong. It came with fries and a house-made pickle. In place of the fries, I switched to the heart-healthy Caesar Salad for an up-charge of $3.00, a mistake. The addition of shaved brussels sprouts didn’t help the salad’s bland dressing and oddly, instead of traditional croutons, there was a crusty crostini lightly brushed with olive oil and seated on top of the salad.

On my second visit we ate in the dining room where there were no obvious changes in the décor since the days of the original Brown Bottle. The antler chandeliers still hung over the tables; the bar with its dark wood still welcomed customers; the main dining room was still carpeted; and the carved wooden door with the ornate metal latch still required muscle to open.

At the time, we were the only diners in the large dining room. Despite the empty room, our server was attentive and provided excellent service.

The Grilled Peach Salad with its miso vinaigrette tended toward bland. Salty guanciale and ricotta salata added interest but were lost among oversized pieces of bibb lettuce that required a knife. The addition of Grilled Salmon would have been a good pairing with the miso vinaigrette.

My companion’s Turkey-Hummus Wrap turned out to be more like a salad in a spinach wrap than a meat and hummus wrap. It was mainly vegetables packed in the wrap, without much turkey, hummus, or cheese. That said, it was a healthy wrap, with plenty of flavor from the veggies. The accompanying fries more than made up for the missing turkey and hummus. They were unique, tempura-like, puffy, crunchy, and soft inside.

Also on the menu were several Large Plates, a couple of which harken back to an earlier time when a Heritage Bone Pork Chop or Steak Frites with Heritage Angus New York Strip would have been common choices for diners at the original Brown Bottle. Hanger Steak with chimichurri, Pan-Roasted Salmon with creamy polenta, and Scallops with Sweet Corn Succotash rounded out the large Plates. For vegetarians there was Cavatappi pasta with 5-cheese sauce and a Fried Potato crust.

Desserts included Peach Cobbler with Salted Caramel Ice Cream or Panna Cotta with Luxarado Cherries and Brandy, traditional desserts updated for 2021, and appropriate in a restaurant that’s been around since 1838. 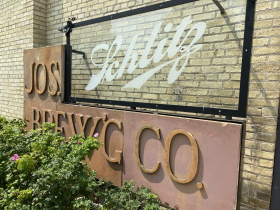 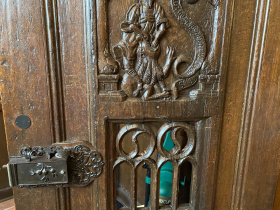 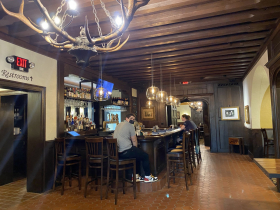 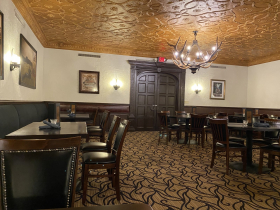 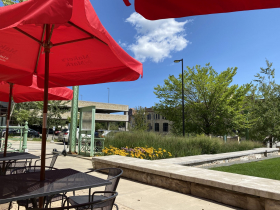 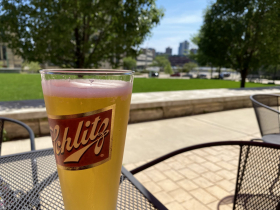 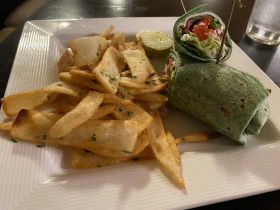 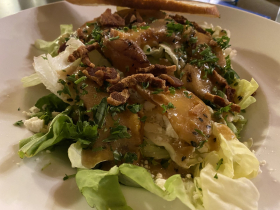 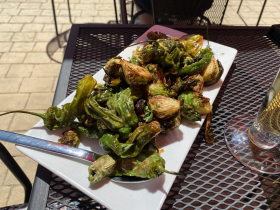 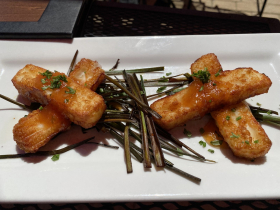