Plus: a taco and a mac n' cheese restaurant are opening in the same location, and a new Mediterranean restaurant joins the Mayfair Collection. 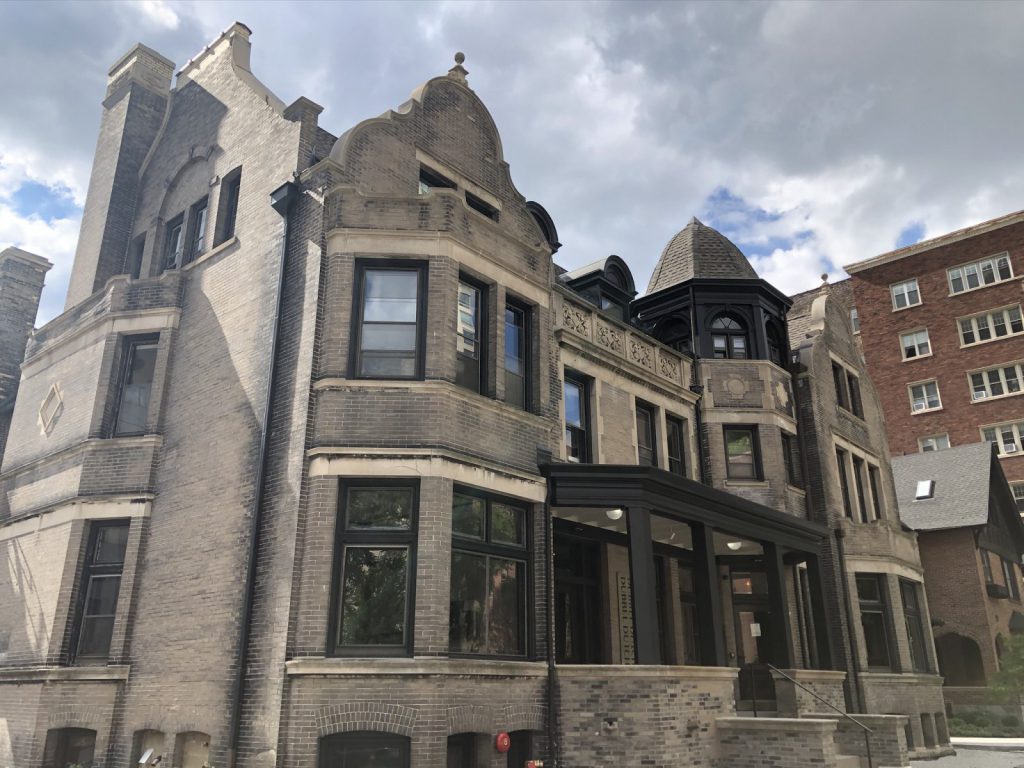 The new cafe will replace The Daily Bird, which also operates a pop-up cafe out of Centro Cafe at 808 E. Center St. in Riverwest. The owners of The Daily Bird will instead focus on their pop-up.

Space Time Coffee will officially open on Oct. 20. Its owner Adam Sterr has created a cafe with an aesthetic inspired by his love of low-budget, macabre sci-fi films. He told the Milwaukee Journal-Sentinel, “If Morticia Addams and Ed Wood decided to form a coffee company with the cast of ‘Young Frankenstein,’ that’s kind of where my tastes lie.” Carol Deptolla reports:

Space Time will brew pourover coffees and make espresso drinks such as lattes and cortados, from its own roasted beans, and most of the half-dozen or so syrups for flavoring drinks, such as vanilla bean, will be made by Space Time.

The cafe also will serve tea by Rishi and sell bakery items by Matilda Bakehouse, another business that started in the pandemic. Customers can expect to find baked goods such as cinnamon knots, chocolate croissants and other morning pastries.

The marijuana-themed sandwich chop Cheba Hut will soon be getting some new neighbors. A dual-concept restaurant offering both tacos and mac ‘n’ cheese will open at 2911 N. Oakland Ave. in the space formerly occupied by Good Land Wing Co. The two new restaurants, Juana Taco and Makk’n’Cheese, will feature their own separate menus but share an aesthetic and decor that represents both. This will mark the second location for Makk’n’Cheese, which opened its first in Bay View last year. Juana Taco is a concept that had an untimely opening in the Crossroads Collective food hall in 2019, closing just months after due to the pandemic. Maredithe Meyer reports:

(Co-owner Marcos) Ramos-Garcia said plans for the new restaurant have been well received by Heather Gawlitta and Robert Huhn, who own Cheba Hut next door. Since moving in, the couple has made an effort to improve the curb appeal of their busy corner at the intersection of North Oakland Avenue and East Locust Street.

The property now features a newly paved parking lot and an enclosed outdoor patio that was popular amongst local diners over the summer. The ongoing revitalization of the block was a draw for KRS Hospitality, said Ramos-Garcia.

Inside the restaurant space, both concepts will utilize one kitchen, and customers will place orders at one counter with a central POS system. Juana Taco and Makk’n’Cheese will offer in-house seating, carryout and delivery.

A new Mediterranean restaurant with an emphasis on seafood has plans to open this fall at The Mayfair Collective. Adriatic Fresh Seafood & Steak will take over the former Cafe Grace space at 11200 W. Burleigh St. sometime this fall.

The restaurant aims to bring affordable seafood to the area, keeping price points around $30 an entree. Guests can expect a variety of fish as well as shellfish, lobster, crab legs and freshly-shucked oysters. And it wouldn’t be a seafood restaurant in Wisconsin without a fish fry featuring battered cod and the expected sides. And there’s more than just seafood available at Adriatic. Lori Fredrich reports:

For guests who would prefer options other than seafood, Adriatic Fresh will also offer a menu of pasta dishes featuring various ingredients and three types of sauces: a red tomato-based sauce, a cream sauce and an olive oil based sauce. Ingredients will include both extra virgin olive oil and items like feta cheese which are sourced from Southern Albania.

A small menu of steaks – including popular cuts like filet, New York strip and ribeye – will also be available, with all meats wet-aged for a minimum of 45 days.

Siliu says the restaurant will have licensure for beer and wine only. He expects the wine collection to start off at about 100 bottles with a focus on primarily California wines. But he says he hopes to bring on a few Mediterranean selections, including wine from Northern Macedonia and potentially Albania.

Colectivo Coffee’s Prospect Ave. location, which also houses the Pabst and Colectivo collaborative event space The Back Room, has officially reopened. The cafe closed in January, with hopes of reopening in the spring. At the time, owners chalked it up to some cafes suffering more than others during the pandemic, but suggested that the closures will be temporary. The Back Room continued to host shows during the cafe’s hiatus. Jeramey Jannene reports:

“We’re SO excited to be back and open for business. Please stop by and say hi,” said the company in Facebook and Instagram posts.

Colectivo, which operates 12 cafes in the Milwaukee area, closed and opened a number of cafes during the pandemic. It closed its Historic Third Ward cafe in November, but reopened it in June. Others, including those in Riverwest and Wauwatosa, closed early in the pandemic, but reopened by April 2020 with mobile ordering, contactless pickup and curbside service.

It’s an interesting year for the coffee roasting company as it comes off of a recent unionization effort, resulting in a success in August. Read more about that here.

Brothers Sal and David Safina, who currently operate cocktail lounge The Sofie, have applied for a license to open a full-service restaurant, cocktail lounge and nightclub. The nightclub is called The Bodega and it’s taking over the space previously occupied by District on Water. Annie Mattea reports:

The business would also provide entertainment including bands, comedy acts, disc jockeys, magic shows and more, according to the license application.

The business plans to accommodate 50 to 75 guests per day, but has a capacity of 300.