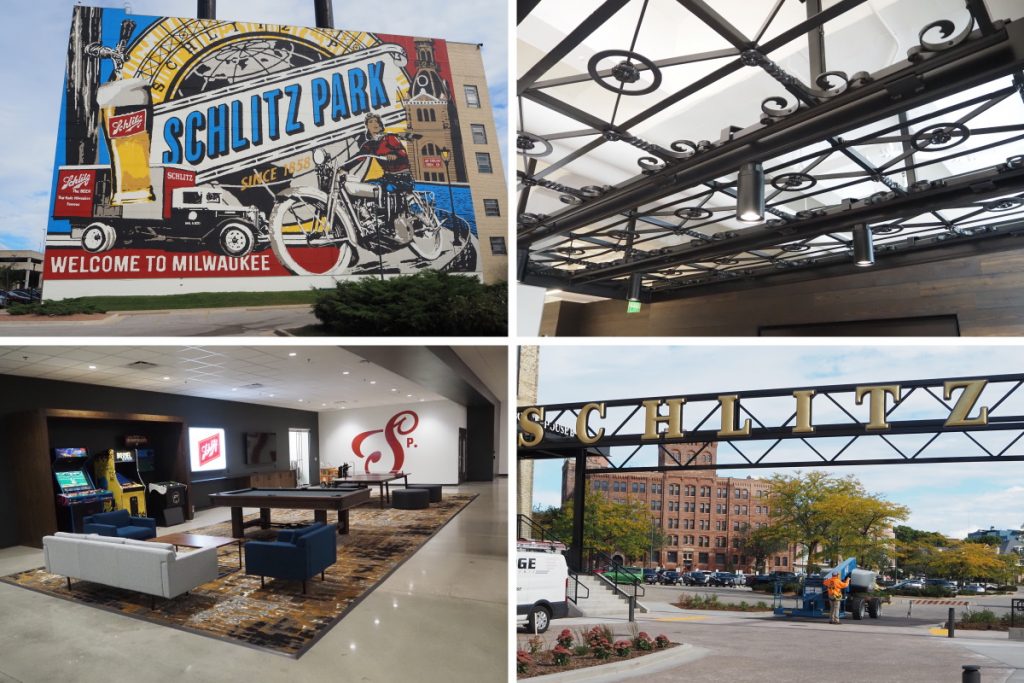 A partnership of Crestlight Capital and TPG Real Estate purchased the 32-acre campus in 2019 for $110 million and announced a rehabilitation plan in 2020. The partners are now nearly finished with what they consider a “first phase” redevelopment.

“One of our biggest goals is to create more connectivity throughout the campus,” said Crestlight CEO John Coury during a tour Thursday morning. “It really was five separate buildings.”

In total there is 775,000 square feet of office space at Schlitz Park that is owned by the partners. And when the adjacent ManpowerGroup headquarters and other former Joseph Schlitz Brewing Company buildings are considered, that total far exceeds one million square feet. But an array of surface parking lots and a sizable hill cause each of the buildings to feel like an island.

The $5.7 million improvement project aims to connect the buildings the partners own, and ultimately to better integrate the former brewery campus with the neighborhood. A new mural, downtown’s largest, was painted on the southern-facing wall of the Power House building by Greg Gossel. The artist was selected from 28 applicants, and the final design reflects a mix of Schlitz and Milwaukee history.

“I can’t tell you how many people stop here on a daily basis,” said Colliers International broker Mike Wanezek. He said he’ll be giving tours only to encounter tourists who were drawn to the mural. Crestlight is responding by adding a pocket park in front of the mural.

Behind the mural is what is intended to be the signature new amenity called Crossroads Plaza. it will be a new space built atop what was a sloped alley between the Rivercenter and Bottlehouse B buildings, is intended to become a central gathering space for the entire neighborhood. “In 2022 I think that’s going to be a big focus,” said Wanezek. Pavers were installed to delineate the area, and a new pedestrian bridge helps make the area more accessible for those in the Rivercenter Building. A new entrance was added to the Bottlehouse building, encouraging tenants to access the plaza and walk to the Rivercenter Building.

Get a daily rundown of the top stories on Urban Milwaukee
The signature item is likely to be the large SCHLITZ letters that were kept in storage for three decades. They once hung above a street between buildings, similar to the Pabst letters that hang above W. Juneau Ave. They’re now installed on a trellis that hangs above the plaza and will be backlit, harkening back to the day when the neighborhood was dominated by brewing giants.

Tenants will find plenty of reason to walk across the plaza to the Rivercenter Building. The 508,000-square-foot building was built in 1948 as a distribution center for Schlitz, and its back door that faces the plaza was one of dozens of loading docks in the building. It was left that way when the complex was repurposed as office space in the 1980s. But no more, now it’s a tenant lounge with video games, televisions, billiards, couches and a number of Schlitz artifacts, including a four-panel painting of the brewery that hung in the gift shop, a table embedded with a “Malt House” sign from a demolished building and a number of classic Schlitz signs.

“We basically blew it all up and opened it,” said Coury.

The hallways in the building were gutted as well, removing a lot of beige drywall and 1980s-era fixtures in favor of exposed concrete floors, white walls and wood accent panels. “They wanted to make it feel like the suburbs,” said Coury of the prior design aesthetic.  The redesign leans into brewery’s history, with large historical images, two interior murals by Gossel and ornate railings from the demolished Brew House.

The tenants will also be able to walk through the building to a new cafe operated by F Street Group. The hospitality company also relaunched The Brown Bottle restaurant earlier this year at the western edge of the campus. “Kept a lot of the charm, but added a lot of fantastic food,” said Wazenek.

The Bottlehouse B building, and the attached Bottlehouse A building, also received the “blew it all up and opened it” treatment. In addition to the new door facing the plaza, drop ceilings in common spaces were removed. “The ceiling height was half of what it is now,” said Coury, with a bit of hyperbole. A heavy amount of Schlitz imagery was brought into the space and the original vaulted ceilings, which include alterations to accommodate specific pieces of equipment, were exposed.

The Stock House building, redeveloped in 2014, also saw its common spaces upgraded, albeit less drastically. Railings from the former Brew House were interconnected to create a new light fixture in the lobby and other historical elements were exposed.

The Keg House, which is 100% leased, is also receiving upgrades. RINKA is leading the design work on all of the projects.

The complex has a whole is 93% leased, up 1% from what the partners reported in 2020. Tenants include UMB Fund Services, the Milwaukee Bucks, AECOM, Badger Liquor and HSA Bank.

What comes next for the campus? The partners are finalizing plans to honor Gary Grunau and Scott Sampson, who redeveloped the complex into office space after the brewery closed in 1982. The former Brew House site now includes a sign that says “Sampson Square.” Grunau, a civic power broker who passed away in 2019, will be honored at a different site.

Work will start soon on the pocket park. “Start small and see where it goes,” says Crestlight vice president Kelly Lim of the plan. Fitness centers in the complex will also be upgraded.

But the big question remains: what to do with all the surface parking lots? There are plenty of empty spaces today, as Courey estimates only 20% of employees are back to working in the office. But Coury said no redevelopment plans are imminent. “We have been approached,” he said, noting multiple developers have reached out. Much of the street frontage along W. Pleasant St. is surface parking, as is the space just beyond the riverwalk. 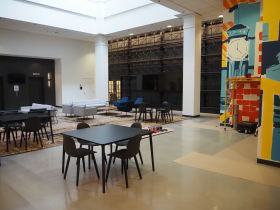 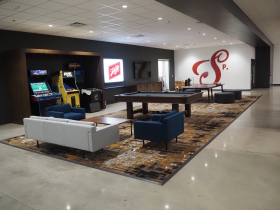 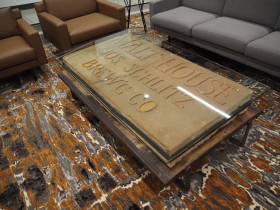 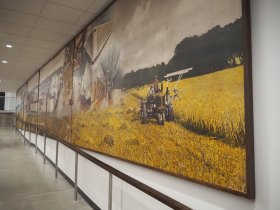 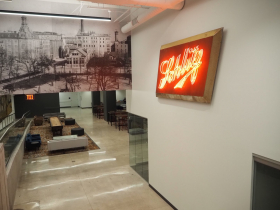 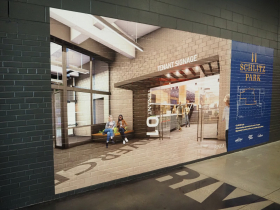