It’s The Final Weekend for Summerfest

Plus, Harborfest returns, a boat parade, a theater production in Humboldt Park, an arts event and auction and the return of the Shamrock Shuffle. 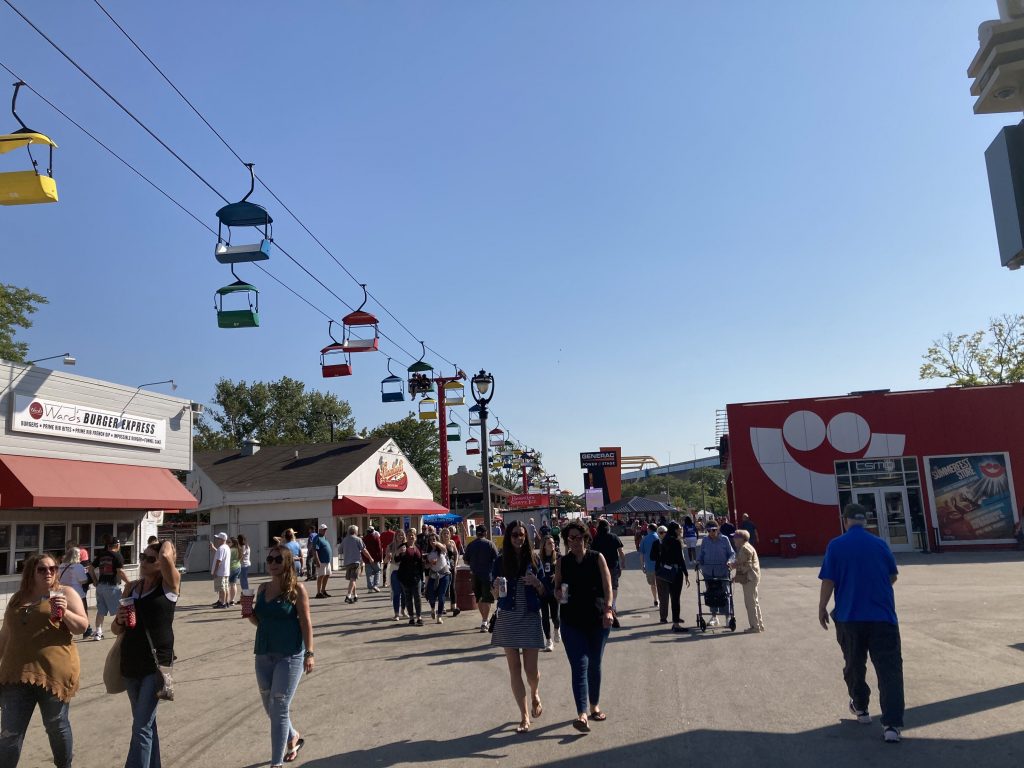 It’s looking like Downtown will see quite a bit of hustle-and-bustle this weekend with the final weekend of Summerfest coinciding with this year’s delayed Shamrock Shuffle. And while there’s plenty of chances to catch live music and drink beer during those events, there’s also some great educational opportunities this weekend. Harbor Fest 2021 and the Riverkeeper Boat Parade are family-friendly experiences that highlight our city’s waterways. Looking to spend some money on art? Check out the Fifth Annual WMSE Art & Music event, where an auction will sell off hundreds of pieces created by local artists.

WMSE is celebrating the fifth rendition of its annual WMSE Art & Music event, an auction-based event that features more than 200 album-sized boards created by both local and nationally-recognized artists. The auction will play out to the backdrop of live music by the organ trio B3 as well as WMSE DJs spinning records. Great Lakes Distillery will be on deck slinging cocktails, and food trucks Flour Girl & Flame, Riley’s Good Dogs and Twisted Plants will provide tasty snacks. And if all that isn’t enough to spark your interest, the event will also feature live painters and multimedia art installations. The event will take place at the Pritzlaff Building. For more information or to purchase tickets, click here.

Summerfest isn’t the only event making up for lost time by taking place later in the year than usual. The Shamrock Shuffle is back, instead celebrating the half-way point to St. Paddy’s Day. The 12th year of the shuffle will, as usual, take place along Old World Third Street, Brady Street, Water Street/Downtown, Cathedral Square and Walker’s Point. Tickets to the event are still available by visiting this website.

September 18: Daikaiju, The Eradicator, Roboman and Dislocation at X-Ray Arcade

Looking for some live music that isn’t on the Summerfest grounds? Daikaiju, a band based out of Texas and the Pacific Northwest, is bringing its high energy, Japanese-theater-inspired performance to Milwaukee’s X-Ray Arcade. The band is known for its unique blend of surf-rock, punk, metal and psych-rock, as well as occasionally setting their instruments on fire. Daikaiju shows are frequently referred to as “attacks’ on the cities they play in. It’s a tongue in cheek allusion to the giant monsters of Japanese film that terrorize cities, and for which the band is named. X-Ray Arcade requires either proof of vaccination or a negative COVID-19 test for entry. Tickets are $12 in advance or $15 at the door. The show starts at 7:30 p.m. Click here for more information.

Harbor Fest, an event that aims to reintroduce the city of Milwaukee to its harbor, is returning this year. The family-friendly festival features free activities  related to boats, aquatic life, rivers and science. Attendees will get a chance to tour the UW-Milwaukee School of Freshwater Sciences, release a baby sturgeon with the Riveredge Nature Center (pre-registration required), learn how to filet a fish and more. Local food trucks will be on deck, and New Barons Brewing Coop will be pouring beers. DJ Hala and Cache will keep the party going with live music. The event will run from 11 a.m. to 4 p.m. and will take place on the 600 block of E. Greenfield Ave. in the Harbor District. Click here for more information.

The annual Milwaukee Riverkeeper Boat Parade will once again feature local artist and performers showcasing their talents either with their float creation or with a performance on top of said floats. The parade will begin at 12:30 p.m. at HarborFest and will run along the Milwaukee River, reaching a point near the Hoan Bridge at 12:50 p.m. and turning around at Lakefront Brewery at 1:45 p.m. The parade is a celebration of Milwaukee’s waterways, and floats are typically representative of some form of aquatic life, with some exceptions like artist Jeff Holub’s “Shadow Puppet Folklore” themed float this year. For a map of the parade route, click here and find a spot to post up and cheer on Milwaukee’s waterways.

Fox & Beggar Theater is bringing Goodnight, Absalom, a dark comedy drenched in surrealism and featuring puppets, to Humboldt Park. The entire performance will take place on a hand-painted, solar-powered Vaudeville stage. A whimsical critique of American capitalism, Goodnight, Absalom fuses street theater, puppetry and contemporary dance into a performance that is one-part Spaghetti Western and one-part love letter to William Faulkner. The performance is free and begins at 7:30 p.m., followed by a short audience Q&A session after the roughly 75-minute running time.