Should Water Street Be Gun-Free District? 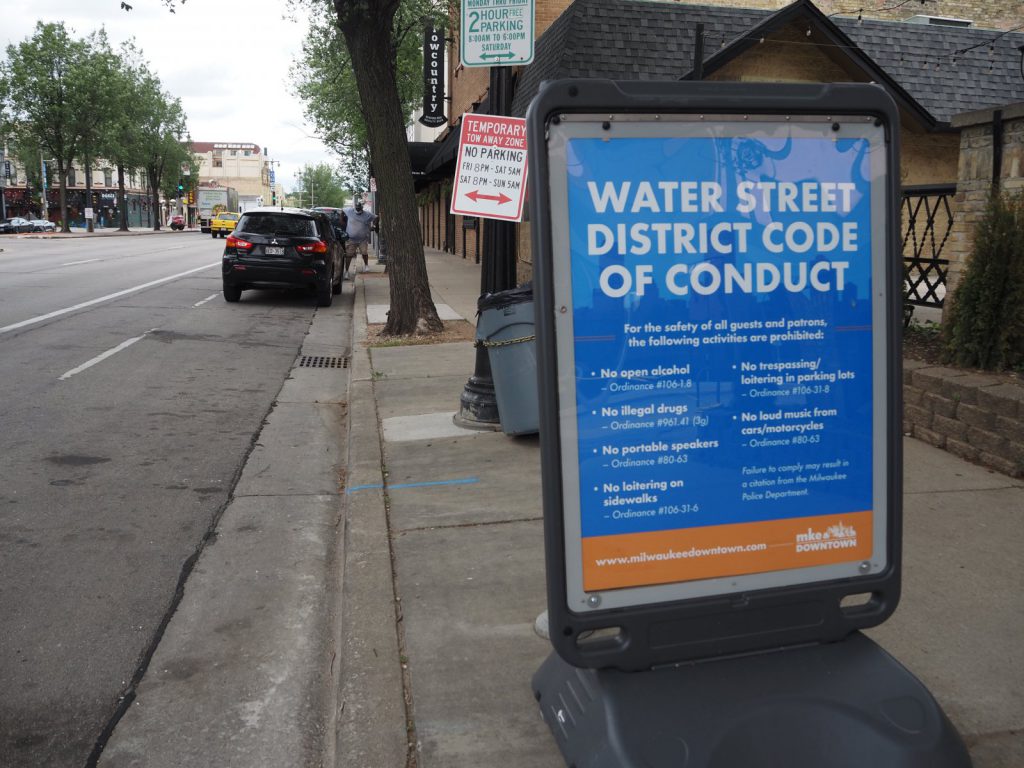 It’s one of many options on the table.

Late-night safety issues came to the forefront earlier this summer as pre-pandemic levels of patrons returned to many downtown bars. Another crowd began to form outside the bars. “We began to see issues of parties and cars, public nuisance issues, gun violence, fights and issues in general regarding public behavior,” said Milwaukee Downtown President Beth Weirick in introducing Peters during a virtual panel discussion Tuesday afternoon. At least six shootings took place in July, including one on the night the Milwaukee Bucks won the NBA championship.

Weirick said the goal is to “once again elevate the fabulous experience so many people have in our nighttime entertainment districts.”

Kim Kimbrough, executive director of Kansas City’s Westport Regional Business League business improvement district, detailed how temporary barriers are erected around the Westport bar district each weekend. From 11 p.m. to 3 a.m. anyone seeking entry must be 21 or older and not be carrying a weapon. Individuals must go through a metal detector staffed by a private security firm and an off-duty law enforcement officer.

He said the changes were spurred by the Missouri Legislature making the state’s gun laws among the laxest in the country. “We started seeing literally [people with] AR-15s, AK47s walking up and down our streets at night,” said Kimbrough. “It really opened our eyes.”

Kimbrough said a surge in gun-related incidents was hurting both nighttime and daytime business, with the effects measurably felt for months after incidents. Now guns and other weapons are banned. “Weapon offenses are down 69%,” he said of the area.

By banning all carry-ins, including non-alcoholic beverages, and prohibiting people under 21 from being in the area after 11 p.m., there also has been a perceived improvement. “There is rarely a night that passes that we don’t turn away at least 60 [people] that can’t produce a valid ID that shows they are 21 or [have] a bad fake,” he said.

He said business owners were okay with paying more to the district to pay for the security costs. “It is money well worth it in terms of our gross receipts,” said Kimbrough.

Jon Shivers, director of the city-affiliated Beale Street Management in Memphis, also oversees a secured district. Shivers said his three-block district is secured every night with temporary fencing. But it comes with an unusual twist: all of the property, including the buildings leased to bars, are publicly owned. The operation is similar to the Kansas City model, but also includes a $5 security cover charge on particularly busy nights. Shivers said the fee was challenged in court, but his organization prevailed.

There is a distinction based on the size of the organization. Shivers noted that the Memphis Police Department must deal with issues related to food trucks and crowds just outside of the perimeter, particularly on nights when the cover charge is in effect.

“We don’t really have some of the nonsense that Jon referenced,” said Kimbrough. He noted that his organization has worked with the city on permitting rules for things like food trucks and loitering for the areas around its security perimeter. The Kansas City Police Department also works to block people cruising in vehicles.

An entirely different strategy is in place in New Orleans. Brittany Mulla McGovern, executive director of the French Quarter Business Association, shared how bollards are used to block vehicle traffic at peak times, but otherwise there are not metal detectors and a security perimeter. Nor does she expect to see such a perimeter in her lifetime.

“Nobody wants to wand somebody that is coming to stay at their hotel or eat at their restaurant,” said Mulla McGovern of the challenges with the many different uses in the French Quarter.

The area does allow public consumption of alcoholic beverages, similar to Memphis. But she said that creates its owns challenges. The public works department must routinely clear out drains because they are filled with to-go cups. Enforcement also becomes an issue because once people are in the street the bars are no longer responsible for behavior.

Milwaukee Police Department Captain James Campbell, who oversees Downtown, asked a number of questions including how permitting works, if law enforcement officers are needed for security and what types of barriers are used. “We obviously have had our challenges this year,” he said.

None of the security perimeters require regular permitting, but some rely on legal loopholes. The sidewalks in Kansas City were transferred to private ownership to allow them to be closed.

A final report from RHI is expected to be delivered by October 8.

One thought on “Should Water Street Be Gun-Free District?”