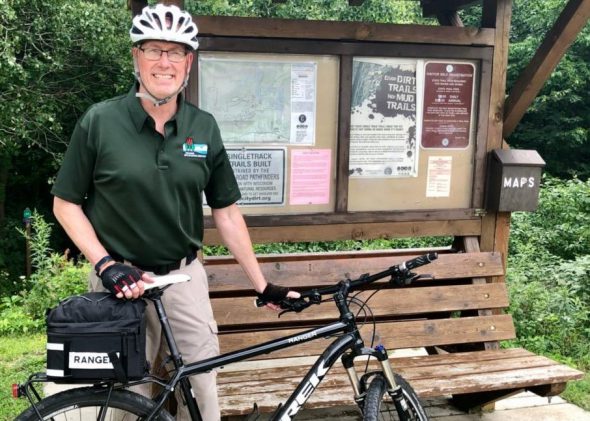 Visits to Wisconsin state parks this year have increased 18% compared to 2020, and increased 36% over pre-pandemic 2019. So far, Wisconsin Department of Natural Resources has logged more than 9.6 million visits to state parks in 2021.

“So it’s just been a huge increase in use of state properties, and it’s great to see,” says Steven Schmelzer,  the new director of state parks and recreation management who started in the job July 19.

A Baraboo resident and native of Madison, Schmelzer began with the DNR in 1992, as a ranger at Devil’s Lake State Park. In his new role he helps oversee 49 state parks, 15 state forests, more than 500 boat launches, 44 state biking trails and more than 5,000 campsites.

“To be honest, I hadn’t really aspired to take this position until probably six or seven months ago,” says Schmelzer, who holds a bachelor’s degree in recreation resource management from the University of Wisconsin-Madison. But he had experience.

“Everything you can think of, and things you haven’t thought about – I’ve probably done them,” he says. That includes fighting wildfires.

“That’s hard to do but that’s part of the job,” he says. “Grab a backpack sprayer and go up on the bluffs, doing that. And then the next day might be helping someone involved in a car accident or boating accident. I mean, it was very diverse, and that’s one of the great aspects about the job.  It’s a service. You’re serving the visitors who are coming to the property. Myself, and a lot of the folks who come into the profession, enjoy that.”

In 1999 Schmelzer was promoted to assistant park superintendent at Devil’s Lake. In 2008 he was promoted to superintendent. In 2020, he was selected as district park supervisor for the DNR’s Southwest District, covering eight counties and 18 different properties. He was in that position less than a month when the pandemic hit. Operation of state parks was named an essential service.

“I am extremely proud of the staff and all that they’ve done in a year and a half now, really stepping up,” he says. “We’ve been working and providing that outdoor outlet for folks, and get outside and get fresh air and recreate.”

While the great outdoors offer spiritual comfort, the joy of discovery and physical challenge, Schmelzer points to another benefit.  “It’s a huge economic driver,” he says.

A 2013 study by the DNR and UW Madison-Extension found that visitors to state parks and related properties spend between $41 and $90 a day, per individual trip. And that isn’t just park fees. From firewood and bait to bug spray and beer, the total economic impact to Wisconsin totals more than $1 billion annually.

“Sometimes it’s forgotten about, the impact that tourism has in Wisconsin,” says Schmelzer.  “It’s something we need to continue to highlight.”

Meanwhile, the state parks system has challenges. In 2015, Gov. Scott Walker cut state support to zero, forcing state parks to become self-supporting. By last autumn the cost of correcting deferred maintenance was already estimated to be more than $69 million.

Federal dollars for COVID relief may or may not be coming to Wisconsin State Parks.  “I don’t know where that sits right now,” says Schmelzer. “My understanding is it’s still a possible. I hope we can continue to stay in the running for some of those moneys. And if not, we’ll have to take a look at some other things. ”

Another challenge is the changing nature of nature itself. Under Gov. Walker, the DNR dropped language in its website referring to the fact that the earth’s climate is changing and that human activities are the main cause. The wording has since been restored.

“When I was at Devil’s Lake, we had two 500-year floods and a 1000-year flood,” he recalls. “So after a couple of those, I thought, well, this is kind of a wakeup call. It’s a scientific fact that global warming is here, and that has implications across the whole system.

“We have to take that in consideration for making management decisions. I’ve had a long career at the department, and my intention is to leave a legacy for all the folks who are coming behind me.”

Busiest ever state parks face challenges under new chief was originally published by the Wisconsin Examiner.

One thought on “Meet The New State Parks Chief”