By Danielle Kaeding, Wisconsin Public Radio - Sep 24th, 2020 10:41 am
Get a daily rundown of the top stories on Urban Milwaukee 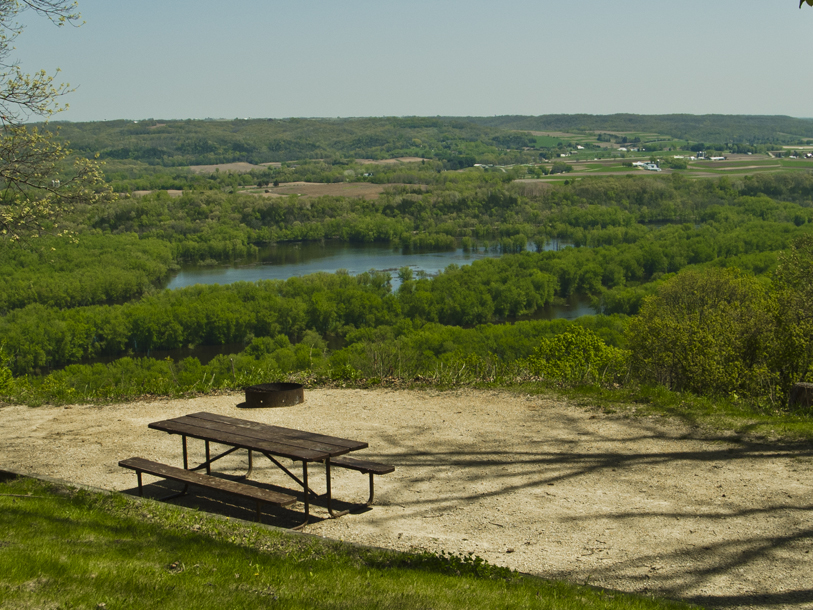 A campsite at Wyalusing State Park in western Wisconsin. Photo by Kenneth Casper (CC BY 2.0)

Deferred maintenance at state parks and properties makes up the vast majority of $93 million requested for capital projects under the budget proposed by the Wisconsin Department of Natural Resources. The request comes as state parks have seen more than 6 million visitors since the beginning of the COVID-19 pandemic.

Wisconsin DNR staff detailed the agency’s budget request before the Natural Resources Board on Wednesday, which unanimously approved it.

The proposed $564.3 million budget represents a 0.3 percent increase in the DNR’s budget even as state agencies are cutting $300 million from their budgets after Gov. Tony Evers directed them to make reductions due to the coronavirus pandemic. The governor will consider the DNR’s budget proposal when he crafts his own state spending plan.

Deferred maintenance accounts for $69 million of funding requested for capital projects, according to Terry Bay, the agency’s facilities and lands bureau director.

“Some of these projects have been requested over multiple biennial cycles and are in the most dire need of significant repair,” said Bay.

Those projects include repairs to general facilities, fish hatcheries and boat launches. They also include replacement of buildings like ranger stations, as well as restroom and shower facilities. The funding request would address 292 projects, of which 16 would expand existing facilities or cost more than $1 million to repair.

Additional projects that seek to address health and safety at parks and properties cost $13.5 million.

Bay said the DNR has 40 percent of all building inventory in the state. Natural Resources Board Chairman Fred Prehn said those properties need to be maintained, adding that now is a good time to borrow for projects with interests rates at an all-time low.

“The knee-jerk reaction is we can’t spend any money because people are hurting,” said Prehn. “We have to look at the long-term. What are the long term implications of the budget. We have an obligation to put our policies in motion. The department’s got obligations to maintain the structures.”

Prehn noted that parks saw a 52-percent increase in weekend visitors by early June. Evers ordered 40 parks closed in early April, citing overcrowding that could speed up the spread of COVID-19. The majority of those parks were reopened in May. He expects the parks will continue to see increased traffic.

“People have a taste of the outdoors,” he said. “They’re not going to give it up.”

“I do understand that we are in a very low-interest rate environment, but how much debt do we want to put on the shoulders of our children and our grandchildren?” Hilgenberg said.

If the economy improves, Bay noted that any funding requests removed from the proposed budget would have to be approved separately by lawmakers.

Board Member Bill Bruins said the fact that the majority of capital funding would be reserved for deferred maintenance is a “big red flag.” He said the governor and lawmakers need to realize the state’s responsibility to maintain public properties.

“They’d better decide not to handicap the department any longer with trying to operate with insufficient funds,” said Bruins. “They’d better get the money either from the taxpayer or the user — one of the two — because the system is broken and needs fixing.”

Board Vice Chair Greg Kazmierski said part of the problem is the way in which the Legislature has authorized funding for the Knowles-Nelson Stewardship Program. He said the state should include maintenance and capital improvement funding as part of bonding for the program.

The agency has requested the renewal of stewardship funding for another 10 years and increasing its borrowing authority from $33 million to $50 million annually. Republican lawmakers have raised issues with the program, saying it takes up too much debt and removes private land from the tax rolls.

Former Republican Gov. Scott Walker proposed cutting general purpose funding for state parks in 2015, which was approved by lawmakers. The DNR was told to generate funding based on user fees and other revenue sources. In 2018, the agency raised camping fees at 38 properties and entrance fees at three popular parks.